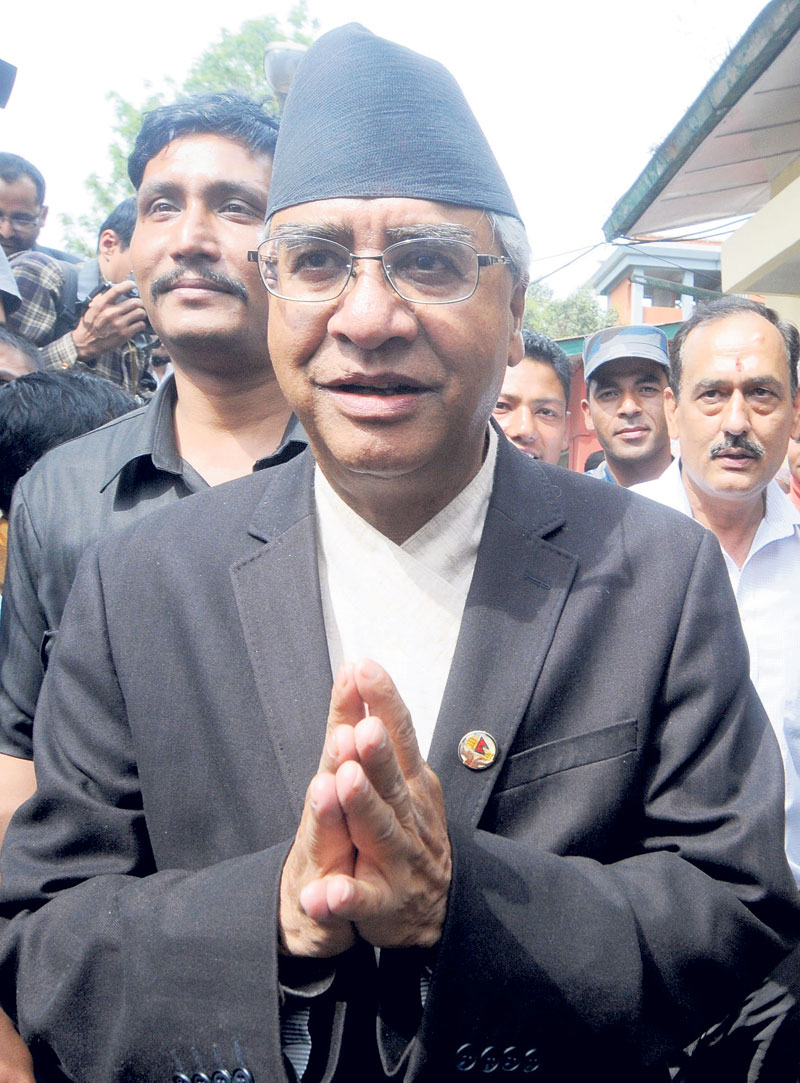 KATHMANDU, Oct 21: Nepali Congress (NC) President Sher Bahadur Deuba has hinted that NC would stand in favor of moving forward with the impeachment motion against chief of the Commission for the Investigation of Abuse of Authority (CIAA) Lokman Singh Karki.

Speaking at the party's Central Working Committee (CWC) meeting on Thursday, Deuba accused Karki of acting in arbitrary manner exactly in the way the royal commission acted under former king Gyanendra Shah's regime. "Lokman Singh Karki had been threatening and harrassing sundry individuals by misusing his authority as the chief of the CIAA," NC CWC member and Health Minister Gagan Thapa quoted Deuba as saying.

NC's support is a must for passing the impeachment motion. On Wednesday, a total of 157 lawmakers from the CPN-UML and the CPN (Maoist Center) had registered the motion in parliament.

While arguing that the latest the political action against CIAA chief Karki was the outcome of his own working style, Deuba said that the impeachment motion registered against Karki had brought about a celebratory mood across the country. Majority of NC CWC members speaking during the meeting on Thursday had sought the party president's view on the impeachment motion against Karki.

Deuba had informed the CWC members that although UML Chairman KP Sharma Oli and Maoist Center Chairman Pushpa Kamal Dahal had informed him about the impeachment motion there was no discussion on registering the motion on Wednesday itself. "We had discussion on the issue yesterday. But the prime minister did not say anything about registering the motion on the same day. They do not seem to have political honesty," he further said.

While Biswa Prakash Sharma seconded Thapa's view, two other CWC members -- Bimalendra Nidhi and Dr Ram Sharan Mahat -- had tried to defend Karki. According to a CWC member, Nidhi had argued that some Maoist leaders including Janardan Sharma had misused the signatures of Maoist parliament members to register the motion and that prime minister himself did not know about the motion registered in parliament.

Likewise, Dr Mahat had argued that it would be too early to take any decision on moving forward with the impeachment motion against Karki. He maintained that they do not know yet about the charges against Karki and the Impeachment Recommendation Committee has yet to make any such recommendations.

Speaking on the occasion, CWC member Krishna Situala had argued that NC should consider both the pros and cons of any decision regarding the impeachment motion. While adding that Karki is already unpopular among the general public, he said that failure by the NC to support the impeachment motion could help develop a new coalition between UML and the Maoist Center.

Speaking at the conclusion of Thursday's meeting, President Deuba said that the ongoing CWC meeting should arrive at a consensus through discussion on the issue of impeachment against Karki. He had complained that Karki did not mend his working style despite his repeated suggestions to do so in the past.

KATHMANDU, Sept 23: At a time when he is already courting serious controversy back home for forming the largest-ever cabinet,... Read More...

CAAN’s income declines by 43 percent; Rs 41.1 billion allocated for current FY
7 hours ago
Kotal area in Kathmandu sealed off due to COVID-19 risk
8 hours ago