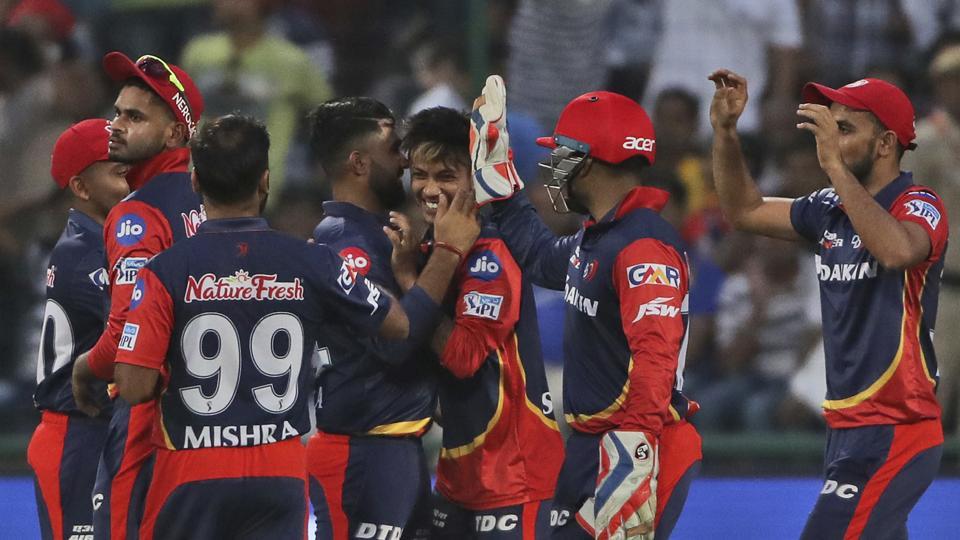 Delhi Daredevils celebrate their 11-run victory over Mumbai Indians in the penultimate game of the league phase of IPL 2018 at the Ferozeshah Kotla in New Delhi on Sunday.(AP)

Delhi Daredevils defeated Mumbai Indians by 11 runs to knock the defending champions out of IPL 2018.

MAy 21: Holders Mumbai Indians were eliminated from Indian Premier League after their 11–run defeat in the final league game against eliminated Delhi Daredevils here at the Ferozeshah Kotla ground on Sunday.

Needing just a victory to seal qualification as the fourth team due to their superior net run rate, Mumbai Indians made a hash of chasing a none-too-difficult target of 175 and eventually folded for 163 with three balls to spare.

Ben Cutting kept hopes alive with a superb 20-ball 37, but fell in the second ball of the final over with 12 needed off the last four deliveries bowled by Harshal Patel.

The result left Rajasthan Royals (14 points) in the fourth spot on points table, behind Sunrisers Hyderabad (18), Chennai Super Kings and Kolkata Knight Riders (both 16). Only a huge win for Kings XI Punjab (12 points) over CSK in the final league game can keep RR out. MI finished on 12 points, paying the price for a poor run in the early part of their campaign.

Opener Evin Lewis made a solid 48 to provide early momentum, but one batsman after another went for big shots on a pitch that played slow after being baked under the sun.

Evin Lewis, struck below his ear off a Liam Plunkett bouncer, lost focus and was stumped but all other batsmen perished attempting big shots.

It was nothing more than a consolation win for the already eliminated Delhi Daredevils, but it was delivered by two leg-spinners on either end of their career spectrum.

Teenaged Nepal bowler, Sandeep Lamichhane (3/36) delivered crucial blows along with Amit Mishra (3/19) and were helped hugely by the reckless shot-making of the Mumbai Indians batsmen.

Lamichhane, asked to open the bowling, had got Suryakumar Yadav caught after being hit for a four and six. Brought back in the 10th over, he saw Glenn Maxwell and Trent Boult do the relay catch on the boundary to dismiss Kieron Pollard (7). The dangerous Trinidad all-rounder has hardly clicked for Mumbai Indians this season.

Rohit Sharma (13) and Hardik Pandya (27) promised a revival as they took on Trent Boult, hammering 17 runs in the 13th over, pushing the target to just over 50 in the 14th over.

Delhi Daredevils were once again led by Rishabh Pant, who struck his fifth half-century of the IPL season. Pant hit 64 (44b, 4x4, 4x6) and raised 64 runs with Vijay Shankar, who was 43 not out in the end.

KATHMANDU, May 13: Nepal’s teenage sensation Sandeep Lamichhane was handed his first cap by Delhi Daredevils in their twelfth match of... Read More...