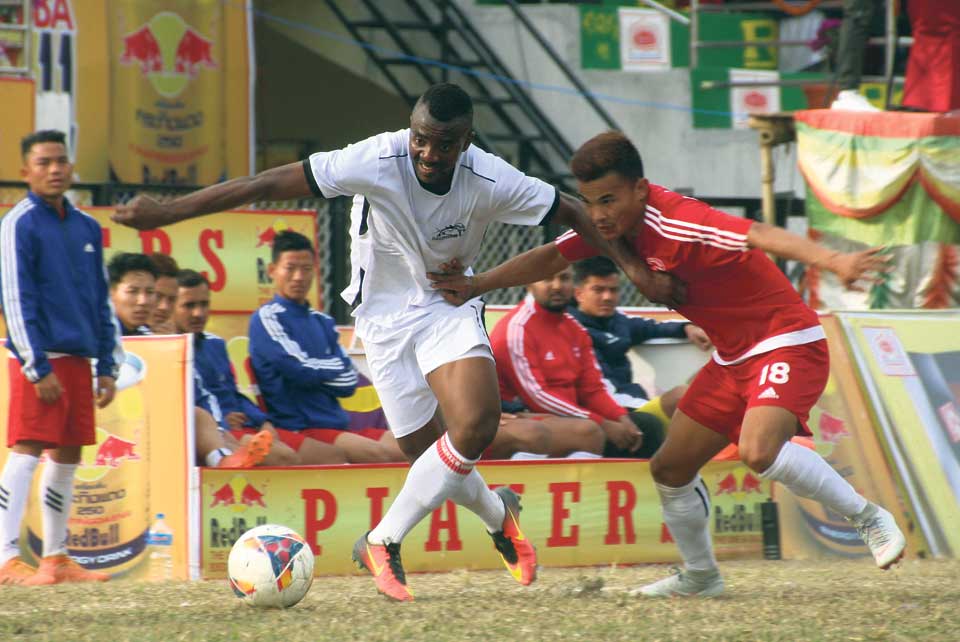 In the second semifinal match, the game was pushed directly into the tie breaker due to limited time after the regulation time ended in a goalless draw.

The game went to sudden-death after the teams failed to find a winning goal playing a 5-5 draw in the tie breaker.

Dauphins has managed to reach the final of the Budha Subba in its first participation and will vie for the title having won the Manakamana Cable Car Pokhara Cup defeating the other departmental team Armed Police Force (APF) Club four days ago.

Priso was named the man of the match and was rewarded with Rs 15,000.

Dauphins created a lot of chances to score in the match, but could not convert them. Owana carried the ball forward by himself in the fourth minute, but the Police defense cleared it. Ilewem hit a free-kick in the 12th minute, but Police keeper Satrughan Chaudhary punched the ball.

Yannick gave a long ball to Dider Tina, but he could not head the ball properly in the 37th minute. Angolo hit a corner, but Yannick’s header went wide in the first half injury time.

Ilewem put a long throw ball looking for Patenga, but his header was saved by Chaudhary in the 59th minute, while Yannick beat the keeper in the 40th minute, but Dhimal cleared the ball.

Police could not attack more as it would have hoped for, but Man Bahadur Pariyar passed the ball to Nir Kumar Rai, but his shot was saved by keeper Priso in the 10th minute.

Dauphins Orel Inem expressed his happiness for reaching the final and appreciated Police’s performance in the game. He added that even though his team has no time for rest, the performance will not be any lesser.

“Police played high standard football, but we played better and we won. We will play more of the same like today,’’ Inem added.

Police head coach Anant Raj Thapa said that the players did well in the match, but the penalties proved to be bad luck for his team.

“It was a physically tough match, but we played well. Penalty is a stuff of luck and we did not have it,’’ Thapa said.

Govt not in favor of a complete shutdown: Health Minister Khatiwada
10 minutes ago