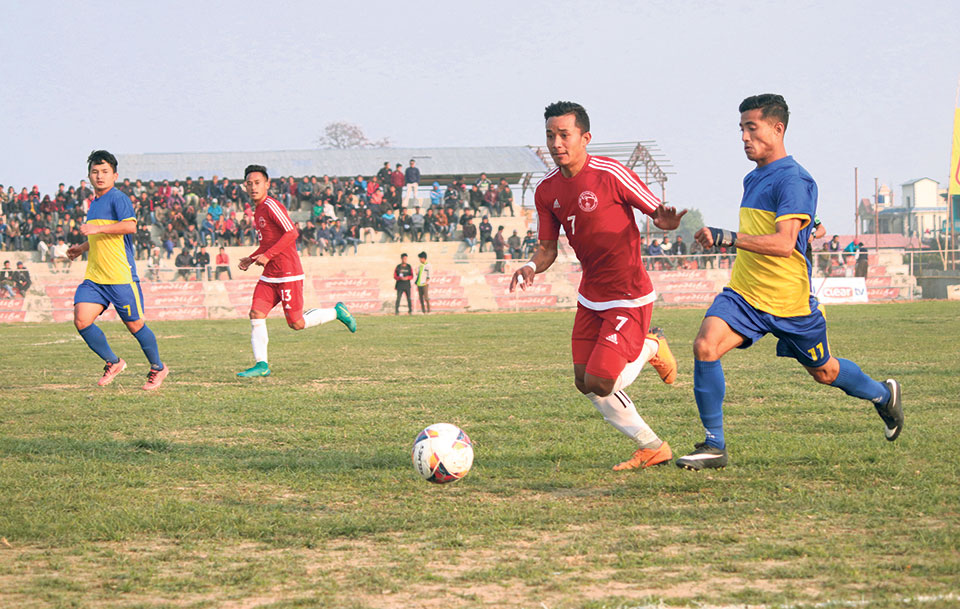 Players of Nepal Police Club and CFC Club of Bhutan in action during a quarterfinal match of the Madan Bhandari Memorial International Invitational Gold Cup football tournament at the Itahari Stadium in Itahari on Tuesday. Photo: Amar Khadka/Republica

In the last quarterfinal match played at the Itahari Stadium, a brace from Abhishek Rijal helped the departmental team advance into the last four.

Despite denying Police from scoring, CFC could not withstand the pressure from the departmental team.

Rijal scored his first goal in the 63rd minute and completed his brace in the first minute of the injury time.

Rijal converted in a cross from Tirtha Rana which struck the post and went in, while he scored a solo strike for his second.

Rijal was named the man of the match for his brace and was rewarded with Rs 10,000.

With the win, Police will now take on the A-Division League champion Manang Marshyangdi Club in the second semifinal match on Thursday.

It was the first time CFC played a tournament in Bhutan. Earlier, it had played Gold Cups in Biratnagar, Dharan and Pokhara. It had played the Budha Subba Gold Cup in Dharan, while it played Pokhara’s Aaha Rara Gold Cup two times each. Also, it had played in Ilam and Dhankuta once each. However, it has not been able to lift a single trophy as it mostly gets knocked out of the tournament from the first round.

Police head coach Ananta Raj Thapa said that the good combination from his players in the second half helped the team register a win. “We had not been able to watch Bhutan’s team play. They had most of the young players who are capable of playing pace football. It was tough for us in the first half as we did not know about the quality of the ground,’’ Thapa said, “When we scored in the second half , the players looked confident and played coordinating properly.’’

He also added that after scoring the first goal, the team scored the second because of playing in the same rhythm.

Bhutan coach Bikash Pradhan said that playing first time in a different ground and not being able to bring the full team cost the team the game.

“The confidence of the other players went down when three foreign players could not come due to visa problems. We needed experience in playing in that ground, so that cost us too,’’ Pradhan moaned.

The other departmental team Tribhuvan Army Club will take on Mechi Netralaya Kakarbhitta Football Training Center in the first semifinal on Wednesday.