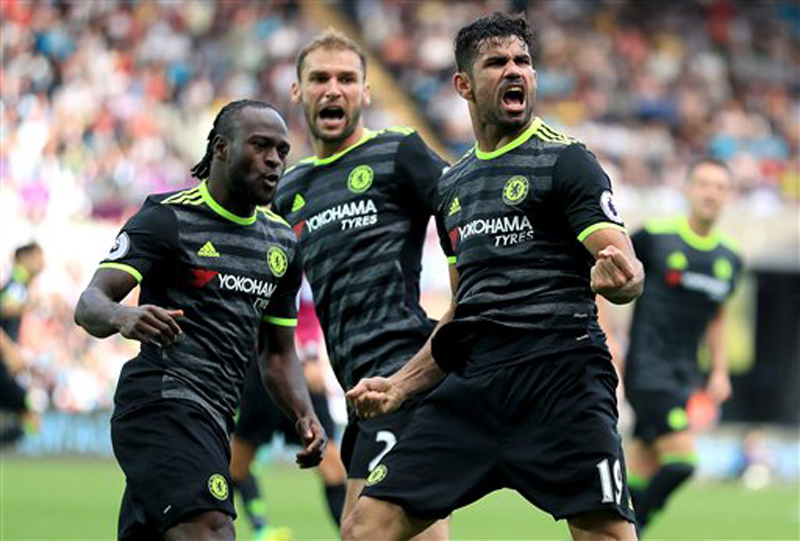 The Spain striker capped a bustling display by scoring from an 81st-minute overhead kick toearn Chelsea a 2-2 draw at Swansea in the English Premier League on Sunday.

Costa, who also put Chelsea ahead at Liberty Stadium, is looking back to his best this season with four goals from four games, having struggled for form for much of last season. He is proving a nightmare to handle for defenders — as Swansea center backs Jordi Amat and Federico Fernandez would attest.

They constantly fouled the hot-headed Costa, who stood up to the physical challenge and gave it back in return, and Amat in particular was fortunate not to get sent off for repeat fouling in a niggly but enthralling game.

"From the first to the 94th minute, he took a lot of kicks," Chelsea manager Antonio Conte said. "It's incredible the defender finished the match."

Costa's acrobatics salvaged a point for Chelsea after two defensive blunders in a three-minute span almost gifted Swansea a victory.

Gylfi Sigurdsson converted a 59th-minute penalty down the middle after being tripped by Chelseagoalkeeper Thibaut Courtois in a rare attack by the home side. Then Leroy Fer dispossessed Gary Cahill, perhaps illegally after appearing to kick the Chelsea defender's heels from behind, and poked in a shot that squirmed through the legs of Courtois and over the line.

Cahill said he went to see referee Andre Marriner after the game about the incident. "Clear, clear foul," Cahill said. "You could be sat on the moon, the top of the stand, anywhere in the stadium, you can see that's a clear foul for me."

"Huge disappointment because we had control most of the game," Chelsea defender Cesar Azpilicueta said. "Their two goals came from our mistakes."

The result leaves Manchester City as the only team with a 100 percent record after four games.Chelsea is in second place on 10 points.

Costa, who has scored more Premier League goals against Swansea (seven) than any other opposition team he has faced, got booked for the third time this season for fouling Fernandez in one of their many tussles.

He might have received a second yellow card for falling to the ground as Swansea goalkeeper Lukasz Fabianski came out to challenge him midway through the second half.

"Diego Costa's work is reflected in this game," Azpilicueta said. "When he is scoring goals, we are doing the right things."

David Luiz, signed by Chelsea for 32 million pounds ($42 million) on the final day of the transfer window, was a substitute and didn't come off the bench.