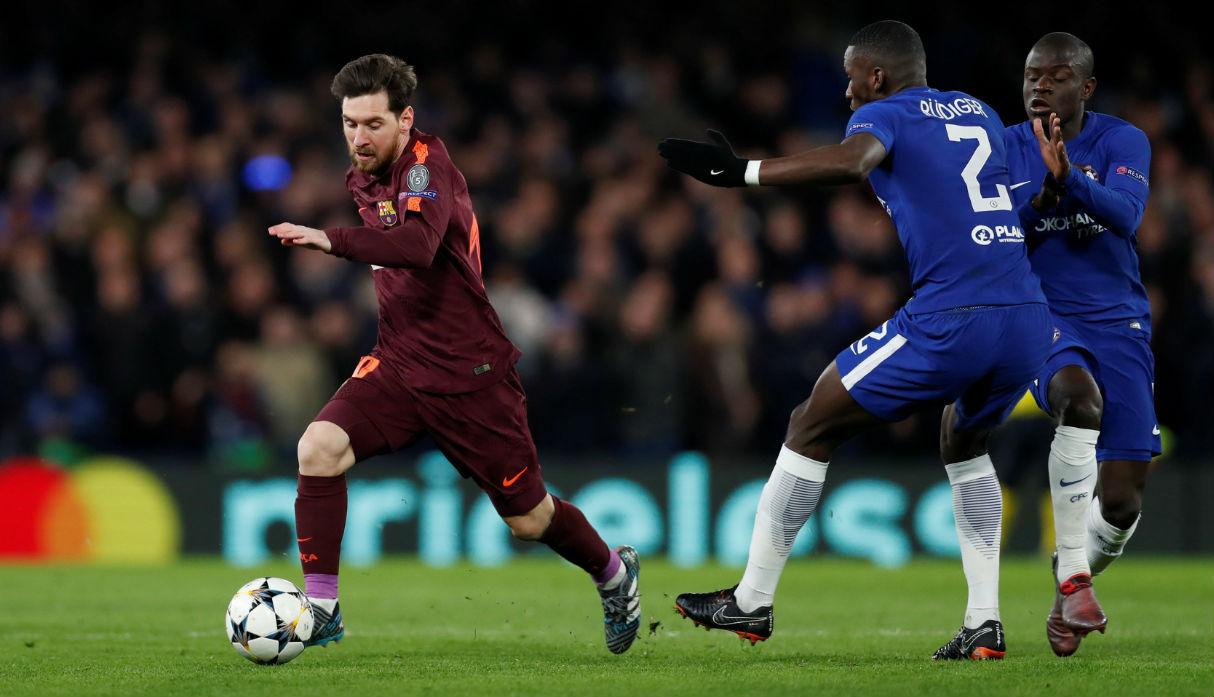 FEB 21: Argentina icon Lionel Messi denied Chelsea a famous victory with his first goal in nine matches against the Blues to hand Barcelona the edge in this engrossing UEFA Champions League round-of-16 opener.

Messi had been anonymous in a first hour dominated by Brazil winger Willian. He struck the woodwork twice, before finally slotting in from the edge of the box to give the hosts a deserved advantage.

But a defensive disaster on 75 minutes granted Messi the opportunity he craved, converting Andres Iniesta’s instinctive pass to claim a valuable 1-1 away draw.

Even on a quiet night, Messi reserves the right to be utterly decisive.

Was boxed in well by Chelsea’s 3-4-3 formation and his mark for being dispossessed was four more than nearest Barca team-mate Andres Iniesta.

There was one warning sign for the hosts when he magically managed to create room for a cross early doors which Paulinho could not convert. Messi remained patient and waited to see if Chelsea would crack, Christensen’s unfathomable error allowing him the chance he craved.

AN ASSASSIN IN FRONT OF GOAL – There were few signs that goal no27 of another prolific campaign was going to be notched at Stamford Bridge.

But you can never discount Messi. Cold blood flowed through him in his only moment of opportunity.

One shot, one goal. Barca had found salvation from the usual source.

LOSING CONTROL – Messi can rarely be accused of being wasteful. This was one of those games.

Chelsea’s tactical plan worked a treat – it allowed him to run down dead alleys and they worked diligently to cut off out balls. In a team visibly lacking searing pace, this forced the great man to try and do too much himself.

He will need to be cuter in the tests ahead, if Barca complete the job on home soil.

15th min CHANCE CREATED: Messi’s generation-defining talent comes from his preternatural ability to conjure situations no other players can conceive, or achieve.

Stamford Bridge saw another example on Tuesday night when he took the ball under pressure on the edge of the penalty box and then exhibited superhuman peripheral vision to instantly cross from an unorthodox angle. But Brazil midfielder Paulinho could only head wide.

75th min GOAL: An invitation to score is never one that Messi will pass up. In his only shot of the game, he calmly stroked the ball past wrong-footed goalkeeper Thibaut Courtois at his near post, following a cataclysmic run of errors at the back for Chelsea.

Denmark centre-back Christensen first played a suicidal ball across the penalty box, before Spain utility man Cesar Azpilicueta belied his experience to charge out. All that was left was for the great Iniesta to play in Messi, who did the rest to end his personal drought against Chelsea.

Messi has played far better than this against Chelsea and come away with nothing, such as when he struck the woodwork twice – once from the penalty spot – in 2011/12’s classic semi-final.

His very presence causes concern and this was on show for his goal at the ninth time of asking against Antonio Conte’s men. Even though he’d been – by his ludicrous standards – invisible, not one person at Stamford Bridge doubted the result when Iniesta teed him up with 15 minutes left.

In the wider spaces of the Camp Nou and with Chelsea likely to be chasing goals at some point, more should follow in the second leg.