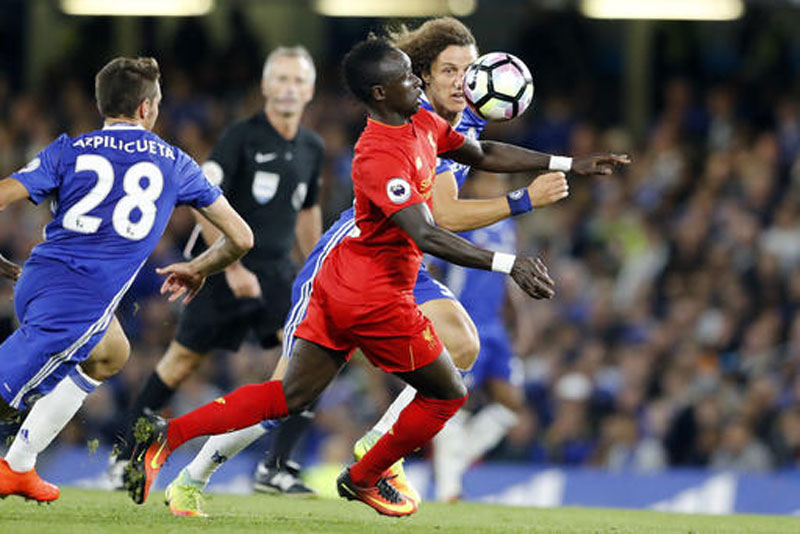 Keen to establish a high level of consistency, Liverpool backed up a 4-1 win over titleholder Leicester by outclassing Chelsea at Stamford Bridge, where the visitors posted consecutive wins for only the second time in 40 years.

Liverpool, more energetic and inventive, was 2-0 up in about half an hour and controlled proceedings for an hour. Not until a leaping Diego Costa volleyed in a pop-up pass from Nemanja Matic to put Chelsea on the scoreboard did the match begin to feel competitive.

But not for long, as Liverpool weathered Chelsea briefly coming out of its slumber, and returned to smothering the Blues.

Only Manchester City and Everton remain unbeaten in the league. Chelsea dropped to third and Liverpool rose to provisional fourth to start the fifth round.

Having already beaten last season's league champion and runner-up, Liverpool's third win in five games makes the second-round loss to promoted Burnley even more confounding. On Juergen Klopp's watch, Liverpool has been strong against Chelsea, Arsenal, Tottenham, and the Manchester clubs, remaining unbeaten in six away games against them, and losing only once in 11 matches.

London has been especially welcoming for Liverpool in the first month, with wins over Chelsea and Arsenal, and a draw at Tottenham.

Lovren was so comfortable that he even scored the opener. Given a free kick conceded by Chelsea stand-in captain Branislav Ivanovic on the left sideline, Liverpool eventually gave the ball to Philippe Coutinho, who spotted Lovren and two more teammates unmarked at the far post.

It became 2-0 with a cracking goal from captain Jordan Henderson. He accepted a clearance from Chelsea on the left side of the box, had time to sight the posts, and unleashed a dipping shot into the top right corner of the goal.

Chelsea, sure to have been blasted at halftime by manager Antonio Conte, started the second spell better, with Matic getting in behind the defense, tiptoeing along the byline, and dinking the ball inside for a leaping Costa to volley in his league-leading fifth goal in five games.

But Chelsea never threatened again, as shots clattered off the legs of Liverpool defenders.

Only the relentless N'Golo Kante, in midfield, gave Liverpool trouble. And the second Chelsea debut for expensive defender David Luiz finished like his first in 2011, a home loss to Liverpool. But on a night when he got his nose bloodied in a clash of heads, he couldn't be faulted for Chelsea's failings at the back.

Canadian citizen busted on the charge of pedophilia
16 hours ago

Agreement between Nepal Tourism Board and India's TAAI
17 hours ago