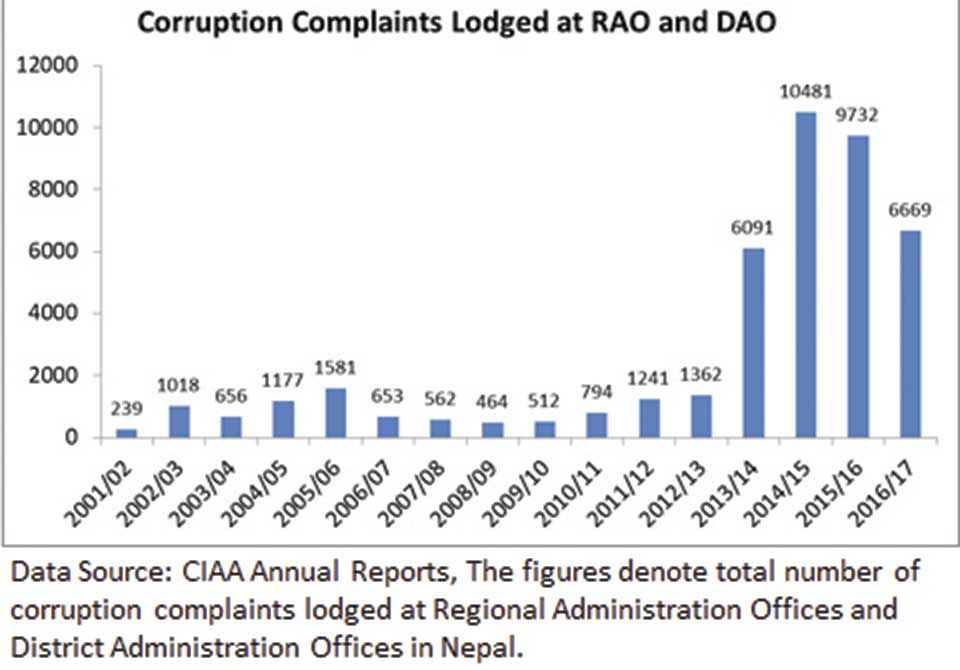 Nepal’s monarchy was literally having a jolly ride on a chariot pulled by two wheels—Hinduism and the centralized unitary state. These two wheels had to be dismantled to bid farewell to monarchy. The 2006 People’s Movement did just that. But some sections of Nepali intelligentsia have failed to grasp the reason for installing secularism and federalism. Many say these issues were imposed by external forces, particularly the Westerners.

Having defined secularism in a diluted form in the constitution, status quoists are determined to foil federalism. A line of thinking is that a small and poor country like Nepal cannot afford federalism and that it is going to be an economic disaster for Nepal. If economic logic is to be extended further one can argue with equal force: Is Nepal an economically viable country? In this article I will take up the issue of corruption implications of federalism. What will be the impact of federalism on corruption and vice versa?

Similar to relationship between democracy and corruption, there are two schools of thought on federalism and corruption. The first line of thought has it that with the breakdown in central control over resources, corruption too will decentralize. There will be elite capture of development programs thereby spiraling corruption at the grassroots level. The second line of thought argues otherwise: Federalism will cure corruption. With more and direct participation and monitoring of public resources, public accountability will be established and this will help control corruption.

On March 4, while taking oath of office, parliamentarian Rajendra Prasad Lingden voluntarily extended his oath with additional words: “Indulging in corruption is tantamount to sucking mother’s blood.”  This very unusual oath has triggered several anticorruption commitments from other politicians, including declarations by some provinces as ‘corruption free zones.’ It is yet to be seen whether such declarations are mere political stunts or translate in real commitments to fight corruption.

Impact of federalism on corruption will be determined by a number of factors: whether fiscal federalism is tilted towards revenue or expenditure sides, whether resources will be captured, teething problems, overall capacity of local governments and effectiveness of local-level anti-corruption mechanisms. With ages of dependency on the center (for political and economic power), local governments have been reduced to a farcical level. Or one could say: If in ancient times Kathmandu was Nepal, in modern times Nepal is reduced to Kathmandu.

The political vacuum created by prolonged absence of elected leaders (2002-2016) has also helped to breed massive corruption and elite capture at the local level, even forcing the CIAA to quash all-party mechanism.

Successive efforts by donors to install social accountability measures—such as participatory budgeting, public hearing, citizen charter, social audits etc—have also failed. In the absence of right to taxation and freedom to mobilize local resources at the local level, it will be really difficult to implement federalism in Nepal. Similarly, given the degree of corruption at the local level, center might resist devolving more fiscal authorities.

RAOs were authorized to handle complaints related to above second class officers while DAOs would take care of public servants below third class level. Since the establishment of outreach offices, save in some districts, the CIAA has stopped publishing district level corruption data. So what we have now is a composite number of complaints registered at the regional offices. The chart alongside depicts total corruption complaints at regional and district levels.

There is an abrupt rise in corruption complaints in and from 2013/14 onwards. The establishment of CIAA outreach offices must have eased public registering corruption complaints. Alternatively, this could also be due to increase in local level corruptions or interaction of both. More granular study can figure out the real cause, but these figures provide some base line information. The decline after 2014/15 is a reflection of Lok Man Singh debacle.

Federalism has literally pulled the rug out of CIAA. It has recently established outreach offices, impacting so much on its budgets and staffing. Now this has to be realigned in line with provincial setups. There is a provision for establishing Provincial Investigation Bureaus (PIBs) under the new constitution. These bureaus are expected to handle corruption cases.

Similar to the conflict it had with the Special Police Department (SPD) in 1992, the CIAA might come headlong with these PIBs. The body is already glim faced after the curtailment of its power in the new constitution. The confusion over institutional roles and responsibilities at the local, provincial and national level is definitely going to dampen spirit of the CIAA.

It will also be interesting to note how we have come to the present day institutional arrangements for anticorruption agencies. In the past, corruption control was bifurcated into the palace with the power to investigate grand corruptions (via Royal Commission for Corruption Control) and the government investigating petty corruptions (via SPD).

It is yet to be seen how investigative power of CIAA will be shared between provincial and local governments in federal set up. Following the historical tradition, we may end up with the local and provincial bodies investigating petty corruptions and the CIAA investigating grand corruptions.

Thus there is a need to define petty corruption and grand corruption. In confusion over institutional roles and responsibilities of the two, there is a probability of corruption eating federalism than other way round.

KATHMANDU, June 3: Once hailed as a powerful constitutional body for acting tough on corruption charges, the Commission for the Investigation... Read More...

Kaushik Basu has proposed that the law be amended to reflect that giving bribe is legal but taking it is not Read More...