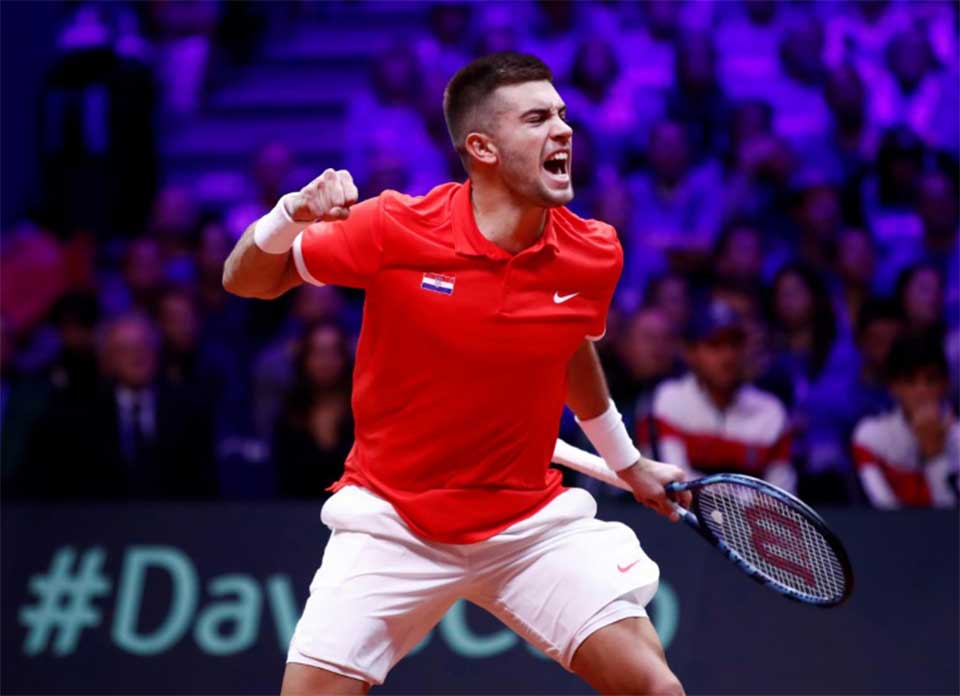 World number 12 Coric gave Croatia a flying start with an emphatic 6-2 7-5 6-4 win over an erratic Chardy and the 33-year-old Tsonga, out for most of the season after knee surgery, was then pummelled 6-3 7-5 6-4 by world number seven Cilic.

Chardy, ranked 40th, and Tsonga, now down at 259, were both trusted ahead of world number 32 Lucas Pouille.

Zeljko Krajan’s team need one of the three remaining rubbers to emulate their 2005 Davis Cup triumph while French hopes of extending the contest to Sunday rest with doubles pair Nicolas Mahut and Pierre-Hugues Herbert.

Noah has lost only one of 10 ties since returning for a third stint, against Croatia in the 2016 semi-final. The 58-year-old will step down after the final but his hopes of signing off with a fourth title as captain are in tatters.

No side has overturned a 2-0 deficit in a Davis Cup final since Australia beat the United States in 1939.

Nothing went right and even the choice of a clay surface looked suspect as Croatia’s players revelled on it.

At times, Noah could have been excused for disappearing behind the gigantic black curtain used to cut the 50,000-seater football stadium in half to create a stunning tennis amphitheatre.

“When you are close to winning, one or two points here and there, you can have a lot of frustration,” Noah told reporters.

“But today we were very far behind. They were superior to us. We never even saw the finish line.”

There has been an end-of-era feel during the build-up to the final — the last before the 118-year-old team competition gets a controversial makeover.

Whatever the future holds it did not detract from the electric atmosphere under the closed roof of a stadium hosting its third Davis Cup final in five years.

French fans are passionate about the Davis Cup and they cranked up the volume with their choreographed chanting throughout the afternoon’s action.

But it was the noisy block of Croatians perched in the chilly upper tiers who sung loudest.

Coric broke serve after an 11-minute opening game in which Chardy led 40-0 and won 15 points in a row on his way to taking the first set on the indoor claycourt.

Noah’s pep talks galvanized Chardy in the second set and his booming forehand finally gave him a toe-hold in the match.

But Coric was relentless and clinical. At 5-5 he forged three break points after some terrific scrambling and Chardy, who saved break points at 3-3, succumbed with a weak backhand.

Coric left the court for a medical timeout leading 4-3 with a break of serve in the third set but he showed no ill-effects from a hamstring twinge on his return and finished the job.

Cilic rammed home Croatia’s advantage with a performance of brute force against a willing but out-matched Tsonga.

No amount cajoling from Noah or the blue-clad fans could help former world number five Tsonga fend off the giant Croat.

Only briefly, when he had two points for a 5-3 led in the second set, did Tsonga threaten to make it a contest.

But Cilic snuffed out that danger and turned up the power on his forehand to break at 5-5 before holding for a two-set lead.

“If it goes to one set all it can be a very different story,” Cilic said. “Considering this is the final and it was against Joe it’s my best match for six month.”

To cap a depressing day for France, Tsonga appeared to twist awkwardly midway through the third set.

After disappearing for treatment he returned more in hope than expectation and Cilic duly sealed victory, bashing away a smash on match point.

Murray claws out victory to give Britain lead, Serbia win