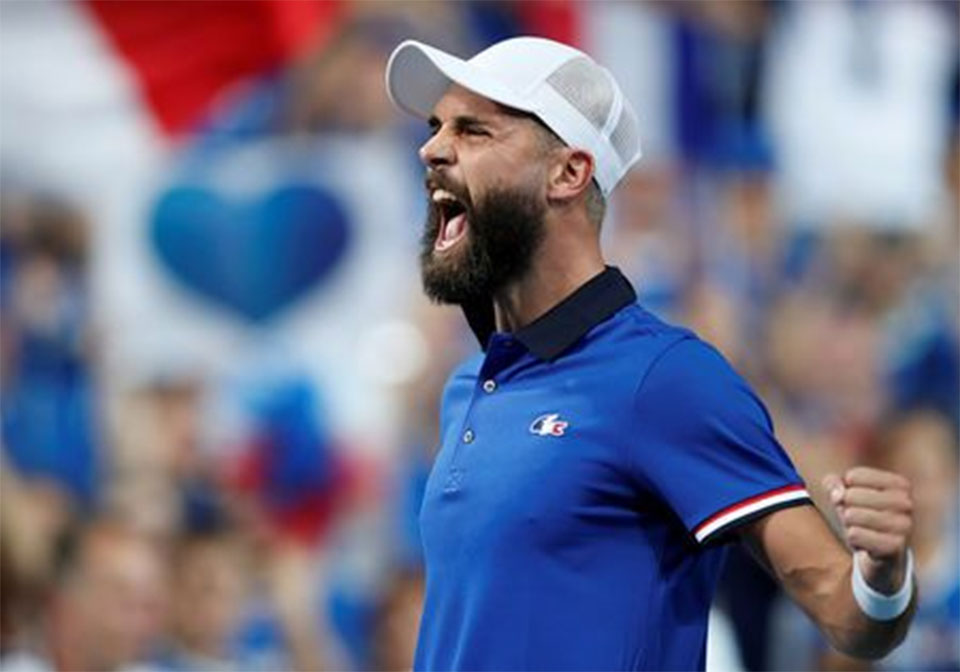 Paire made a remarkable Cup debut for France, outplaying an injured Pablo Carreno-Busta 7-5 6-1 6-0 in the opening rubber at the Stade Pierre-Mauroy.

After Paire had breezed to victory in less than two hours, French No.1 Pouille, back where he won the winning point for his country in last year’s final, battled from a set down to beat Roberto Bautista Agut in a classic five-setter 3-6 7-6(5) 6-4 2-6 6-4 in three hours 41 minutes.

The 2-0 lead for France means that the champions can book a place in back-to-back finals — and the last in the competition’s current traditional format — if Julien Benneteau and Nicolas Mahut prevail in Saturday’s battle of 30-somethings in the doubles with Feliciano Lopez and Marcel Granollers.

They seem on course for a rematch of football’s World Cup final with Croatia in November. The Croats lead the U.S. 2-0 in the other semi-final.

Paire had never been selected for his country in the ‘World Cup of tennis’ before, admitting himself that his explosive, erratic performances on court meant he could previously never properly be trusted.

Yet he has grown into a much more reliable and consistent performer in 2018 which prompted Noah to select him for his first tie at the unlikely age of 29.

“I’ve waited a long time for this and it’s a dream to win on my debut,” said Paire. “Though it’s been a long time, hopefully it’s not too late for me and I’ll get more chances.

Playing with real flair and looking as if he was made for Davis Cup theatrics, Paire also showed real heart when struggling in the first set as he three times had to battle back from a set point down.

Paire, the world number 54, started with predictable unpredictability, delivering nine double faults in the opening set but after saving the set points with steel, the bearded shotmaker was freed to play his most attractive tennis.

His ascent coincided with Carreno Busta’s struggles as the Spaniard, taking the team’s number one spot in the absence of the injured Rafael Nadal, was hit by a recurrence of the adductor problem that forced him to withdraw during a second round match at the U.S. Open.

From 3-5 down, Paire rallied to win the next nine games and, in total, 16 of the last 17 as his all-court attacking approach showed up Carreno Busta’s hampered movement.

“We knew there was some risk in playing but I felt really good yesterday and decided to play,” explained Carreno Busta. “But I felt it again and it was getting worse so that at 3-0, 4-0 in the second set I knew it was impossible to come back.”

Pouille was a set down and blew a 5-2 lead, with Bautista Agut saving five set points, but he came back from a mini-break down to win the tiebreak.

The Frenchman raced through the third set but though the more attacking player, he was far more erratic too. He mixed 52 winners and 87 unforced errors in contrast to Bautista Agut’s less spectacular solidity which dragged the pair into a decider.

Still, Pouille was rewarded for his boldness, earning the key break at 4-4 in the fifth.

Spain’s captain Sergi Bruguera admitted his Nadal-free team now face “the worst scenario” and he does not know yet if Carreno Busta will be fit for the reverse singles, which may see him have to turn to Albert Ramos Vinolas.

Kumari tradition from the rights perspective
14 hours ago