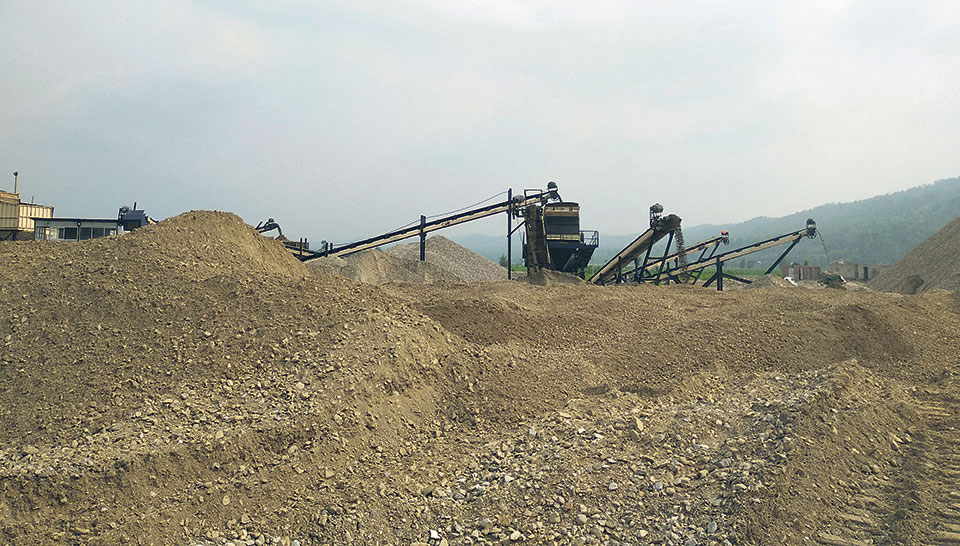 A crusher plant in operation in this file photo. Photo: Republica

Requesting anonymity, a local of Kushma said that the crusher plant operators are selling such aggregates to residents at cheaper rates. The locals are equally excited in buying quality aggregate to build their home at lower prices. “It is crystal clear that the crusher plants, in collusion with local body officials are selling construction materials meant for constructing national pride projects illegally to individual homeowners. And no one is taking action or concerned with such irregularities,” he fumed.

Construction of the 1879 km long Mid Hill Highway started a decade ago and is expected to complete by 2022. To expedite the construction of this project, the government has given various facilities to the contractor, which includes using locally available construction materials. When completed, the highway will be a double-lane blacktopped road from Chiyobhanjyang to Paanchthar to Jhulaghat of Baitadi.

Locals complained that the local authorities are not monitoring construction materials excavated from the river banks by crusher plants. Stating that the local bodies have been turning a blind eye to the haphazard excavation of sand and stones, they suspected collusion between them and the crusher plant operators.

Lama Construction Industries Private Limited has been operating in the Kushma area and has gained notoriety in the area for excavating stones and sand from the river day and night. Lama Construction has been tasked with the responsibility of constructing the Modi-Maldhunga section of the highway.

“We think that the company has collected more construction materials than it would require to construct that road stretch. We live here, and we are witness to what they are doing here. However, it is sad to see that local bodies have been mum while the company is excavating our river banks unabated,” said a woman from Kushma. “Even though we have raised concerns against the haphazard excavation of our resources from the river, the local bodies has turned deaf to our pleas,” she added.

Residents accuse the authorities at the local and district level of conspiring with the company. District Development Committee, District Administration Office, Kushma Municipality and the office of the Mid-Hill Highway – ‘all have been colluding the company in the illegal excavation of resources from the river, they state.

Residents said that they are mostly concerned about the environmental impacts of such haphazard mining. Excessive and unregulated mining of sand and stones from the river bed and banks can alter the course of the river, leading to disasters in the area, they claimed. They said while they are grappling with the impacts of unregulated construction of roads in towns and villages, excavation of resources from the river is adding to their concerns.  “We don’t feel good when in the name of development, they disturb the local ecosystem. In the name of development, they are exploiting natural resources from the river. They are excavating stones and sand from the river and selling it illegally,” said an elderly man Shiva Baniya of Kushma. He added that the entire Tarai region is already struggling to face the impact of climate change and the destruction of the Chure range.

Three registered crusher plants are presently operating in Parbat district. All these plants are working to provide construction materials for the government’s development projects. They are responsible to avail the required stones and sand for government-funded roads or other infrastructures under construction in the district.

“But they are openly selling the construction material to domestic and private sector builders,” said Baniya. “The state is mum over such a grave issue,” he added.

According to Ashish Thapa Magar, Chief of the Mid-Hill Highway Project, there might have been some confusion over the letter of permission. The crusher plants have acquired a letter of authorization to collect construction materials from several authorities.

Lama Construction, for instance, has letters with it signed separately by Vice Chairperson of Kusham Municipality Sita Kafle and Chief Administrative Officer of the Municipality Subash Kumar Lamichhane and Chief District Officer (CDO) Gurudutta Dhakal. They have given the construction company authority to collect construction materials from different areas.

Under the new structure of the country, the overlapping of authority has become a problem. The lack of clarity in the power of local, provincial and central bodies has marred the development process across the country. At some places, it has resulted to even court cases.

According to CDO Dhakal, he will probe the matter. If there has been an illegal transaction of river mines, that will be corrected, he said. “We are not going to tolerate such wrong activities if such things have happened, we are going to book the culprits,” he stated.

PARBAT, July 17: The Parbat-Baglung section of the Mid-hill Highway has been obstructed due to landslides triggered by continuous rainfall.... Read More...

The death toll of Parbat bus mishap has climbed to seven. ... Read More...