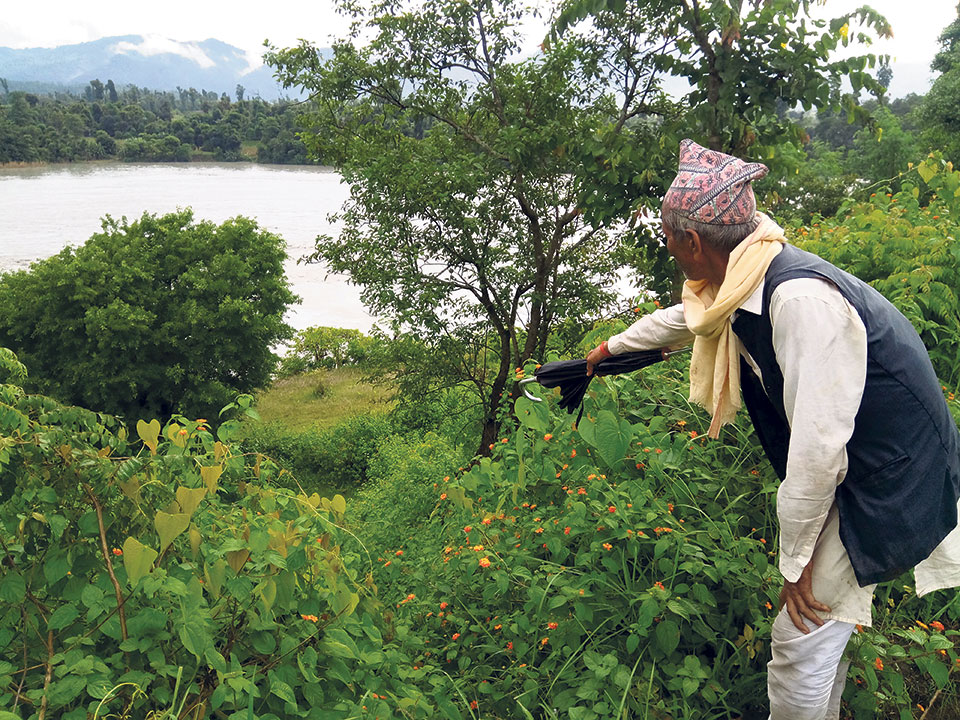 A local of Lekbesi Municipality-1 shows areas that will be inundated once the Chiple dam is constructed, in this recent photo. Photo: Nagendra Upadhyay/Republica

SURKHET, June 19: The Bheri Babai Diversion Multipurpose Project (BBDMP) has completed preparations to distribute compensation to residents for the land it acquired. The project aims to irrigate 510000 hectors of agricultural land in Banke and Bardiya district and generate 46 megawatt of electricity upon completion. Project officials said that it is a great progress for the project, which is expected to complete by 2022.

"The compensation distribution process will start within this fiscal year. We have made all the necessary preparations and are actively coordinating with the District Administration Office (DAO)," said Shreeprasad Shah, a civil engineer with the project. "Since we have made all the preparations, we expect to make the distribution process fast and hassle free. We expect to hand over the compensation to them within weeks of starting the process," he added.

According to Shah, the final survey of the locations has been completed and the report will be handed over to the CDO in a week. As per the survey, 13 hectors of registered land and eight hector of public land is likely to get inundated due to the project. A total of 11 houses of locals could be affected.

A survey done five years ago had shown that only eight hectors land could be affected. "The final survey has come up with utmost accuracy," said Shah.

One of the major components of the project, tunnel construction was completed in April this year. A special boring machine was used for the drilling the 12,210 meter tunnel which begun in October 2016.

"The most challenging part of the project, the tunnel has been completed. Now we are focusing on completing the remaining components of the project including the construction of the barrage, among others," said Shah.

The issue of compensation has been a headache for the government in almost all of its big development projects. Inability to settle compensation rates with the locals has often resulted in delays and in some cases have been suspended. For instance, the mega industrial park project in Jhapa is facing compensation issues as locals have warned of protests.

"Compensation part is always very sensitive, as we aim to complete the project on time, it is very important to settle the issue with locals timely," noted Shah. "Now the compensation process has started after two months of the completion of the construction of tunnel," he added.

The project has allocated Rs 100 million for the compensation this fiscal year only. Next fiscal year, which starts in month, other budget will be managed, according to Shah.

He stated that the rate would be fixed reasonably. Government rate of the land, current rate of transaction, quality of infrastructure and so on would be considered to fix it. "Only after the rate of the land fixed, construction of the dam will begin. It is very important to keep in mind that locals be least affected," Shah said.

For the dam construction, tender process has begun. The department of irrigation called for tender recently. "Locals are positive. We are going to distribute compensation before finalizing the tender," Shah stated.

Gehendra Pandey of Lekbeshi Municipality – 1 is one of the victims who will lose house and one bigha of land to the project. He stated that he is hopeful of the government doing justice to him and everyone like him. "We have been told that we would be given due amount for our house and land. We are hopeful, let's see," he said.

Locals like him whose land and houses are going to be covered by the project are bit assured following the new survey. Earlier, they had reservations. "In the earlier survey, they had missed out many places, now this new survey is good we heard," he said. He however added that the locals will definitely protest if in case the government fails to fix price as per current transaction rate.

KATHMANDU, July 25: The Foreign Employment Promotion Board (FEPB) has distributed Rs 484.94 million in compensation to the families of 753... Read More...

KATHMANDU, July 11: The government has decided to provide Rs one million to the family of Saroj Narayan Singh who... Read More...

KATHMANDU, Feb 8: The government has decided to provide up to 75 percent compensation for acquiring land needed for the... Read More...