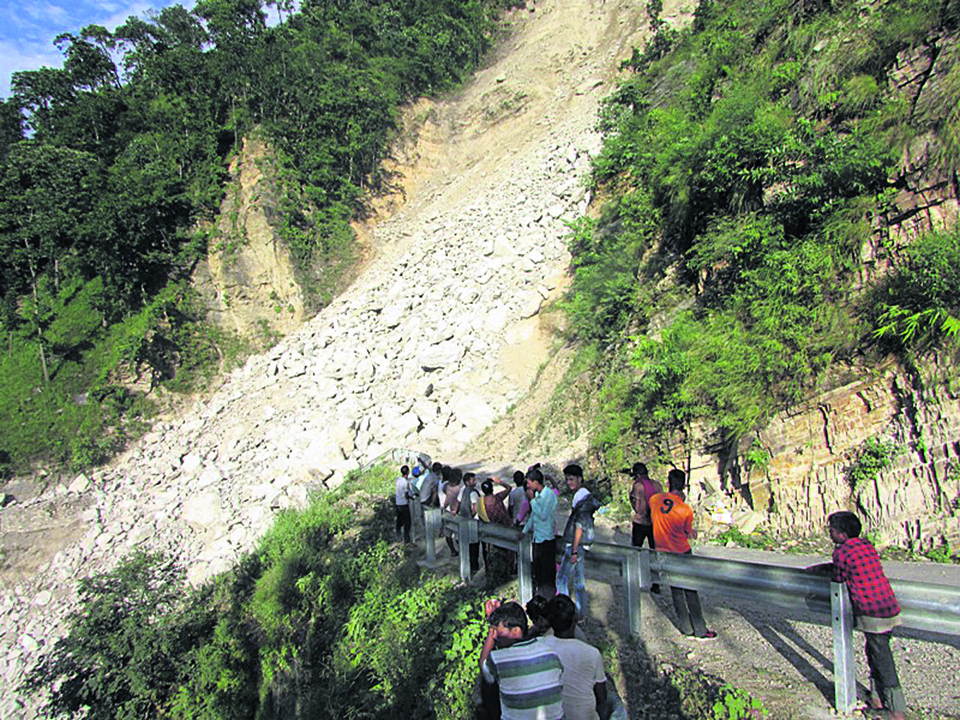 Db Budha/Republica A section of the Karnali Highway obstructed by landslides.

JUMLA, September 3: Nar Bahadur Gharti, who was traveling from Nepalgunj on a motorcycle, returned without reaching his destination in Jumla district. He could not move ahead towards his destination due to the massive dry landslide in Dahikhola area of the Karnali Highway's Kalikot section.

“Dry landslides are occurring very frequently along the highway. I abandoned my travel and returned to Nepalgunj after I lost the hope that the obstruction would be cleared,” said Gharti. He is now preparing to fly to Jumla after the destination became inaccessible by road.

Another traveler, Bishnu Budha of Tila Rural Municipality, was also forced to return to Nepalgunj recently. He also cited the perilous journey through the highway as the main reason. “There is no way to travel through Karnali other than by risking our lives. It feels much safer to travel through airways,” he said.

People like Gharti and Budha are just a few examples. They represent the plight of hundreds of commuters who are unable to travel through the highway.

The Dahikhola section of Karnali Highway is full of risks. The road section has remained obstructed for a very long time. Yet, the debris hgasn't been cleared, forcing commuters to undertake highly perilous journeys.

It has already been 10 years since the highway came into operation. Unfortunately, till now, travelers are not able to feel safe while commuting on it. Over half a dozen people have already lost their lives so far in the Dahikhola section alone.

A common complaint from the locals of Karnali is that the government is not serious about upgradation of the highway to minimize the losses of lives and properties. “Despite the pitiful situation of the commuters on the highway, the government authorities concerned are not bothered,” said Rati Rokaya, a local.

Passengers think the highway will not re-open before a week. “Perhaps the government entertains from our plight,” Rokaya rued.

Of late, there have been lots of incidents of dry landslides on the highway. Normally the highway would have landslides only after incessant rainfalls. The highway has already earned a nickname of 'Highway of Death' due to high number of road accidents and human casualties.

DAILEKH, June 14: At least 11 passengers have died in a bus accident in Karnali highway near Nayan Mandir of... Read More...

KALIKOT, Aug 8: A massive landslide that occurred near Manma, the district headquarters of Kalikot, has brought transportation along the Karnali... Read More...