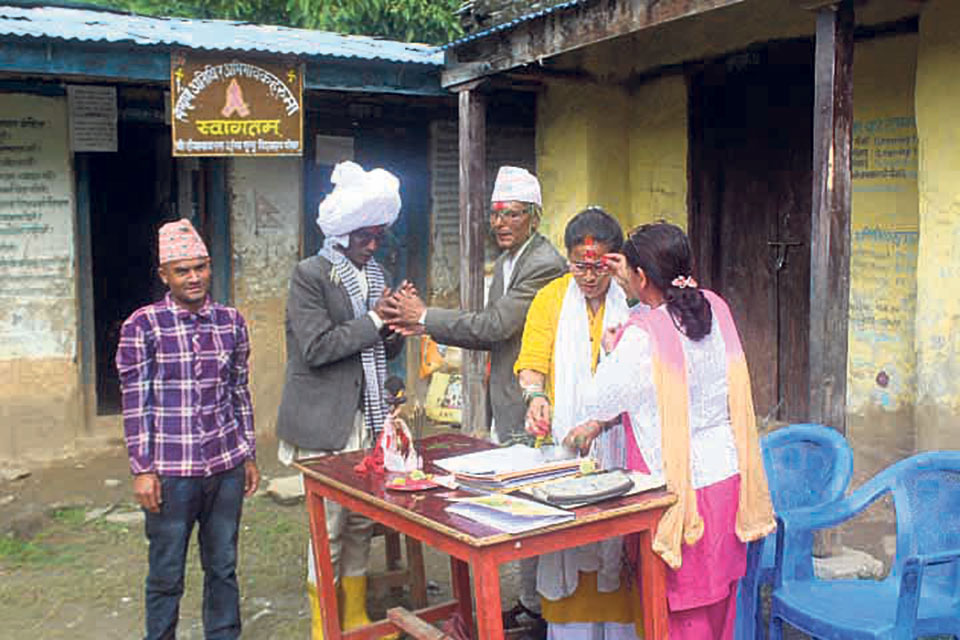 Officials of Pashupati Basic School felicitated a local on the school’s premises in this recent picture. Photo: Suman Malla/Republica

MUGU, Aug 8: A community school in Mugu exclusively run by female teachers has set an example. Pashupati Basic School located in Chhayanath Rara Municipality did not perform well in the past. However, recently, it has progressed dramatically. So much so that it has started attracting students from the nearby private schools. Teachers and parents attribute it to impressive academic results and co-curricular activities. And the school has done this despite its limited resources.

“Our administration has made best use of the resources to position it as a model school. Toilets, drinking water, playground, classrooms have been improved,” said the school’s Principal, Chetna Shahi. “We took it as a challenge to improve the school’s status.”

There are a total of 138 community schools in the district. Except for a handful, many of these schools are struggling for existence. Private schools attract students for many reasons, but their main selling point is teaching in English. According to the principal Shahi, her school has been instructing students in both English and Nepali mediums. “The biggest hurdle for community schools is the lack of resources. However, we want to make learning fun in every possible way with our limited resources,” she said.

The school established in 1990 at Ima village of the municipality has only four classrooms. Earlier, we had only two rooms, and there was no fence around the school premises. Nowadays we have not only fence but also a small garden where the children learn to grow flowers, fruits and vegetables. Apart from that we also have a playground.

“Our priority is academics. But to make children familiar with practical life, we take them to the garden. They learn everything with fun,” said the principal Shahi.

Another attraction for children is the resumption of mid-day meals. This has been a great relief for kids from a financially poor family.

Mid-day meals were common in community schools earlier. Later it was halted citing irregularities and substandard quality of the food. Reports had warned of high dropout rates if midday meals were discontinued. Records later proved it right. However, only a few schools have resumed the facility.

“In rural villages, mid-day meal played a vital role in bringing children to school. Or else, many would not take an interest in coming to the school,” noted Shahi. “Here too, we thought a lot about mid-day meal, and we decided to resume it. It is paying off. Students come to school regularly.”

The beautiful part is that the school tries its best to offer mostly organic food. Instead of buying things from the market, the school sources locally grown carrots, tomatoes, potatoes, green leaves and similarly maize.

“We have taken some plots on lease where we grow vegetables and maize. We are trying to feed organic food to children,” said Shahi. “Our school has some garden where we also have vegetables and fruits. We hardly buy things from the market except for some crops,” she added.

The school resumed mid-day meal with the support of ‘Nari Utthan Sachetana Kendra’. The non-profit has been encouraging schools and households to switch to organic products.

“Locals productions are fast becoming rarer. Everything is brought from elsewhere. There is a need to make parents and children aware of the importance of fresh and local food,” said Shahi. “We are working in that direction too.”

There are 70 students in the school which runs classes up to fifth grade. Last year, there were only 40 students.

A local of Ima village Ram Bahadur Khadka had donated land for the school back. Initially, it used to run classes for children up to third grade. In 2010, the school’s alls staffs were female.

According to Nara Bahadur Rawal, chairperson of ward number three of the municipality, the school’s quality never deteriorated after it went in the hands of female teachers. “There are many community schools which collapsed over the years in lack of resources and proper management. Here, the teachers have been working well since around a decade,” he said. “The female teachers have put in good efforts. It seems, it has paid off,” he added.

Seeing the enthusiasm of the school team, local administration is considering further extending financial support for improving the school’s infrastructure. According to Rawal, Rs 1.6 million has already been handed over to the school with which it constructed two new classrooms.

“This school means a lot for poor communities in this locality. And the good progress it has shown of late has drawn the attention of everyone around. The local administration will continue to support it in the days to come,” stated Rawal.

PARBAT, April 22: Community school teachers are accused of admitting their children in private schools despite themselves being associated with... Read More...