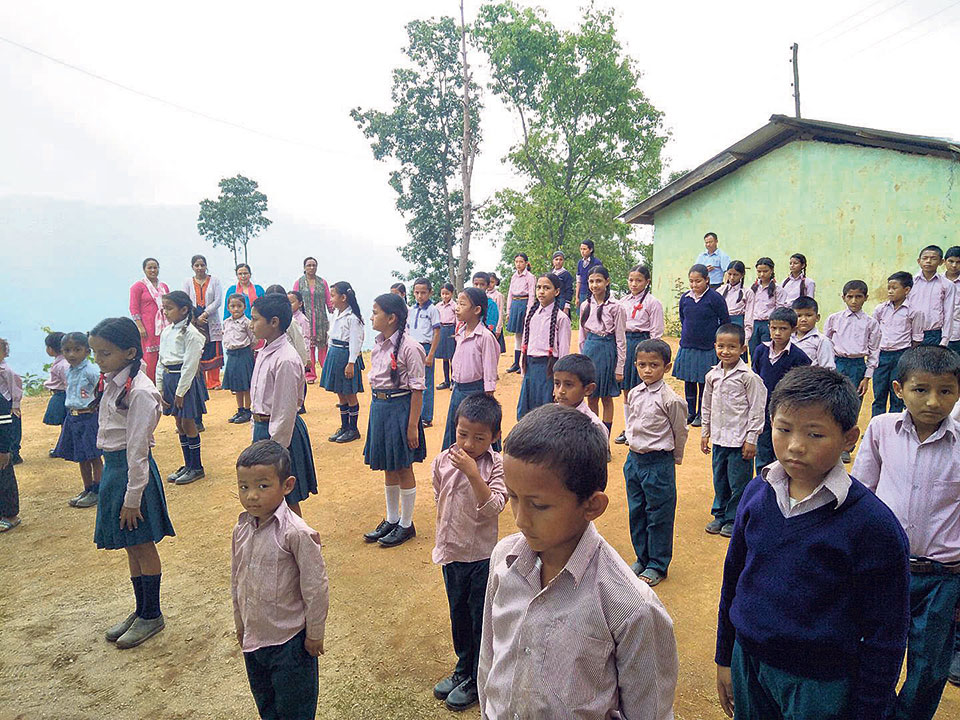 ILAM, June 25: Until a decade ago, it would be a taxing job to find a community school that would instruct students in English. As students were gradually switching to private schools to study in English, community schools came under pressure to respond to the demand.

Consequently, a growing number of community schools adopted English as the medium of teaching. This trend became even more popular after the local bodies came into existence.

Deumai Municipality of Ilam made it mandatory for community schools to conduct teaching-learning activities in English. Subsequently, 22 out of the 50 community schools in the municipality adopted English as the medium of teaching. However, coming now, these schools are not comfortable with the adoption.

“The compulsion to teach in English medium has brought more difficulties for these schools. Both the students and teachers are finding it difficult to communicate properly in English,” said Rupendra Neupane, chief of the municipality’s education department. “Students learned English a bit, but in doing so, they are deprived of knowledge about our society, culture, practices.”

The problem primarily lies in the inefficiency of the teachers. According to Neupane, very few teachers associated with community schools have good command in English. “Let’s say a handful of teachers might have the capability of speaking and writing correct English. So how are other teachers teaching their students?”

The municipality hired an additional 30 teachers for these schools after considering this scenario. By doing so, the municipality expected that the community schools would be able to fill in the lack of teachers proficient in English.

“However, that did not happen. Teachers themselves feel like climbing uphill while teaching in English. When teachers are having a hard time understanding English, you can imagine the situation of their students.”

Neupane further added that the impact of using English as a medium of teaching in school has been severe. It is not just about the discomfort the teachers and students are facing, but it’s about how much the students are learning.

“When both teachers and students are not proficient in English and yet teaching and learning in English, both sides cannot perform well. The teachers cannot express themselves fully while communicating ideas to students, and the students cannot understand their teachers fully. This is hampering the performance of the students in subjects like mathematics, sciences, and social studies,” said Neupane. “Results so far show that students have fared very poorly in all major subjects,” he said.

He added that students performance in subjects like mathematics, science, social studies, among others, have been very poor. Along with that, students have lost interest to learn Sanskrit, social values, and norms, he claimed.

Poorly delivered classes in English medium is slowly taking a toll on the thinking pattern, ideas, behavior of children in the rural areas and towns, according to Neupane. But neither the authorities, nor parents have thought of the consequences. “Community schools adopted English as a medium of teaching to survive. Parents want it, everyone wants it,” said Neupane. “But we are yet to realize what we are losing in this process,” he added.

Parents, on their end, defend their choice, saying that they too don’t have an option. Kamala Thulung, the chairperson of Bhadrapur Municipality – 3, said that her sister had a very tough time getting admission into a nursing course because she was not schooled in an English medium school.

“We know that English is not everything, but my sister had to face too much hassle in getting admission in a nursing college as she was not from an English medium school,” Thulung said. “And because I saw that, I am doing everything I can to make sure that my 5-year-old daughter is good in English. I send her to a school where they teach in English,” she added.

After she became the chairperson of the ward, Thulung was asked by locals whether she would take initiatives to establish English as the medium of communication in community schools. Only after that, was she asked about her plans for transportation and other facilities in the ward.

In the present context, it is not practical or possible to ignore English, according to Thulung. However, it is very challenging to conserve our culture as well as learn the global language and culture, she noted. “There is a need to provide quality education without losing our originality; that is the challenge before us. We have to be very sensible and resourceful to succeed,” she said.

According to a community school teacher of Panchthar district, Laxmi Bhandari, community schools in every district, that have implemented English as the medium of teaching are struggling.  “In our school, we have been teaching in both English and Nepali medium. But teaching and learning in English, when you are not comfortable using the language, is not good,” she said.

PARBAT, April 22: Community school teachers are accused of admitting their children in private schools despite themselves being associated with... Read More...