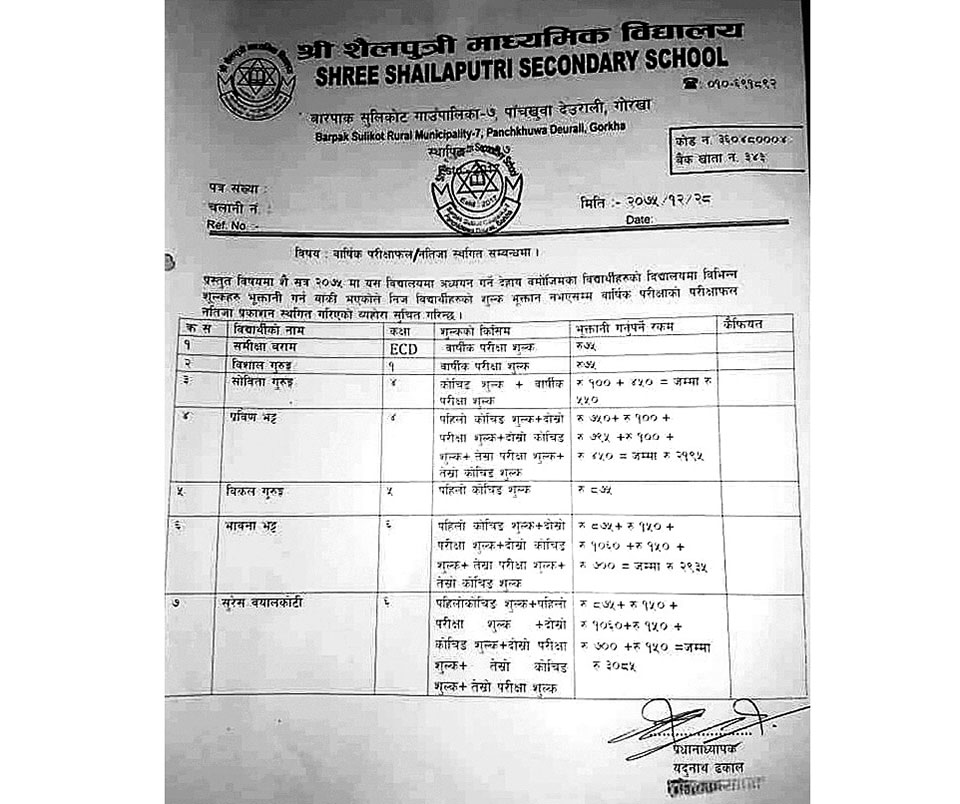 GORKHA, April 14: Although article 31 of Nepal’s constitution states that every citizen shall have the right to get free education up to the secondary level, community schools in Gorkha are charging fees for students studying in basic to secondary levels.

Three years after the promulgation of the new constitution, charging fees as a part of tuition and exam fees at basic to secondary levels is rampantly practiced in many schools in the district. Shree Shailaputri Secondary School of Barpak, Sulikot-7 recently barred seven students of the school from collecting their exam results as they were unable to pay school fees.

Principal of the school, Yadunath Dhakal, had published a written notice disclosing the names, grade and fee amount of the seven students.

The students came to know about it through the notice published by the school.

Samichha Baram of Early Childhood Development (ECD) and Bishal Gurung of Grade 1 could not collect their results as they failed to pay their exam fees.

Likewise, Prabin Bhatta of Grade 4 faced the same fate due to his parent’s inability to pay a tuition fee of Rs 2,195. His classmate Sabita Gurung was denied the result after she failed to pay Rs 550 as tuition and exam fees.

Bikal Gurung of Grade 5, Bhawana Bhatta of Grade 6 and Suresh Bayalkoti of Grade 7 were the other students deprived of the exam results.

A number of locals meanwhile criticized the school management and the principal for such act.
“What could be more miserable for students having to face such humiliating moment due to financial problem,” a local Hari Dhital wrote on social media.

Another local, Kiran Baram informed that most of the students who generally fail to pay fees are from poor financial background.

Although the constitution of 2015 guarantees the right to free education to the students, schools in many areas across the country have been charging fees to the students who mostly belong to families with poor economic condition.

The government is planning to double existing number of judges in Nepal’s courts by amending the constitution. Does it... Read More...