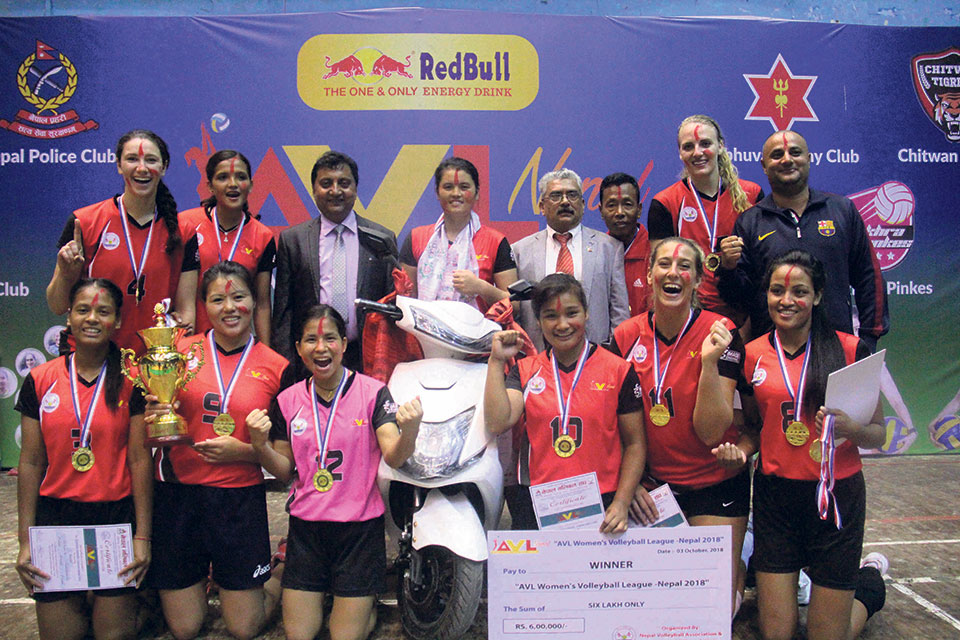 Players and members of Chitwan Tigers pose with the trophy after defeating Armed Police Force Club during the final of the Aadhi-Aabadhi Women’s Volleyball Tournament at the National Sports Council’s covered hall in Kathmandu on Wednesday. Photo Courtesy: NSC

In the final match played at the National Sports Council (NSC)’s Covered Hall, at Tripureshwar, the winning Chitwan team that had three American players and an American coach, kept APF under pressure throughout the match. Chitwan Tigers found it hard to beat APF in the first set 25-20, but played brilliantly in the latter two sets winning them 25-17, 25-11 respectively.

Chitwan’s setter Aruna Shahi, who was adjudged as the best player of the tournament, won a scooter along with a purse of Rs 50,000. Shahi, who usually plays as a spiker from Western Region, proved that she can also play as a setter.

CHITWAN, Oct 2: A person died when he was knocked by a truck at Tandi Chowk of eastern Chitwan last... Read More...

Hours after their first formal dialogue, government and Chand-led CPN hold second round of talks
20 hours ago

'When will it end?': How a changing virus is reshaping scientists’ views on COVID-19
5 hours ago