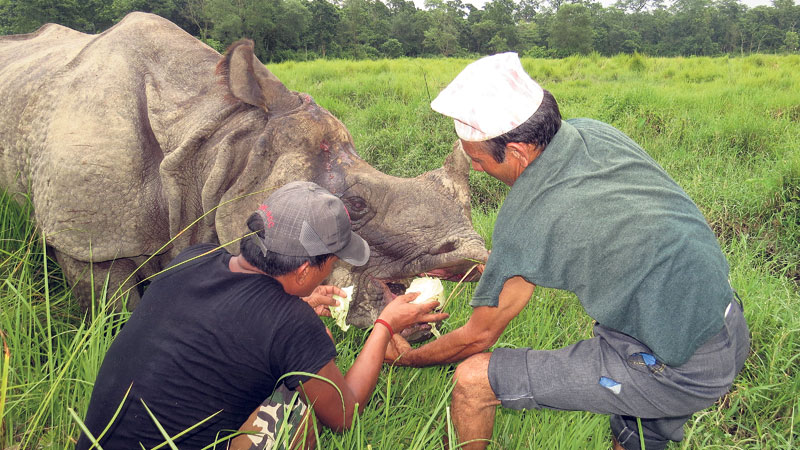 CHITWAN, Aug 24: Shiva Prasad Rimal was looking quite emotional on Wednesday morning while he was feeding a giant wild animal. There was no trace of fear in his face; neither was he in hurry to get the job done.

“It might have pained him a lot. There were six bullets in this rhino’s body,” he said while tending the rhino at the Chitwan National Park.

Shiva Prasad is an animal caretaker at the park. Helping him to feed the injured rhino was Tika Ram Tharu, another staff at the park. “It is not a joke to stay near or deal with rhino. However, he’s injured and we have to take good care of him,” Tharu said. He added that emotional bonding with animals, though they are wild, is natural for the national park’s staff as they spend days and nights in jungle, too.

The rhino was found with six bullet injuries in a jungle near the Chure in Rautahat district on Saturday. The incident had widely drawn headlines and huge number of sympathizers from in and outside the country. Lying helpless at the Tileshwor Community Forest of Chandrapur municipality - 2, Gaindatar, the rhino was first spotted by Gaindatar locals who had been in the area for cutting grass. Police and forest guards had rushed to the site after the villagers informed of the rhino’s condition to them. Thereafter the rhino was taken to Sauraha for treatment.

“It was in a very pitiful condition when we brought it here. We were touched by its struggle to survive,” Rimal said. “But in the recent days it is showing good signs of recovery. We are hopeful it will get well soon and return to its habitat,” he added while feeding apple and vegetables to their special patient.

Tharu and Rimal are part of a group that has been providing medical care to the rhino. Each member of the group has been tending with full devotion and because of this devotion even a small gesture or improvement shown by it becomes a topic of intense discussion in the group.

“On the first day it came here, it did not like to eat anything. We tried a lot to feed it but showed no interest,” Rimal reported. “Now it does not stop from asking more and more,” he added quite excitedly.  “And you can see that it has started to walk around. The day it was brought here, it was looking quite feeble and helpless. It has been recovering very fast.”

The speedy recovery has been made possible by the extra care provided by the members of the group attending the rhino. They have been providing care to it in turns, day and night. Along with them, a team of Nepal Army has been providing security to the beast, day and night. The army has erected tent near the rhino living space to ensure that the rhino recovers in a safe environment. “We are providing apple, banana, cabbage and other fruits and vegetables to the rhino in a two to three hours gap,” said Tejan Lamichhane, officer at the national park.

Generally whenever bigger animals like the rhino are injured they recover very slowly. However, this one has been recovering very fast, Lamichhane said. The rhino has sustained bullet injuries nears its right eye, neck, forehead and on the backside. Analyzing the multiple bullet shots, park officials claim that the rhino was targeted by amateur poachers.

“Bullet injuries sustained by the rhino reflect that it was targeted by amateurs but that they were not able to bring it down. We are investigating the case,” said Narendra Aryal, assistant conservation officer at the park. “It was badly injured and since we came to know about it, we have put our best efforts to save it and we continue to give it our best to recover soon.”

After being brought to Chitwan National Park the rhino was administered six packs of saline water and was kept on drip till it was able to eat.

“As soon as it started taking food, we started feeding it. And it gradually started to recover,” said Rimal. Senior veterinary doctors at the park, Kamal Gaire, Purushhotam Panday and Amir Sadaula are jointly providing treatment to the rhino. They have been providing all types of medical care to the animal. “Along with administering drugs necessary for its wound to recover we have been applying medicine on its wound to keep the germs away,” Garie said.

Basu Dhungana, president of Mrigna Kunja Buffer Zone Consumers’ group stated that the rhino is getting no less care than a pampered child of a loving family. “He is being treated as one would treat their children. Everyone is emotionally involved and that’s why, it is really improving,” Dhungana said.

“Nepal has celebrated zero poaching years of rhino for year after year. We had been able to deliver a positive message to the world. But this incident has quite saddened us,” he added. 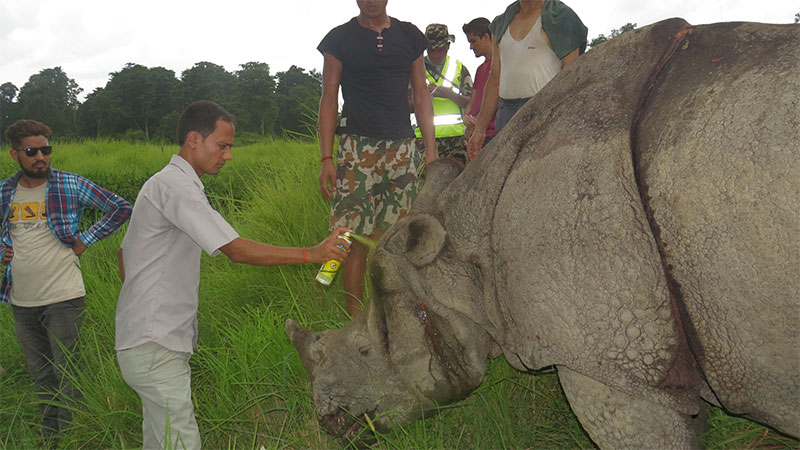 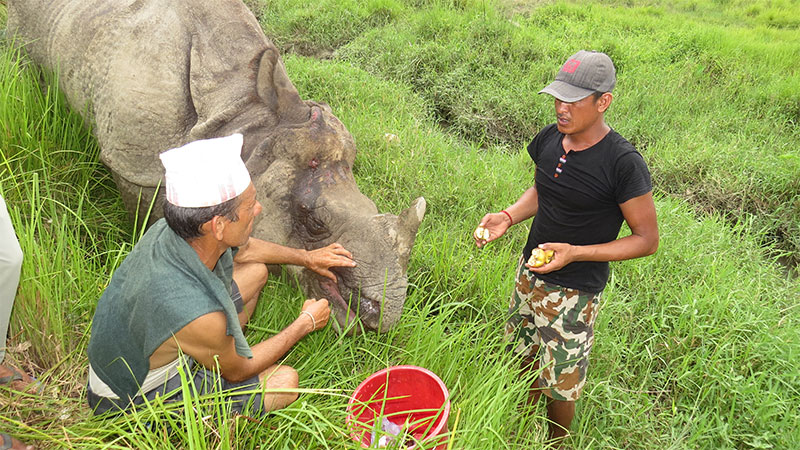 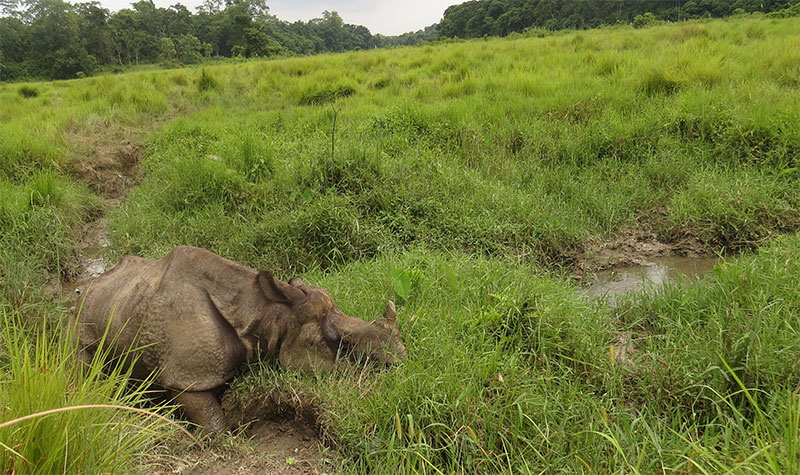 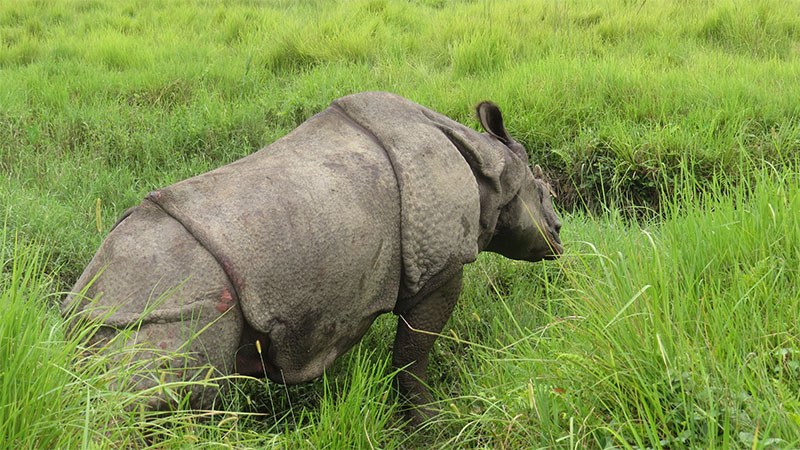 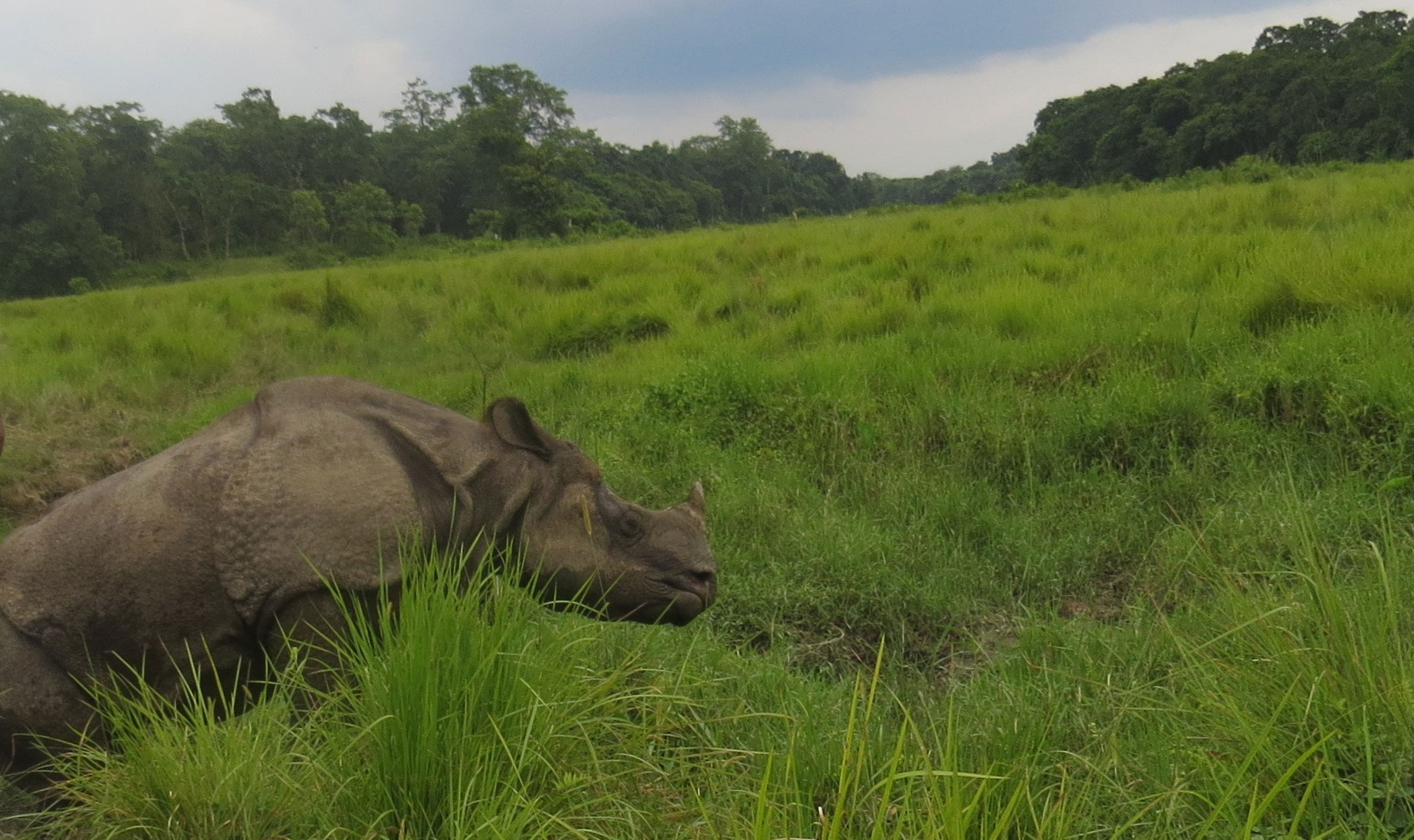 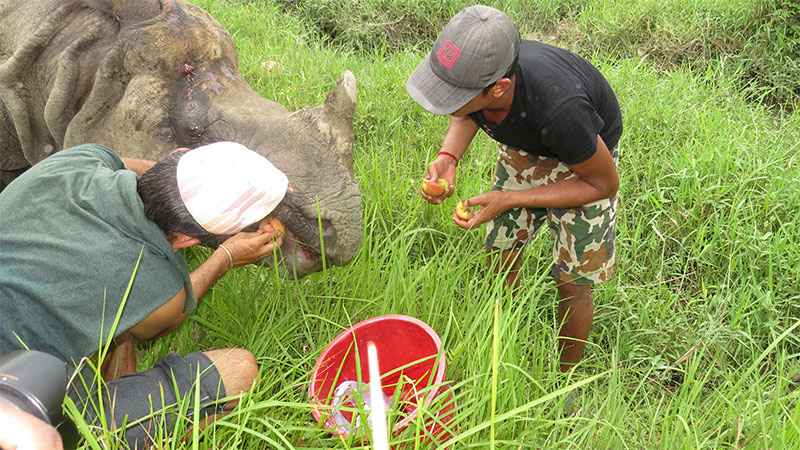 CHITWAN, Jan 7: A rhino horn was found inside the Chitwan National Park. The horn of an adult rhino was... Read More...

Rhino claims one in Chitwan

Govt has not barred BFIs from accepting land as collateral: Minister Shrestha
17 hours ago
Stockbrokers permitted to operate their own TMS for online trading of shares
2 hours ago