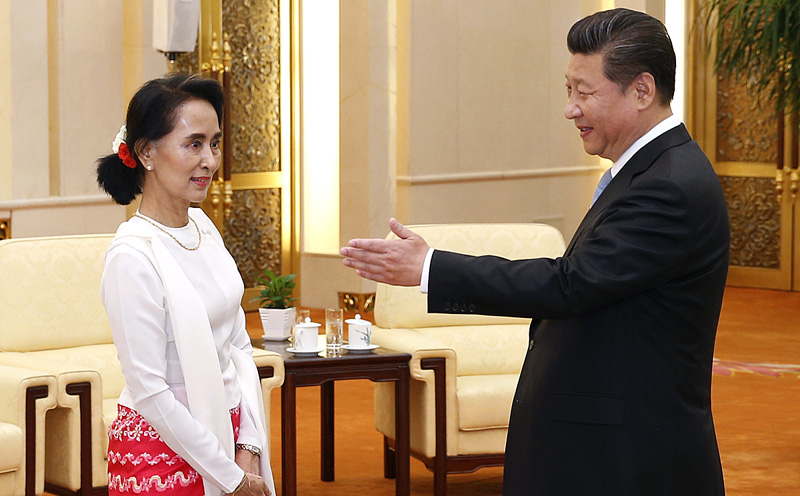 With Suu Kyi committed to a neutral foreign policy, China’s days of sucking resources from Myanmar are over
China is a big fan of dams. Indeed, over the last 50 years, the country has constructed more dams than all other countries combined. But there is one dam that China never managed to get built: the Myitsone Dam in Myanmar. And Chinese leaders can’t seem to let it go.

The Myitsone Dam was to stand at the headwaters of the Irrawaddy River, Myanmar’s lifeline. It was designed as a hydroelectric power project, which would generate energy for export to China, at a time when Myanmar’s economy depended on its giant neighbor.

Where others saw human-rights violations, China saw an opportunity to advance its own strategic and resource interests. When the Myitsone Dam project was introduced, China was also establishing a foothold in Myanmar’s Kyaukpyu port on the Bay of Bengal, from which it would build energy pipelines to southern China.

A stronger presence in Myanmar’s Irrawaddy, which flows from near the Chinese border to the Andaman Sea, promised to provide China with a shorter, cheaper trade route to Europe. As an added benefit, the Myitsone project—and, more broadly, China’s relationship with Myanmar—would advance China’s ambition of challenging India’s advantage around the Indian Ocean.

Everything seemed to be going according to plan. But in 2011, just two years after the US $3.6 billion project got underway, Myanmar’s government suddenly suspended the dam’s construction—a slap in the face to China. Moving toward democratic reform, President Thein Sein’s government was eager to cast off the view of Myanmar as a Chinese client state.

Sein got what he wanted. Myanmar’s reversal on the Myitsone Dam became a watershed moment for the country’s democratic transition. It helped to bring an end to Myanmar’s international isolation, and an easing of the long-standing Western sanctions that made Myanmar so dependent on China in the first place. In 2012, Barack Obama became the first US president ever to visit Myanmar.

Last year, Myanmar elected its first civilian-led government. The National League for Democracy, led by the former political prisoner Aung San Suu Kyi, won the election in a landslide. Though Suu Kyi was blocked from running for the presidency directly, she is the most powerful figure in Myanmar’s ten-month-old government.

Alongside all of this democratic progress, however, Myanmar’s relations with China cooled considerably. After work on the Myitsone Dam halted, several other dam and energy projects were also put on hold, though Chinese firms did manage to complete multibillion-dollar oil and gas pipelines from Myanmar’s western coast to southern China in 2013-2014.

But China has not given up on the Myitsone project. Indeed, President Xi Jinping seems to be trying to seize the opening created by Suu Kyi’s efforts to defuse bilateral tensions—her first diplomatic trip since the election was to Beijing—to pressure her to reverse Sein’s decision.

China has warned that if Myanmar fails to resume the Myitsone project, it will be liable to pay $800 million to China. Hong Liang, China’s ambassador to Myanmar, declared three months ago that Myanmar should be paying $50 million in interest alone for each year the project is suspended. But if the project were completed, Hong continued, Myanmar could reap high returns by exporting much of the electricity to China.

The threats have not fallen on deaf ears. Before her visit to Beijing, Suu Kyi tasked a 20-member commission to review proposed and existing hydropower projects along the Irawaddy, including the suspended Myitsone deal.

But Suu Kyi, who disparaged the dam project when she led the opposition to the junta, remains unlikely to restart the Myitsone project. As much as she wants China off her back—an objective that surely drove the decision to launch the commission—actually agreeing to resume work on the deeply unpopular Myitsone Dam would be too politically compromising to consider.

In fact, within Myanmar, the Myitsone project is widely regarded as a yet another neo-colonial policy, designed to expand China’s influence over smaller countries, while feeding its own resource greed, regardless of local conditions or needs. And there is plenty of evidence to support this reading—beginning with China’s demand for most of the electricity, even as much of Myanmar suffers from long daily power outages.

Moreover, the construction that did take place had serious consequences for the people of Myanmar. By flooding a large swath of land, the project displaced many subsistence farmers and fishermen, fueling a popular backlash that contributed to the end of a 17-year ceasefire between the Kachin Independence Army and government forces. (Ironically, as part of its effort to get Suu Kyi on their side, the Chinese are now seeking to mediate peace talks between the government and the rebels, who, it has long been believed, receive arms from China.)

Chinese pressure to restart the Myitsone project is reviving anti-Chinese sentiment in Myanmar. Indeed, while Suu Kyi was in Beijing, anti-Chinese protests flared anew back home. At a time when Myanmar is being wooed by all major powers and eager international investors, there is no incentive for the government—much less the public—to ignore the environmental and human costs of China’s projects.

It is time for China to recognize that the decision to end the Myitsone project will not be reversed. It can hope that Suu Kyi’s commission makes some face-saving recommendations, such as paying compensation to China or making new deals for smaller, more environmentally friendly power plants. But, with Suu Kyi committed to a neutral foreign policy, China’s days of sucking resources from Myanmar, without any regard for the environmental or human costs, are over.

THE HAGUE, Netherlands, July 12: An international tribunal ruled unanimously Tuesday that there is no legal basis for China's "nine-dash... Read More...

What’s the matter with China?
23 hours ago

IN PICS: Youths seek justice for 12-year-old girl killed after rape
36 minutes ago