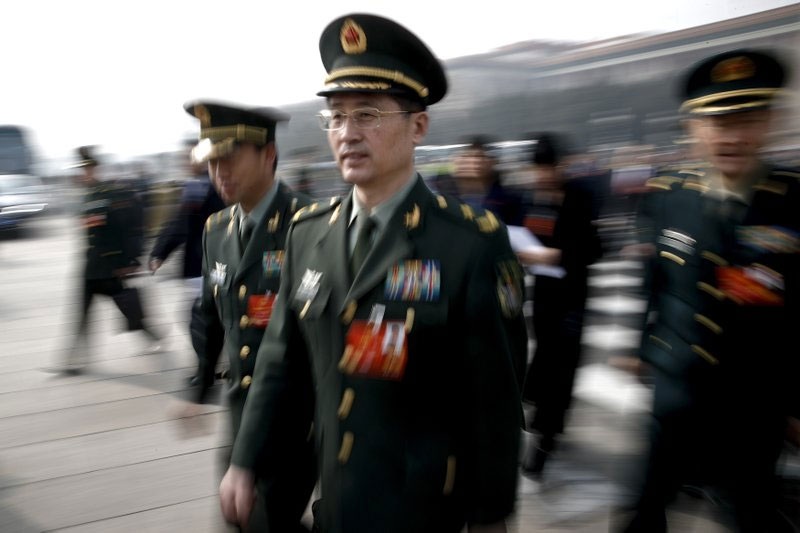 The move is part of a sweeping government reorganization aiming to boost the authority of the ruling Communist Party headed by Xi, who has firmly established himself as China’s most formidable leader since Mao Zedong, the founder of the communist state.

That has dismayed critics who fear a return to one-man rule and the destruction of modest measures to institutionalize and constrain power in China, such as the 1982 constitution’s setting of limits of no more than two consecutive five-year terms for the president.

“This is a key part of the broader ‘party-fication’ of the state that is a major theme of the current constitutional amendments and legislative changes,” said Chinese University of Hong Kong law professor Ryan Mitchell, referring to the new anti-corruption body.

On Tuesday, China’s rubber-stamp legislature, the National People’s Congress, began a third and final reading of a draft supervision law that would extend the newly formed anti-graft body’s authority over vast numbers of workers in the public sector. State media has described the step as “aiming at a centralized, unified, authoritative and efficient supervisory network under the (Communist) Party’s leadership.”

The law would merge the party’s anti-graft watchdog body with one overseeing the civil service to form a new National Supervision Commission, defined as a political body independent of the Cabinet, courts and prosecutors, raising fears of political abuse.

The body will have the right to detain suspects for up to six months without seeking a judge’s permission. Authorities must inform the suspect’s family and work unit of their detention within 24 hours, except in cases where evidence might be destroyed or the investigation otherwise impeded, according to a text of the draft law.

Other details, such as where suspects will be held, who will be responsible for their welfare and what form of legal representation they will be permitted, have not been announced.

A chief flaw of the new commission is that it will operate outside standard legal procedures ensuring due process, said Mitchell and other scholars, including Hong Daode, a professor of criminal law at Beijing’s China University of Political Science and Law.

“There should never be two different sets of procedures when handling criminal cases,” Hong said.

Also Tuesday, the congress began a review of a major reorganization of government agencies, including the establishment of a Ministry of Veteran’s affairs to oversee the welfare of China’s millions of retired soldiers.

Veterans who served as far back as the 1950-53 Korean War have staged sporadic street protests, including in Beijing, demanding higher pensions and improved benefits. Currently, local governments are placed in charge of veteran’s welfare, creating huge inequalities in services and compensation across the country.

Plans were also announced to create a newly powerful regulator to oversee the scandal-plagued banking and insurance industries as they try to reduce debt and financial risk.

The move is in line with the ruling party’s efforts to gain more direct control over the state-dominated economy and reduce financial risk following a run-up in debt that prompted global rating agencies to cut Beijing’s government credit rating last year.

The new agency, a merger of separate Cabinet bodies that oversee banks and insurers, will be charged with “preventing and dissolving financial risks,” said the plan, submitted to the National People’s Congress, or NPC, for endorsement. It did not mention the third financial regulator, which oversees the securities market.

Separately, the plan also calls for creating a national market regulator, incorporating anti-monopoly, pricing and other powers from food and drug, industry and product quality agencies.

The government reorganization follows Sunday’s passage of a constitutional amendment abolishing term limits, allowing Xi to rule for as long as he wishes.

That move has crushed faint hopes for political reforms among China’s embattled liberal scholars and activists, who now fear even greater political repression.

In introducing the supervision law, the vice chairman of the NPC’s Standing Committee, Li Jianguo, described it as an “important measure in consolidating the steps taken by party center to deepen reform of supervisory system.”

The commission also replaces the party’s previous procedure for investigating corruption suspects known as “shuang gui,” whose opaque nature led to frequent allegations or torture, forced confessions and other abuses.

“Replacing ‘shuang gui’ with rigorously regulated detention will help settle a long-lingering legal problem,” Li told the NPC’s almost 3,000 delegates. “This has displayed our resolve and confidence to realize a full, law-based governance.”

Hong, the Beijing law professor, questioned that assertion, saying the commission would be free to operate with few constraints, especially in the detention of suspects and denying them the right to legal representation.

“Now they’ve broken all the restrictions,” he said.

China could generate more soft power if it would relax some of its tight party control over civil society ... Read More...