Children at the receiving end of rising divorce cases 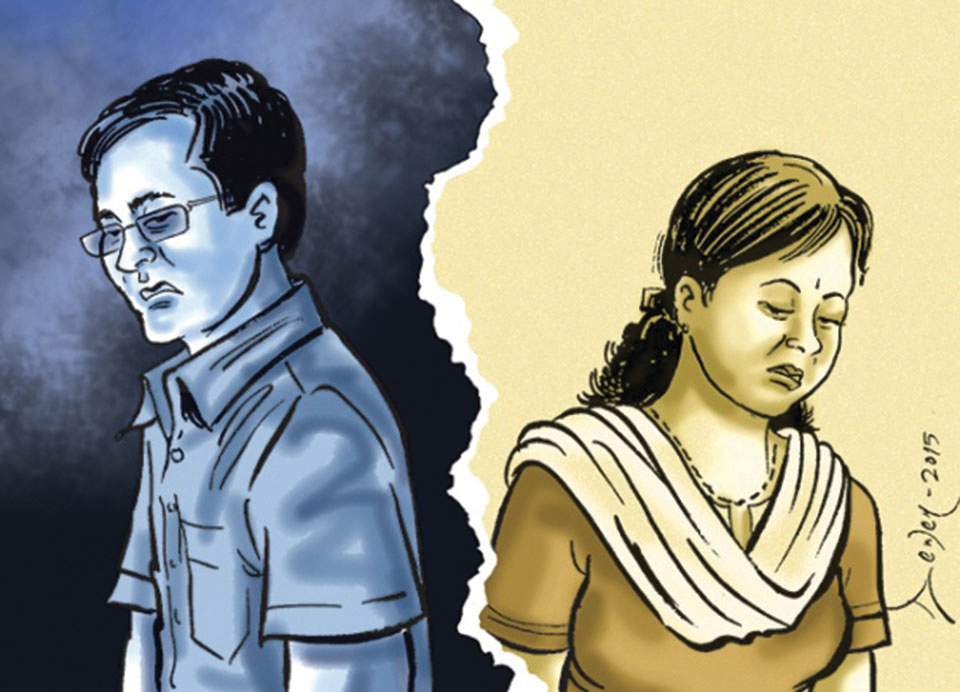 ITAHARI, Sept 22: Madhuri Sah (name changed), 17, always loved to go to school when she was a kid. She was active in extra curricular activities and loved to have fun with friends. Everything was going normal until one day when her parents decided to get divorced.

"I was too young to understand what they were up to," reminises Madhuri, a local of Ramdhuni village of Sunsari. "That day, suddenly I was left at my grandmother's house, which was not my choice," laments the 9th grader.

Madhuri's father had left for foreign employment five years ago. The parents' relationship soured over the years. One and a half years ago, the mother sought a divorce to marry another man. She took another child with her but left Madhuri at her grandparent's house.

"Mother took my younger brother along. She does not live that far away, but we hardly have any conversation," she reports.

She feels bad for her brother as well. Just like she misses him, he must be missing her too, she believes. "I don't feel good without him; I miss him most of the time. But I have no means to meet him," stated Madhuri.

Her grandparents report that Madhuri has not been able to cope up with the situation. And that has hampered her studies as well. Moreover, she is also burdened with household duties as her grandfather and grandmother are too old to carry out even normal activities.

After her parents separated, Asmita Chaudhari of Panchayan village of the district also found it very hard to move on. Her father has started to neglect her now. "He married another woman, and then he turned cruel towards all of us. Earlier, he was so sweet to me always," she says.

Asmita's mother is not in good health. She herself suffers from malnutrition and her two younger brothers do not look that robust, either. According to Lekhnath Subedi, principal of Panchayan Basic School, where the three children study, all the three are malnourished. "Because of the lack of care, they are weak and underweight. We have been trying to help them; the school provides free food to them so that they can avoid malnourishment," he said.

Shankar and Amit Chaduhari, forth graders at the same school, are also struggling with family problem. After their father recently married another woman and started living separately, the two boys who are brothers have shown less interest in studies. "They do not look as enthusiastic as before. After their father remarried, the boys look lost and unhappy," said Principal Subedi.

According to him, there are many children in the school whose parents have separated for one or the other reason. Foreign employment, financial crisis, extramarital affairs, abusive relationship and so on have been taking their toll on the institution of marriage, he noted.

"There are many couples who marry at an early age and regret later. Be it any reason, but an inharmonious relationship between the mother and the father quite disturbs the children, we have seen it here at the school," he said.

Meanwhile, a local teacher of Itahari, Netra Adhikari, advised a movement in order to stop the rising divorce cases. If relationships are getting toxic, one must get rid of that but one should not treat marriage too lightly either, he suggested.

"Because children are involved in divorce cases, we have to be very careful in taking decisions. Children must be given a healthy environment at any cost," he said.

Reports indicate that divorce cases are sharply on the rise. Earlier, men had to go through the municipality in order to file divorce. In view of the 'exploitation of women-friendly divorce laws', new laws have been introduced which allow men too to file for divorce directly at the court now. In the course of securing the rights of men and women, the government has not however come up with provisions to secure the rights of children who are left at the receiving end due to the separation of parents.

‘Beep’ goes the alarm clock In an instant I reach out to it For I no longer afford to stay... Read More...

IOFTC to be held in Itahari

KATHMANDU, Dec 28: The 12th International Open Friendship Taekwondo Championship (IOFTC) is set to be hosted in Itahari of Sunsari on... Read More...

69 including 15 lawmakers of federal parliament test positive for COVID-19, one succumbs to the virus
11 hours ago
Wide-body plane flying to Beijing to bring oxygen cylinders
12 hours ago

Congress formally decides to vote against PM Oli
2 hours ago