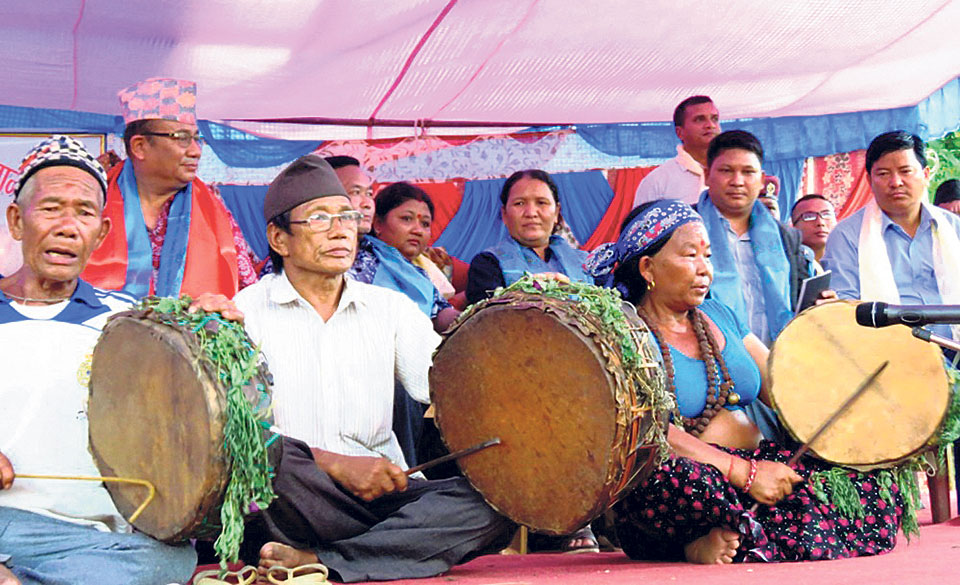 Chepang community members take part in rituals to celebrate Nwagi festival at a function organized in Shaktikhor, Chitwan on Friday. Members of the community living in Chitwan, Dhading, Makwanpur and Gorkha districts participated in the celebration. Photo: Sabita Shrestha/Republica

Chepang leaders stress conservation and promotion of their culture

CHITWAN, Sept 9: Raji Maya Chepang led a nomadic life when she was a child. Her family did not have a permanent house. She has vivid memories of moving from ‘one jungle to other with her parents, siblings and extended family members and that was considered a way of life. Along with that, she has lovely memories of celebrating Nwagi every year. Nwagi, in which the first of the year’s harvest is worshipped, became gradually popular with time, as the Chepangs turned semi-nomadic.

“In our times, let’s say when we were kids, life was totally different. We had our own culture, values, lifestyle, “she narrated. “Jungle was our habitat, we would collect food from jungle, we would also work in fields and grow crops but there was hardly any land of our own,” she added.

Not all the families of the tribal group own private land even today. Jungle sides continue to be their habitat. But they nonetheless have mingled far more with other communities by now. This has ‘eased’ their life in a way, but has also put their original lifestyle and cultures at risk.

“Things have changed over the years. We asked for political and social rights. We have also followed cultures of other communities,” reports Raji Maya.

They have embraced the Hindu festivals like Dashain and Tihar. ‘Dashain and Tihar are like our own culture, too. We celebrate those festivals,” notes Raji Maya. “But Nwagi is our very own festival. It is just ours because others do not celebrate it,” she claimed.

Culture conservation and promotion is something Chepang community has also begun to understand, according to Raji Maya. “Culture is what keeps your identity alive.”

Raji Maya is a Chepang woman leader. She urges the people of her community scattered in Chitwan, Dhading, Makwanpur and Gorkha districts to conserve and promote their original culture.

On Friday, Chepangs of those four districts celebrated Nwagi. It has been a few years that Chepangs celebrate the festival by organizing a huge function at one place on Bhadra 22.

“This day, Bhadra 22 was selected by us, as to organize it in grander way. Yesterday, we organized a great function to celebrate it,” informed another Chepang leader Jitendra Chepang. Jitendra, who is central president of Nepal Chepang Association, stated that the awareness that Chepangs have their own identity and they must feel proud of it and preserve it is very important.

“That is why we started organizing program on the day of Nwagi. This unites us, makes us stronger and any festival celebrated in unity makes it even a greater fun,” he explained.

“We are nature lovers, worshippers of nature and this festival reflects the same spirit. Modernity is always a threat to our culture and identity and we have to be careful about it. If we fail to conserve our culture, we will lose our identity,” he added.

Nwagi prior to such events used to celebrated in Chepang households. Gatherings were not a common thing during the festival. “We are now gradually making it a national festival. It should gradually became popular every new year,” he said.

Nwagi is celebrated to worship hew harvest. As per the ritual, they worship gourd, root vegetables, paddy and other grains. Following the ritual and offering their prayers the chepangs consume the harvest. Without performing these rituals, the new harvest is not supposed to be consumed,” Raji Maya explained.

Interesting part of the festival is the way drums are played at midnight and hymns sung while performing a certain type of dance. The program actually starts late evening but gets intense at midnight. “After puja of the grains, it is offered to our Kul devata and departed ancestors. Then its followed by a feast,” she elaborated.

Chepangs, who are considered one of the most disadvantaged and poor community across the country and are still struggling for owning private lands, pray for their grains to last for the entire year during Nwagi.

Men and women who perform the puja are called ‘Pandey Baa’ and ‘Pandey Aama’ (Respected father and mother). It is believed that they are chosen by the gods. “Pandey Baa and Aama are highly revered in our community because it is believed that they are given the responsibility by the lord itself,” she said. Raji Maya is also a Pandey Aama. She not only performs the puja but also is a well-known shaman of the community.

MUGLIN, Jan 16: A project has been rolled out to enhance socio-economic condition of Chepang community in Icchakamana rural municipality.... Read More...

Dahal is guilty in SPP: UML Chairman Oli
28 minutes ago