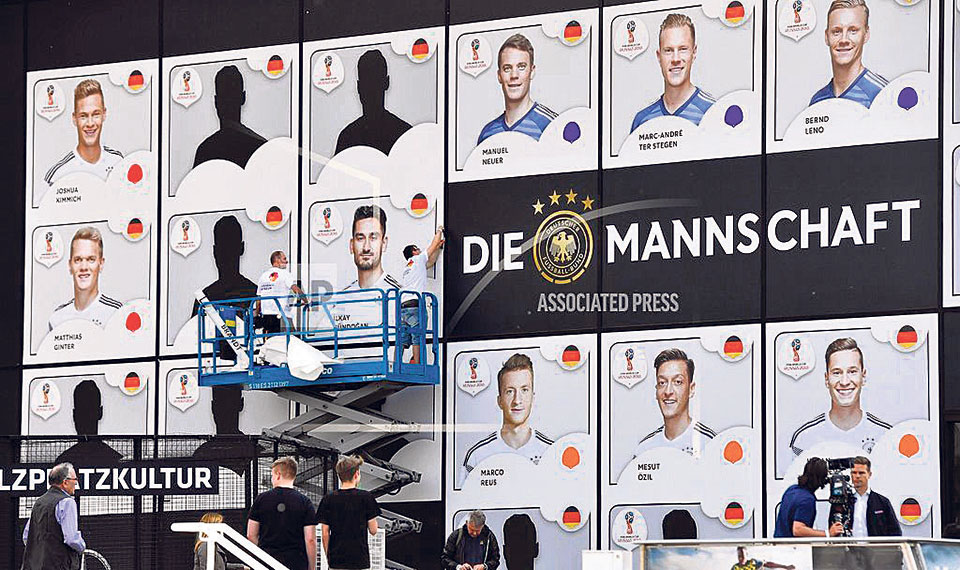 KATHMANDU, June 10: World champions Germany will be looking to defend its title when it kicks off its 2018 FIFA World Cup campaign in hope to break the fate that the earlier two World Cup winners Spain and Italy faced. The European sides went out of the group stages after winning the finals on the earlier occasions.
The aforementioned hoodoo was not a concern, though, for Brazil, as the five-time World Cup winner had topped its group in 2006, after winning the competition and its fifth in 2002.

Introduction
Germany became the only side to win all its games in the qualification campaign along with a staggering goal difference of +39.

Goalkeeping options
Joachim Loew's side boasts one of the best goalkeeping options in Manuel Neuer just returning back from injury. He has only played a match in a 2-1 defeat in a friendly against Austria on June 2 after his injury.
Marc-Andre ter Stegen remains a strong option considering his superb form for Barcelona this past season. Neuer's full fitness remains a concern for the Die Mannschaft. Kevin Trapp is the third choice keeper in the squad.

Solid defense
The 2014 winning trio of center backs Matthias Ginter, Mats Hummels, and Jerome Boateng are retained.
Among them, Hummels and Boateng are first choice pairing and will be supported by Ginter and Niklas Sule, if need be. Antonio Rudiger is the other option in the central defensive role.
Loew has selected two left backs in Marvin Plattenhardt and Jonas Hector, but the latter will most likely start, while the right back position is operated by Joshua Kimmich, the only natural option for the flank.

Mixture of experienced and young midfielders
A midfield with an average age of approx 28 years, Germany has a good mixture of experienced and talented young midfield.
31-year-old Sami Khedira, 29-year old Mesut Ozil and 28-year-old Toni Kroos, who also played in the last campaign, are the experienced players to command the midfield line again.
Khedira is the best defensive option for Germany, while Kroos will play alongside him in a preferred 4-2-3-1 system, whilst Ozil will take an advanced role.
They will be supported by 23-year-old Leon Goretzka, 28-year-old Sebastian Rudy, and 27-year-old Ilkay Gundogan. The latter two can be deployed in defensive roles.

Flexible attacking options
Loew preferred Julian Brandt and Julian Draxler at the wings leaving highly-talented and in-form Leroy Sane. However, they still have stronger options in Marco Reus and Thomas Muller in same positions.
Reus can play at both attacking flanks and also can fill in as an attacking midfielder, while Muller prefers operating from the right flank, the attacking midfield role as well as second striker.
Strikers Timo Werner and Mario Gomez will lead the final third.

Mexico Introduction
16-time World Cup participant Mexico appearance should not come as any surprise to the football world as it qualified by topping its group winning six, drawing three and losing one.

Experienced goalkeepers and defensive structure
Guillermo Ochoa is the first choice goalkeeper, while backed-up by Alfredo Talavera and Jesus Corona.
Mexico boasts a solid defensive structure as two over 30-year-old provide immense experience to the team. Hector Moreno and Diego Reyes are the center backs to lead the defensive line, while they will be supported by Hugo Ayala, who is also capable of operating as a right back. Carlos Salcedo is the preferred right back, while Miguel Layun is another option for the position. On the left flank, Jesus Gallardo will be the only option, if it goes for a four-at-the-back formation, while Edson Alvarez can cover for right back, center back and defensive midfield.

Midfield and attack
Rafael Marquez, a potential starter at the defensive midfield was a surprise inclusion in the squad despite being accused of involving in drug trafficking. He is only the third player to play in five World Cups.
Hector Herrera is the other man in that position, but he can play in the central midfield role as well, while they will be aided by Jonathan dos Santos.
The other candidate is Andres Guardada who can be deployed as an attacking midfielder too.
Mexico's attack consists of options in Jesus Corona, Carlos Vela, whilst Javier Aquino and Hirving Lozano are the players who can play in the right wing position, while Marco Fabian will operate on the left. Vela can play as a forward, while Lozano is equally good at the left.
Giovani Dos Santos, Javier Hernandez, Raul Gimenez and Oribe Peralta will lead the forward line.

Sweden
Sweden can mount a challenge for the second place despite Mexico being the favorites. It failed to make it to the finals in 2010 and 2014.

Introduction
Sweden qualified for the finals after finishing second in Group A behind France, and surprisingly ahead of the Netherlands, which knocked the 2010 runner-up out of the World Cup 2018.
Sweden also beat Italy in a playoff match 1-0 an aggregate, which saw the four-time World Cup winners fail to reach the finals for the first time since 1958.

Goalkeepers and defense
First choice Robin Olsen will be supported Karl-Johan Johnsson and Kristoffer Nordtfelt.
Sweden has selected four natural center backs among which captain Andreas Granqvist and Victor Lindelof will start, while they will be supported by Filip Helander and Pontus Jansson.
Mikael Lustig and Ludwig Augustinsson are the starters in the right and the left back positions respectively, while they will be given a stern competition by Emil Krafth and Martin Olsson respectively.

Midfield and Zlatan-less attack
There are several players in the team who can play both as a defensive or a central midfielder. Among them are Sebastian Larsson, Gustav Svensson, and Oscar Hiljemark.
Albin Ekdal is a central midfielder, while Marcus Rohden is equally good in both central and the right wing role. Despite the retirement of Zlatan Ibrahimovic, the team has not lost his goal-scoring instincts as it scored the most goals in its qualifying campaign, which was eight more than France. Marcus Berg and John Guidetti are the potential center forwards, while they will be rotated with Ola Toivonen and Issac Kiese Thelin, if needed.

South Korea Introduction
South Korea is making its eighth straight appearance in the finals after finishing second in Group A of the AFC qualification only behind Japan.

Goalkeepers and defense
Kim Seung-gyu is favorite to start between the sticks, while he will be given competition by Kim Jin-hyeon and Cho Hyun-woo.
Kim Young-gwon and Jang Hyun-soo are the two center backs backed up by Jung Seung-hyun, Yun Young-sun and Oh Ban-suk.
Lee Yong and Go Yo-han are the right backs, while Kim Min-woo and Hong Chul will operate left flanks.

Midfield and attack
Park Joo-hoo, Koo Ja-cheol and Ju Se-jong are the defensive midfielders, while Ki Sung-Yeung and Jung Woo-young are the center midfielders. Lee Jae-song and Lee Seung-woo will battle for the right wing spot, while Moon Seon-min will be on the left.
The star in the team is Tottenham's Song Heung-min who is capable of playing in the right wing and the second striker position, while Kim Shin-wook will be the center forward. Hwan Hee-chan will fight for his place with Wook.

KAZAN, July 7: Kazan’s official participation in the World Cup was coming to an end on Saturday as the Brazil... Read More...

KATHMANDU, June 7: Defending champion of 2014 FIFA World Cup, Germany and its final opponent Argentina seems to have an... Read More...