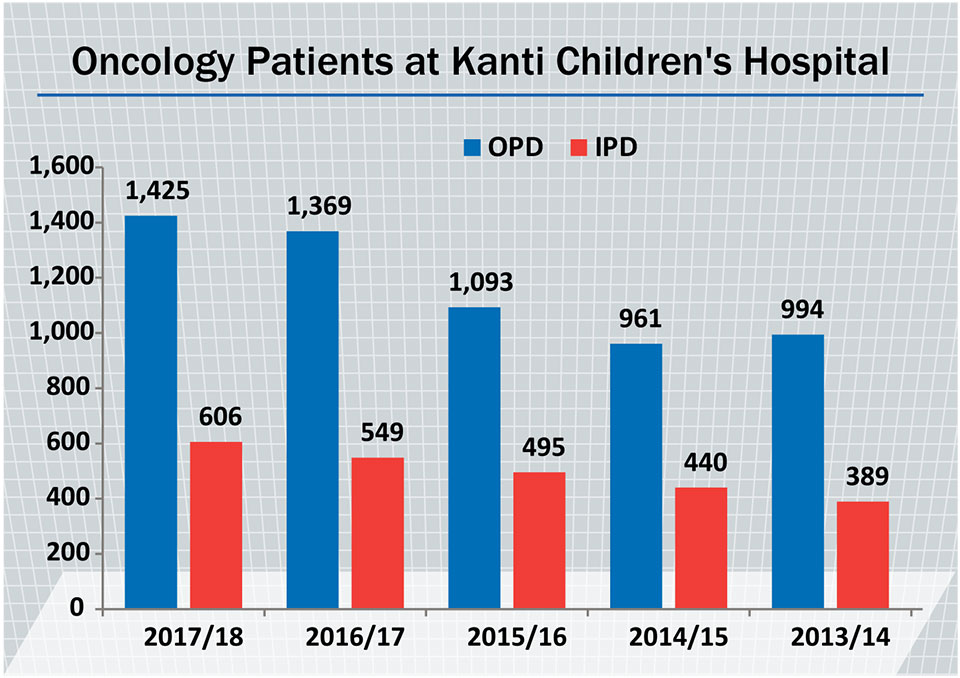 KATHMANDU, Aug 20: A mother carrying her about one-and-a-half years old baby was seen rushing to knock the doors of high ranking officials at Kanti Children’s Hospital (KCH) for treatment on Friday. Her baby was treated for a month at different hospitals in Chitwan, 145 km south from Kathmandu, and referred to KCH after the baby was diagnosed with pneumonia. “I came here on Thursday and my baby was admitted (Bed No 106) on that day. But no one came to examine her even after 18 hours. A doctor came on Thursday evening and referred to test her blood but no one came to see her after that,” she said, tears rolling down her cheeks.

At a time when the number of child patients is increasing annually in the country, the government led by KP Oli has slashed the budget to KCH by Rs 26.4 million in the current fiscal year.

According to pediatricians at KCH, the number of patients including cancer and asthma patients is increasing each year, “due to the consumption of vegetables and food stuffs containing pesticides, insecticides and other harmful chemicals.” “These agents definitely increase the risk of cancer and asthma,” they said, “But the government has slashed the budget for children’s treatment.”

According to KCH officials, the current government allocated Rs 192 million for this fiscal year while Rs 218.4 million was allocated in the last fiscal year. About Rs 140 million is spent on salaries and allowances and the remaining on purchasing reagents, tool kits, x-ray films, sanitation materials, office stationery, uniform for employees, and on Dashain allowances.

Established 57 years ago, KCH is the only state-owned children’s hospital in the country. The capital-based hospital, which registers 800-900 patients in summer and 600-700 patients in winter everyday, has been struggling to provide services to child patients.

The X-Ray (DR) machine became dysfunctional two years ago while its own oxygen plant broke down nine years ago. “The X-Ray machine is frequently repaired but still it does not work properly. The machine costs Rs 15-20 million while the oxygen plant can be made functional with Rs 15 million,” said Dr Ganesh Kumar Rai, executive director at KCH. “However, all allocated budget is spent on regular expenses and no money is left for buying medical equipment.”

“We are spending Rs 8 million to buy medical oxygen every year,” Dr Rai said, adding, “We don’t have any MRI machine here. We are in urgent need of one, which costs between Rs 15 to 130 million. If the government had not reduced the budget, we would have bought an X-ray machine this year.”

The buildings of KCH and oxygen plant were built with cooperation from Japan 27 years ago and the X-ray machine, too, was provided by Japan 15 years ago.

The government has not given any priority to children’s health, said the officials at KCH. There is a total of 39 government-approved positions for medical officers at the hospital. “Out of the 39 posts, only nine are occupied. However, only five are working now while four officers are on study leave,” said Dr Rai. He added that the hospital is fully dependent on 29 resident doctors, who are studying MD. “We have only two staff nurses while we need at least six of them for delivering minimum services.”

However, KCH does not have even a single specialized doctor in its orthopedic and ENT wards. Nor does it have a specialized pathologist and ophthalmologist.

“There are three positions of pathologists each for orthopedic and ENT wards,” said Dr Rai. “We are providing services for eye patients but there is no position of ophthalmologist,” he said. “We are yet to open specialized units of neurology, endocrinology, kidney diseases, and gastroenterology. We are forced to refer neuro patients to Tribhuvan University Teaching Hospital now.”