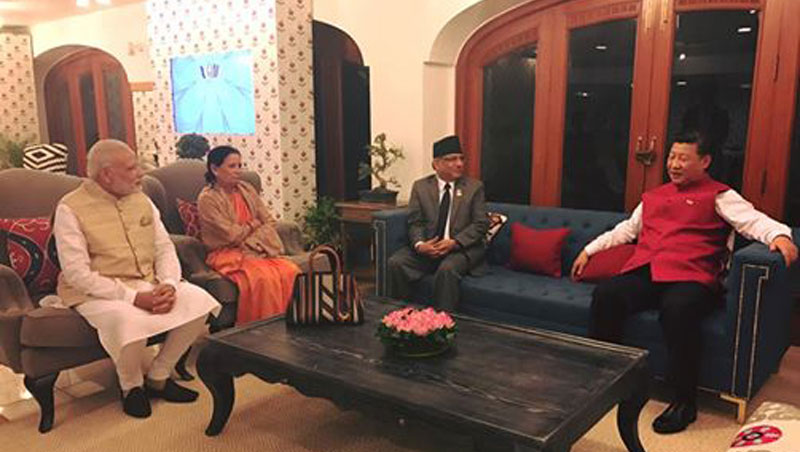 We should convince our neighbors that Nepal doesn’t see trilateral cooperation as a strategic concept, but as an economic and socio-cultural phenomenon
It is often said that Nepal’s prosperity depends on its geography. Development economists consider the landlocked status of Nepal a major impediment to its development. And so Nepal’s lack of access to sea has always been held responsible for its underdevelopment. Nonetheless, the signing of the Transit and Transportation Agreement with China in 2016 has altered the conventional identity of Nepal as a landlocked or “India-locked” country. Now, with the signing of the treaty, Nepal is land-linked both to the Chinese port of Tianjin and the Indian port of Kolkata. Due to this Nepal is expected to reap the benefits of being a bridge between its two giant neighbors.

Economists, development planners, foreign policy experts and the business community often accentuate the point that Nepal should strive to establish itself as a trade corridor or a transit country between its two giant neighbors, for its prosperity and development. Two questions immediately come up: first, whether the idea of development is confined to geography; second, whether the “bridge” is just a metaphor or it also accommodates concepts like “trilateralism” “trilateral partnership” or even “transit country”? This article aims to throw more light on the second part of the enquiry.

Idea in making
The bridge discourse is still an idea in the making; it has not been institutionalized. In the 1970s, late King Birendra had put forward the idea of developing Nepal as a gateway between South and Central Asia. Later, in 2005, while addressing the Afro-Asian Summit in Jakarta, former King of Nepal Gyanendra Shah spoke about Nepal’s readiness to be an economic transit point between the two Asian economic giants—India and China. Along the same line, Prime Minister Pushpa Kamal Dahal made the trilateral proposal during his visit to India in 2010. He again proposed the same during his April 2013 visits to both Beijing and New Delhi.

In 2012, former Prime Minister Baburam Bhattarai also envisioned Nepal as an ‘economic bridge’ between China and India. Unlike his predecessors whose emphases on the spirit of trilateral partnership were limited to statements and speeches, former prime minister KP Sharma Oli moved a step ahead by signing transit and transportation treaty with China in 2016. He had signed the treaty in the wake of the 2015 Indian blockade on Nepal.

With its signing, Nepal is now in a favorable position to act as a “bridge” between China and India, at least geographically. Along the same lines, incumbent Prime Minister Pushpa Kamal Dahal again floated the “bridge” idea during his Goa visit, where he simultaneously met the Chinese President as well as the Indian Prime Minister at the sidelines of the BRICS-BIMSTEC Outreach Summit in October 2016.

Why a bridge?
At a time when the trade volume between China and India is ever-expanding, the Nathula Pass is currently the only operational trade route between them, despite the two countries sharing 4,500-kilometer-long border. Considered perilous, snowy and expensive, Nathula Pass is not an all-season route. The pass had been closed following the 1962 India-China war; it only reopened in 2006.

Now, Nepal is being seen as another important transit point between India and China. But while China seems positive about the trilateral proposal of Nepal, India appears reluctant owing to its geopolitical sensitivities. Of course, trilateral partnership is the best way for China to get an access to South Asia. Similarly, it will benefit India by giving it access to Tibet. So it is for Nepal to try to convince its neighbors that it does not favor one over the other.

Assorted metaphors
Nepal has been given different metaphors due to its sensitive geopolitical location, but these metaphors need clarification. Although the idea of bridge is replacement of the old metaphor of “buffer” and “yam,” some also reckon the bridge metaphor is a reflection of Nepal’s equidistance foreign policy, which is at least inscribed in policy papers.

Although the idea of ‘bridge’, ‘trilateralism’ and ‘transit’ have been hitherto confined to discourse, they are different concepts which give more or less the same message that Nepal’s geopolitical situation has both opportunities and threats. Trilateralism prioritizes partnerships between China, India and Nepal on different issues, ranging from trade, economy to security. It is a partnership borne out of reciprocity and interdependence between the three countries. However, bridge is simply a metaphorical representation of such a partnership, particularly in terms of trade and economy.

But transit refers to a state or condition reached due to geographical proximity, connectivity, transport and most importantly infrastructure development, to eventually foster greater trade and business between India and China via Nepal. Such a differentiation is a need of the hour, particularly to convince our immediate neighbors that Nepal doesn’t view trilateral cooperation as a strategic concept, but as a purely economic and socio-cultural phenomenon.

Again, although speeches and opinions have been delivered time and again on the issue of trilateralism, there are no established declarations, agreements or policies to institutionalize the idea. Questions are even being raised whether the trilateral partnership damages Nepal’s special relationship with India or whether it embraces the relationship in a new way.

There has been no effort at the political level to make trilateralism work. Apparently, neither does the Ministry of Foreign Affairs (MoFA) have any such plans. Therefore the bridge concept is limited to an idea or a discourse for now. It deserves to be taken more seriously.