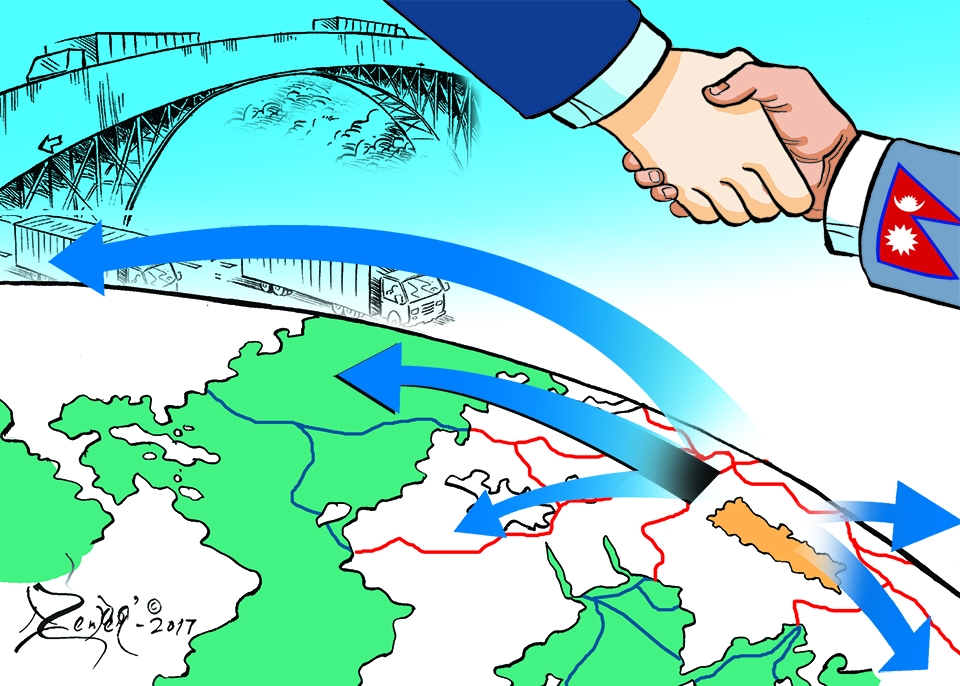 Nepal’s foreign policy maneuverings seem limited to India and China. Geographical proximity and rise of India and China justifies this to some extent. But Nepal has always struggled to maintain balanced ties with the two countries and address their interests. Nepal’s own interests get marginalized amidst big concerns of the two emerging economies. Our indigenous proposal to bridge India and China economically, for example, seems to have lost the appeal amidst effort to promote China’s Belt and Road Initiatives (BRI).

Though India does not quite like it, China is keen on materializing proposed China-Nepal-India corridor as one of the trading routes under connectivity pillar of BRI. This poses a challenge to Nepal’s balancing efforts. Today, Nepal’s policy of equidistance faces an existential threat.  Of course, Nepal is eager to reap benefits from the emerging markets in India and China but taking neighborhood into confidence is a big challenge for Nepal as priorities and concerns of China and India contradict most of the times.

Going beyond neighborhood to resolve problems originating in the neighborhood often becomes the biggest challenge for small state like Nepal. For instance, when India imposed a blockade on Nepal in 2015, Nepal could have gone beyond the neighborhood and filed a case against India for violating General Agreement on Trade and Services. Despite being a party to WTO, Nepal could not do so.

Then Minister for Commerce and Supplies Ganesh Man Pun carefully avoided using the term “blockade” while he was attending 10th Ministerial Meeting of World Trade Organization in Nairobi in 2015. Without naming India he only mentioned, “disruption of supplies and hassles in transit created a humanitarian crisis in Nepal”.  This is one example of Nepal’s reluctance to go beyond the neighborhood.

Nepal is the member of different international organizations and multilateral forums, where bilateral concerns are assessed under the principles of sovereign equality.

Although Nepal has access to Chinese port of Tianjin, and Indian ports of Calcutta and Vishakhapatnam, two-thirds of Nepal’s trade takes place only with India. Although both the countries are the members of WTO, which calls for the elimination of tariff on manufactured goods, Nepal-India bilateral trade treaty provides a place to impose a tariff on products including vegetable fats, copper and zinc oxide, and acrylic yarn. In such adverse conditions, which undermine the spirit of free trade, drawing assistance from multilateral forums should be the major priority of Nepal.

Nepal seldom attempts to go beyond the neighborhood. This is mainly because of Nepal’s asymmetric dependence on its neighborhood. Owing to the policy of appeasement that different governments in Nepal have been exercising in the neighborhood to protect their regimes back home, trade and development have often been unaccomplished ventures.
While Nepal expects to draw benefits from spillover effects of unrivaled development in the vicinity, the movements of goods across the borders haven’t improved.  India’s recurrent ban on the import of Nepali ginger is a glaring example. Trade Facilitation Agreement (TFA) under the World Trade Organization (WTO) could be the best option for Nepal to facilitate the movements of goods across the borders.

With an aim to get rid of all the trade-related hurdles existing in the neighborhood, Nepal became WTO member and submitted acceptance of TFA in January 2017 to WTO after Nepal’s Parliament ratified it. Still, 110 out of 164 WTO member countries have to ratify the protocol for its full implementation. Once fully enforced, it helps the land-locked countries like Nepal, which suffer transit barriers, in reducing the trading cost by accelerating movement of goods through quick release and swift clearance in transit.

United Nations Conference on Trade and Development (UNCTAD) is yet another option for Nepal to go beyond neighborhood to diversify trade relations.  UNCTAD allows Nepal to promote the export of its manufactured goods beyond India and China. Using the privilege of special tariff concession, Nepal can send its products to the developed countries on duty-free and reduced rates. UNCTAD not only supports countries like Nepal to come out of different layers of asymmetric dependence, and get integrated into the world economy, but also avails a platform to discuss problems related to economic development.

UNCTAD is an appropriate platform to deliberate how geopolitical complexities have been riveting Nepal’s longstanding aspirations for economic development because UNCTAD predominantly believes in tackling vulnerabilities, improving competitiveness and transforming economies by empowering people. UNCTAD’s support can be pursued to enhance the competitiveness of Nepali goods, including in preparing Detailed Project Report (DPR) for the projects that could be built under China’s BRI. UNCTAD’s assistance could be best utilized to end Nepal’s delay in implementation of China-led BRI projects. Although five different ministries have submitted names of 22 projects that could be built under BRI, they have failed to present detailed proposals.

Going beyond neighborhood fortifies Nepal’s role in international organizations and multilateral forums. It helps to free Nepal from the clutches of geopolitical vulnerabilities. Finally, it steadily lessens Nepal’s asymmetric dependence on the neighborhood.
It’s time for Nepal to think beyond the neighborhood.

NAWALPARASI, April 1: The Parasi-based district prison of western Nawalparasi has seen trouble with the adjustment of higher number of... Read More...

New govt in next few days, claims Dahal
20 hours ago

IN PICS: Biska Jatra kicks off in Bhaktapur
19 hours ago

Despite political uncertainty, country is moving in right direction: Nationwide survey
22 hours ago