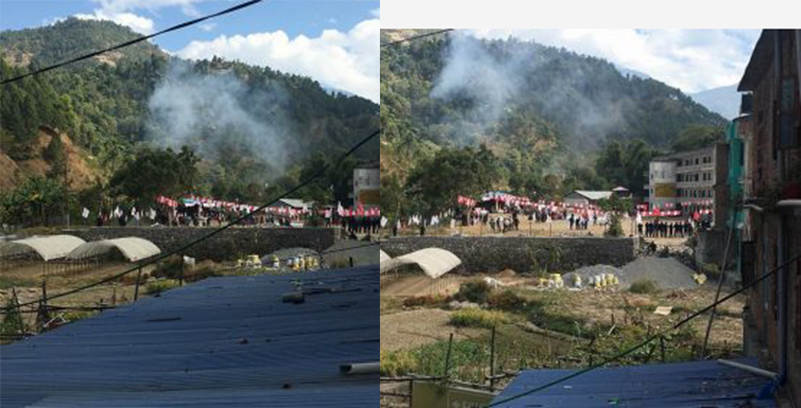 BAGLUNG, Nov 16: A bomb went off near a mass gathering organized by left alliance - CPN-UML, CPN (Maoist Center) and Rastriya Janamorcha - at Hatiya in  Galkot Municipality in the district.

A huge explosion went off sending a plume of smokes near the dumping site behind Galkot Multiple Campus when the top leaders of left alliance were addressing the mass meeting this afternoon.

However, locals said that they did not find anything when they approached the incident site despite a huge sound of explosion they heard.

“We heard a huge sound of explosion. But when we went to the incident site, we did not find anything,” said a local.

District Police Office, Baglung also denied about any information about the incident of explosion.

"I am in contact with our channel. I have not received any information about it,” said DSP Bisworaj Singh Thapa, of Baglung District Police Office.

People attending the mass gathering had run helter-skelter when the sound of explosion was heard.

Bomb goes off near election rally attended by Oli

DANG, Nov 22: A bomb has gone off near an election rally attended by CPN-UML Chairman KP Sharma Oli in... Read More...

JHAPA, Nov 28: An improvised explosive device went off near the house of Nepali Congress leader and candidate of Jhapa-3... Read More...