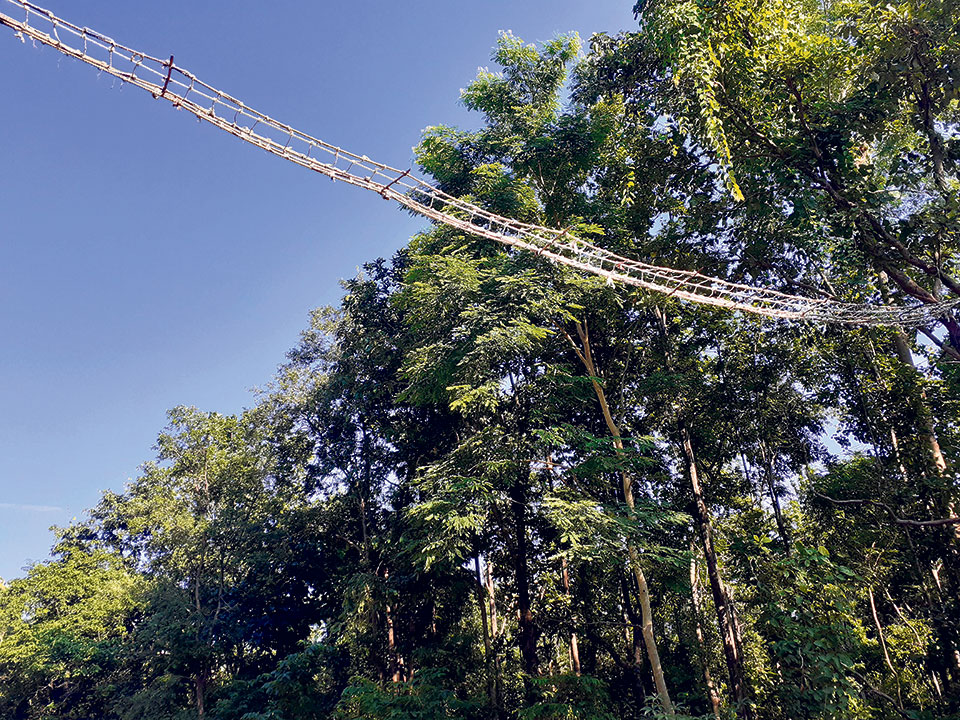 A canopy bridge made up of jute fiber is seen over the East West Highway in Banke National Park in this recent picture. Photo: Arjun Oli/Republica

Though there are speed limits, only a few drivers abide by them. Wild animals crisscross the highway as part of their day-to-day life.

NEPALGUNJ, Nov 28: A leopard cub died in a road accident Kohalpur–Babai road section of the Banke National Park. The cub was crossing the road when it was run over by jeep cruising at high speed.

Park authorities say that these types of accident have become more usual nowadays. It is common for wildlife to cross roads while they roam around the national park. But these crossings are becoming unsafe for them. Many animals lose their lives while some are injured.

There are legal provisions that punish drivers of vehicles that hit wild animals and leave them injured or kill them. However, more often than not, such drivers or riders flee the scene and are rarely caught. And the national park authorities agree that such situations persist.

“Many monkeys, deer, leopard have died in road accidents. There are speed limits on highways passing through the national park but some drivers don’t respect these limits. And some even hit animals on the road and flee the scene without taking care of the injured animal or reporting it to authorities concerned,” said Pramod Bhattarai, chief conservation officer at the national park.

“We have been trying very hard to stop this kind of crime. However, we need to additional resources for effective monitoring and implementing new ways to reduce wild animal accidents within the national park.”

According to Bhattarai, the most hit in road accidents are monkeys, that too of very special species. They are carefree and roam around. They even wait for vehicles to come as some drop food for them. “And they become the soft target, many monkeys die because they hang around the highways and sometimes get hit by vehicles,” he said.

“A very special species of monkeys, which is enlisted as a endangered species, have been the worst hit by road accidents,” he added.

The 102-kilometer road stretch from Shiva River area to Babai River of the East West highway passing through the national park is a very sensitive zone and home to many wild animals. Though the national park authorities have installed speed limit posts throughout the road, only a few drivers abide by them.

As part of their search for solution to reduce such accidents, the national park authorities came up with an idea to build canopy bridges. This bridges are expected to offer wild animals a safer way to cross the highway without getting in the way of the speeding vehicles.

As part of this pilot project, the national park has constructed such bridges at two places along the highway.

“It is the first time in the country that such bridge has been set up. We are hoping that the bridges will keep animals safe to some extent,” he said. “We have presently constructed such bridges at two places and have plans to construct a few more,” he added.

“Such bridges are expected to be beneficial basically for the animals like monkeys, fox, mongoose and squirrels. They are the animals which often get crushed under over speeding vehicles,” Bhattarai said.

Apart from constructing such bridges, park authorities has also installed billboards at several places along the highway to educate drivers on the impact of over speeding along the national park.

Bhattarai said that such billboards were installed with an aim to increase awareness about animal rights and safety, further adding that people take animal lives in accident in the lack of sensitivity towards animals and their habitat.

“The national park is building infrastructures as well as launching awareness campaigns to highlight animal safety on the highway. Our campaigns are also highlighting on the possible legal ramifications for drivers that hit an animal,” he said. Bhattrai added that the national park has also demanded concerned authorities to add more security points along the highway inside the park.

Along with that, the national park has also introduced timecards for drivers to restrict them from speeding.

The biggest challenge in wildlife conservation, according to Bhattrai, is the human settlements near national park. “National park and human settlement, when they are close, the clash is quite natural. We have tried hard to keep things in control, but they hurt each other, humans and animals clash,” he said.

Following attacks by wild animals, locals have time and again taken to street. They have demanded for compensation and safety of their life and property. “However, when we encroach upon animals’ space, we are doing unfair to them. So we have to be very wise while choosing place for settlement,” said Bhattarai.

Talking more about the bridge, Bhattrai said that their performance will be observed for a year. Based on the results, further plans will be made.

RANJHA, March 24: Wild animals inside the Banke National Park are frequently killed in road accidents as they have to... Read More...

KATHMANDU, April 14: The 22nd Wildlife Week has commenced from today under the theme – Youth Initiative: Ensuring Conservation and... Read More...

One arrested on charge of human trafficking
45 minutes ago