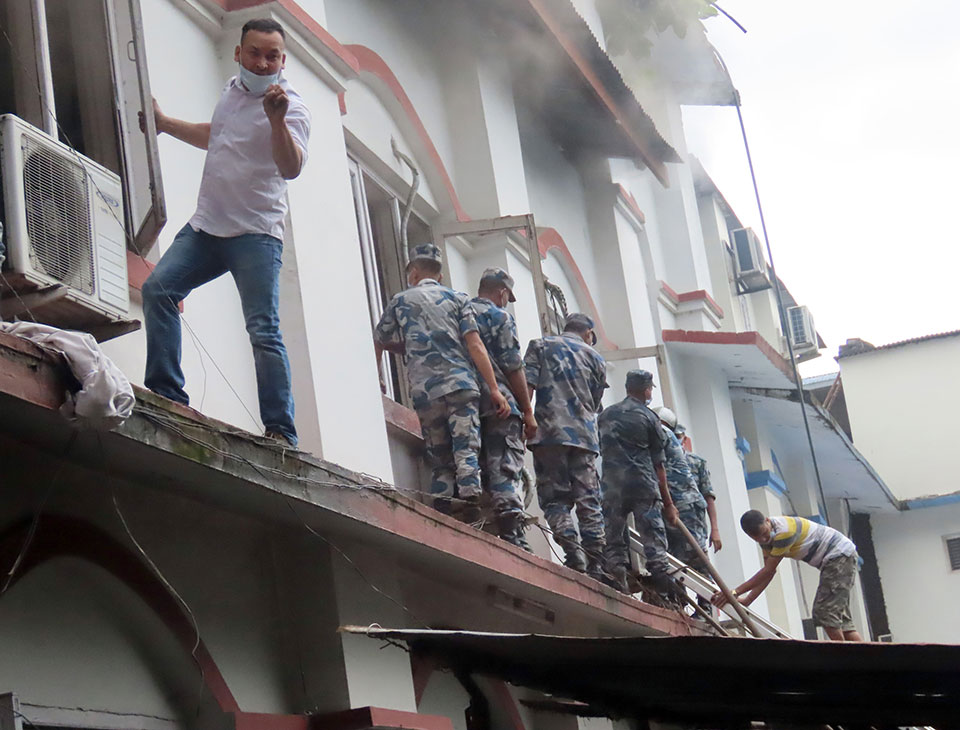 CHITWAN, Aug 19: Fire engulfed a building of the Rastriya Banijya Bank based in Bharatpur Metropolitan City-10, Chaubiskothi this morning.

Ek Narayan Koirala, Deputy Superintendent of Police (DSP) of Chitwan District Police Office informed the inferno broke out in the building at 7.30am today was brought under control after one-and-a-half hours of the incident.

The fire has gutted almost all physical properties located in the first floor of the two-storied building. The chamber of bank's branch in-charge was completely damaged in the incident. Assessment of the loss caused by the fire is being made.

Locals along with Nepal Police, Armed Police Office and Nepal Army doused the fire with the help of fire engines from Bharatpur Metropolis and Ratnanagar municipality.

Meanwhile, in another incident, fire took place in the Lions building at Lions Chowk in Narayangarh. The fire has gutted most of the physical items of the mobile shop in the ground floor. The fire was taken under control with the help of fire engines. Details of the incident are yet to make public.

Teen accused of lighting 85-year-old on fire, killing him

BIRMINGHAM,  Aug 19:  An Alabama teenager is charged in the slaying of an 85-year-old man who was doused with gasoline and... Read More...

Gyalpo Lhosar being observed
4 hours ago

FNJ urges Speaker Sapkota to incorporate concerns of stakeholders in Media Council, IT Bills
1 hour ago

Iran news agency: Death toll from new virus in Qom is at 50
2 hours ago