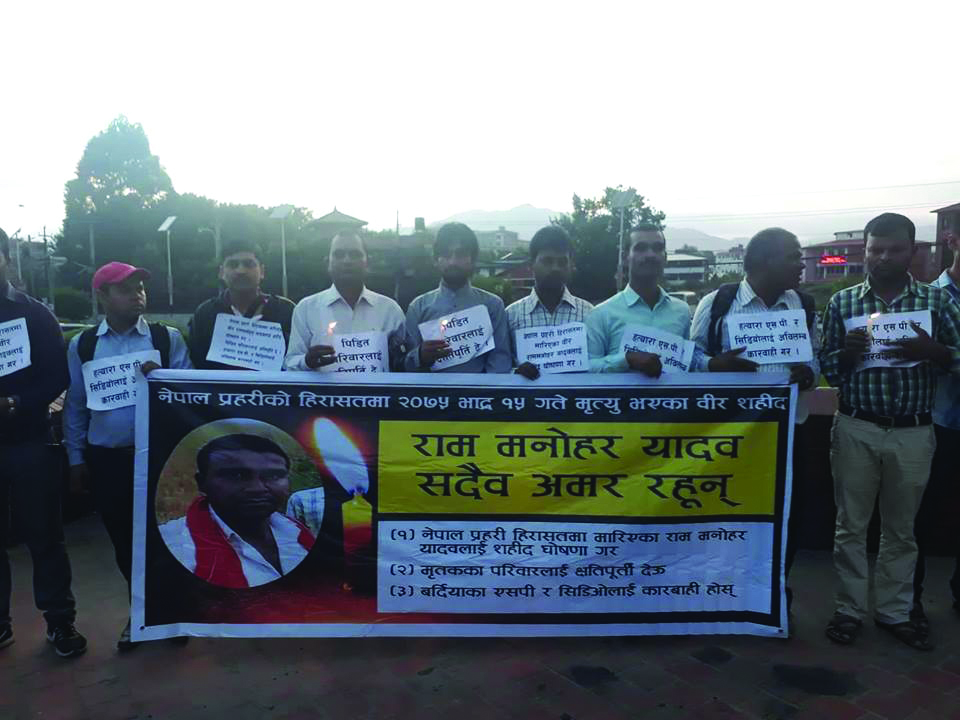 Death of a member of public, while in police custody, usually leads to intense media scrutiny and considerable public unease. But many such cases in Nepal go unnoticed due to lack of media intervention. Last year in September 2017, a 14-year-old Ravi KC of Bhojpur, died in the police custody in Dolakha. The same year on October 29, 2017, 16-year-old Priyanka Yadav was found dead in police custody. The Area Police Office (APO) of Mirchaiya had arrested Priyanka and 14-year-old Sanjay Sah on charge of murdering Bhavesh Yadav (Priyanka’s cousin). The very next day, Priyanka was found dead in the police station. This case is still under scrutiny.

This year we have seen another mysterious custodial death, which has left many questions unanswered. On August 23, Ram Manohar Yadav, a Free Madhes activist, was nabbed by District Police in Bardiya along with three other supporters on the charge of showing black flag to Deputy Prime Minister and Minister for Health and Population Upendra Yadav in Bardiya.

According to the officials, Yadav got unconscious inside the police cell on August 30 and was taken to Bardiya District Hospital in Gulariya immediately. He was later referred to Nepalgunj and finally sent to Kathmandu when his health condition worsened.

Yadav was declared dead shortly after being admitted to Teaching Hospital, Kathmandu on September 1. However, human rights organizations contest this version.  Human rights advocacy centre, THRD Alliance, blames police officials for failing to take him to the hospital for treatment on time. According to Deepak Passi, Yadav’s neighbor, who was accompanying him in the ambulance, Yadav died on the way to Kathmandu.

Yadav’s family has demanded investigation on the cause of death. Raut supporters say Yadav was subjected to brutal torture.  According to Bishnu Yadav, brother of Ram Manohar, his brother’s dead body was sent for autopsy without taking consent from the family and that the family came to know about it only on September 22. This is indeed mysterious. People have paid tributes to Ram Manohar in Rajbiraj, Dharan, Sunsari, Birgunj, Janakpur and Maitighar Mandala of Kathmandu.

A demonstration was held at Maitighar Mandala, Kathmandu on September 08. Thereafter, a regular protest is being held in Nepalgunj. His family has refused to receive the dead body putting forward demands that include fair investigation of the case, compensation to the bereaved family with the assurance of free education for his children and legal action against police official in Bardiya district.

But DPO of Banke has not listened to any such calls. On September 30, the police snatched the banner under which the locals and supporters were protesting. Locals of Banke called vehicular strike. Police used forces on family member of Ram Manohar, his supporters and his wife, Sunita Yadav. More than a dozen of protesters were wounded. Meanwhile, the dead body of Ram Manohar Yadav has not been handed to his family.

Ram Manohar’s mother and brother are fighting for justice for Ram Manohar. The attempts to cover up the case, flawed investigation and autopsy without taking family consent have made the case even more mysterious.

In this situation, the state must conduct serious investigation on custodial death of Yadav and must provide meaningful compensation to his family. Meanwhile, anti-torture legal provisions must be followed and applied in this case.

The bereaved family of Ram Manohar has been suffering for days. Police must resolve this case. Otherwise, it will erode its credibility. The government should find out what actually happened to Ram Manohar instead of trying to cover up the incident.

Death of an intellectual giant

K P Malla did not think like a commoner. He had a deep understanding of history, culture and values that... Read More...

There has been a serious breach of norms in making of provinces. Whose interest were our parties trying to serve... Read More...

MCC compact agreement cannot be amended only for Nepal: FM Khadka
12 minutes ago

Mother and son killed in accident
16 minutes ago