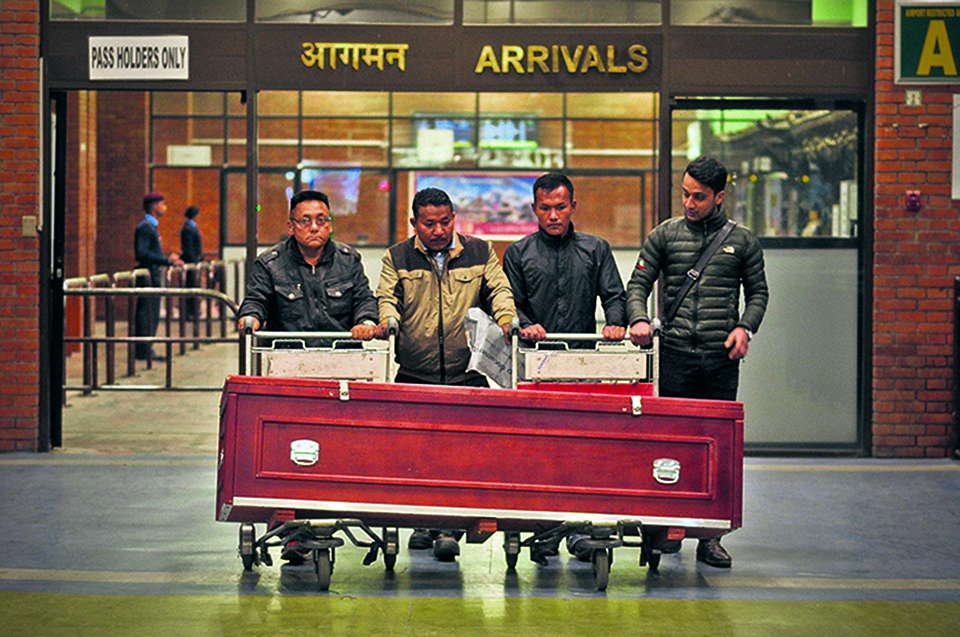 Nepali migrant workers who work in the open field of hot desert like climate in the Gulf are among the most affected by climate change. Climate change acts like a double-edged sword for them

At 9:45 am on May 28 this year, the Qatar Airways plane landed at the Tribhuvan International Airport from Doha. Along with over 100 passengers including Nepali migrant workers returning home from the Gulf on holidays, the plane was also carrying a red coffin. Inside the coffin was the body of 27-years-old Bishnu Bahadur KC, a resident of Pyuthan district of mid-western Nepal.

Shankar Dahal, a reporter from Kantipur daily, travelled with the body of late KC to his house at Okharkot, Machchhi. He provides a vivid account of how the grief-stricken family of late KC performed his final rites as the whole village mourned his untimely demise.

Qatari officials said Bishnu died of “natural causes.” But his friends said he was found dead in his bed. He was working in the scorching heat of Qatar since he had left Nepal ten months ago.

There has been no study of how climate change is impacting on the lives of tens of thousands of South Asian nationals now working in Qatar and other Gulf countries. But scientists say it is taking its toll as temperatures soar in the Gulf countries.

A report published by the International Labour Organisation (ILO) early this month predicted that increase in heat stress could bring productivity loss equivalent to 80 million jobs and global economic losses of US$2,400 billion.

Global warming is expected to result in an increase in work-related heat stress, damaging productivity and causing job and economic losses. The poorest countries will be worst affected, the report warned. “Heat stress will affect millions of women who make up the majority of workers in subsistence agriculture, as well as men who dominate the construction industry. The social consequences of heat stress may include increasing migration, as workers leave rural areas to look for better prospects,” the report added.

Climate change is not about what we usually experience as very hot or cold in everyday life. This is simply weather that keeps changing the way it used to be for that particular area in accordance to its geographic location in the planet. Climate change, actually, is the shift of that ‘usual position’ toward extreme forms. After climate change, the weather that everyone is familiar with for hundreds of years, will no longer remain the same but changes toward more hostile or become uncertain. This uncertain tendency brings a number of surprises for which people simply aren’t ready to cope with, hence leading to death, injuries or loss of properties and livelihoods. An example of such uncertainty and surprise is the first ever recorded tornado in Nepal that occurred on March 31, 2019 in Bara and Parsa districts that killed over 30 people, injured over 500 and damaged over 200 houses within a couple of hours.

Climate change is identified as one of the causes of migration to many youths who are dependent on agricultural business at their parental home. It’s been official now that agriculture sector is already under stress due to climate change for reasons such as water shortages, crop diseases and declining productivity of soil.

Temperature rise or global warming has been a global phenomenon and Nepali migrant workers who work in the open field of already hot desert like climate in the Gulf countries are among the most affected by climate change. In other words, climate change acts like a double-edged sword for poor Nepali migrant workers whose working environment is already reported to be one of the worst in the Gulf.

In general, climate change would hit hardest those who are poor, marginalized and live or work in danger zones. Therefore, it is not surprising to find Nepali migrant workers being among the most affected due to climate change.

Nepal will be in the frontline to face the worst economic impacts of climate change.  If the temperature grows 3°C higher, Nepal’s GDP by the end of the century will be affected by more than 60 percent, say the scientists.

So, what should the Government of Nepal (GoN) do to reduce the impact of climate change on millions of Nepalis working abroad?

First of all, the GON should advise Nepali workers to take precautions of extreme climate (often against the hot day, heat wave, sand storms, lull in the case of middle east and Malaysia; but the opposite in South Korea where snow storms and freezing cold days are usual) at the workplace as well as at their accommodation.

Second, the GON should use its diplomatic channels of concerned governments and its own embassies there to pay attention on the quality of workplace climate and their accommodation (because deaths during sleep is quite high among Nepali migrant workers).

Finally, the Department of Labour and Ministry of Foreign Affairs should develop a guideline in consultation with the Ministry of Labour, Employment and Social Security to address climate change related hazards being faced by Nepali migrant workers.

Until Nepal takes concerted measures to protect precious lives of its citizens—in collaboration with destination countries and UN agencies—bodies of youths like Bishnu Bahadur KC will continue to arrive back home in the red coffin.

Senior Research Fellow at Southasia Institute of Advanced Studies, Dahal is currently serving as the Chairperson of Nepal Water Conservation Foundation. Yogi is a Nepali journalist based in London and writes on development issues