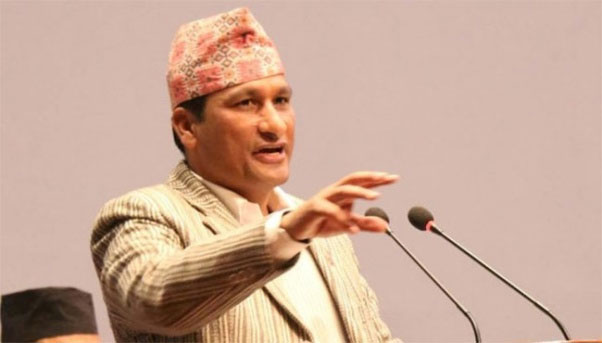 KATHMANDU, April 2: CPN (Maoist Center) leader and Minister for Forest and Environment Shakti Basnet said that the left alliance government will be converted into a majority government after the formal unification between the two communist parties on April 22.

Speaking to journalists at the ministry on Monday, Basnet said that unification between the ruling CPN-UML and CPN (Maoist Center) has become almost certain for April 22, establishment day of Communist Party in the country.

“We have been mulling over few unification models but unification between the two left parties is certain for April 22, alliance government will be converted into majority government of single party since then” he said. Statement of Basnet has come amid doubts over the left unity soon with Maoist Chairman Pushpa Kamal Dahal claiming equal share in the unified party and UML leaders declining the offer publicly.

In different note, Minister Basnet said that his ministry has been working toward controlling dust in Kathmandu, which is among major sources of air pollution. “My first priority and plan will be freeing Kathmanduities from the dust but controlling air pollution may take time,” he said.

Unveiling his plan, Forest Minster Basnet said that he will focus on multidimensional utilization of the forestry resources and develop it as contributor to the Gross Domestic Product of the national economy.

The ministry has been working to finalize the forest policy aiming to develop forest as contributor to the prosperity of the country.

KATHMANDU, Dec 19: Minister for Information and Communications Mohan Bahadur Basnet has said the government is eager to hand over... Read More...