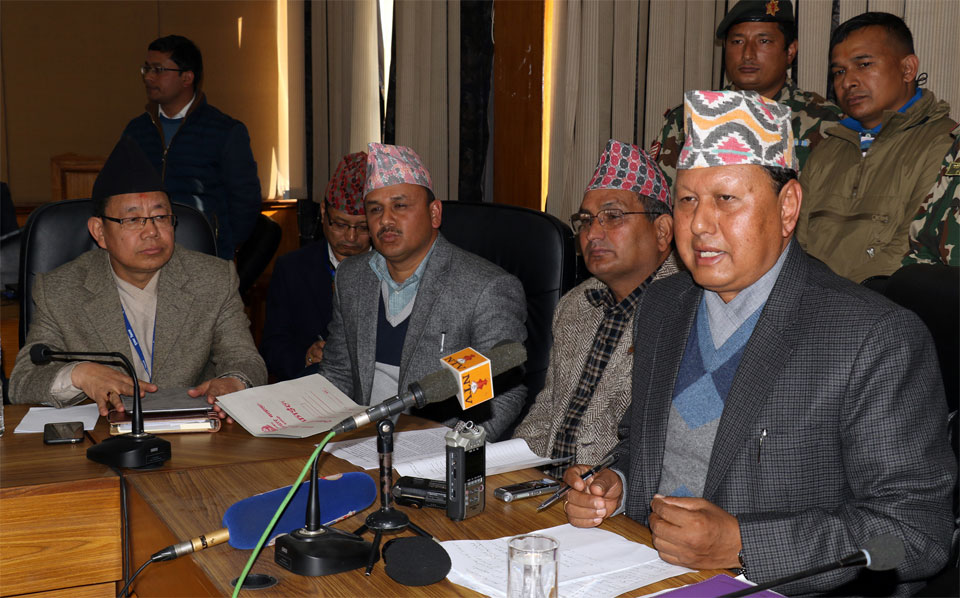 Minister of Information and Communication is addressing press meet, (Photo by RSS).

KATHMANDU, Dec 19: Minister for Information and Communications Mohan Bahadur Basnet has said the government is eager to hand over the leadership as soon as possible through a due constitutional process by highly respecting the people’s mandate expressed through the recent elections to the House of Representatives and State Assemblies.

Minister Basnet,Spokesperson for the government said, “It is a matter of sadness that various ill-intentioned and suspicious expressions are coming out despite the frequent public statements given by Prime Minister Sher Bahadur Deuba expressing his eagerness to hand over the power through a due process."

Minister Basnet said this at a press meet organised to make the government's views regarding the contemporary political issues public on Tuesday.

The incumbent government took its responsibility on June 6 this year with the mandate of holding the second and third phases of local-level elections and the twin elections to the House of Representatives and provincial Assemblies.

“Both elections have been already concluded in a peaceful and fair manner.”  Leaders of some political parties had been casting their doubts over the elections even on the eve of the elections day, he added.

He further added, “The government's attention has been drawn towards the beginning of expressions of irreverent, unfounded, baseless and fabricated statements from some political quarters with the declaration of the poll results.”

He said he was hopeful that people would truly evaluate the history and contributions of the party which had established civic rights and democracy by fighting against the Rana, Panchayat and Royal systems.

It was really unfortunate to falsely believe that works execution and performance NC President and Prime Minister Deuba who has a significant role and contribution to bringing the country to a current political situation (democratic republic) will go beyond the parliamentary practices and limits determined by the laws, he added.

He said that the government had presented Act related to National Assembly elections as a bill at the Legislature-Parliament, it has not been passed in lack of political consensus.

Minister Basnet said, 'The government searched an alternative to hold the election on the scheduled date even after issuing an ordinance. The government had submitted the ordinance to the President before two months. It has still been stuck at the office of the President. It is the matter of concern of all."

He expressed the belief that it would make easy to handover the power along with work execution if President passes the ordinance.

The Communications Minister on the behalf of the government requested the President for the same.

He further said that arrogant attitude has been found developed in some political parties after the result of first-past-the-post election.

Minister Basnet also clarified that there is a provision of formation of local-level, Provincial and Central governments only after the House of Representatives, Provincial Assemblies and National Assemblies take full shape.

New govt to be formed as per constitutional provisions

The government spokesperson Basnet said that the process for the government formation would start as per the parliamentary tradition once the individuals to be nominated to the federal parliament are specified after the Election Commission allocates the proportional representation seats of the House of Representatives and State Assemblies.

"Constitutionally there is a mixed system of election in the country and it would be one-sided to make up one's mind by only considering the first-past-the-post election results," he said, adding that it would not be relevant, in the present situation when even the number of seats secured by the parties is not specified, to make any type of exaggerated comment by conjecturing whose government is to be formed and what type of government.

Making it clear that the government did not at all want to prolong its stay in the government by inviting legal complexities, Minister Basnet said instead the government was looking for legitimate ways to handover the power smoothly.

"A serious situation has arisen in which all of us need to mull over as to why the election of the National Assembly, the upper House of the parliament, which is an important organ of the governance system, could not take place," he said.

"May be you are not going to straightaway capture the Executive and assume the post of Prime Minister and Minister once you take the winner's certificate with the declaration of the first-past-the-post elections," Minister for Information and Communications said in sarcasm. He said that the Election Commission has not yet given information that all elections have been concluded in accordance with the law.

Stating that the political parties themselves have not fulfilled responsibilities as electing the leader of their parliamentary party, among others, the government spokesman also reminded of the history in which the party that was in the third position in the parliament in terms of numerical strength leading the government in the past.

While sharing the bitter experience of the past in which a new government could not be formed even in six months after the Prime Minister of the day had resigned as the legal processes were not fulfilled, he, on behalf the government, thanked the Election Commission, the security bodies, the national and international observers, journalists, all the employees concerned and the voters who helped conduct all the elections. RSS

UML will not join next govt: Minister Rai

BIRATNAGAR, July 29: Minister for Information and Communications Sherdhan Rai today clarified that the CPN-UML would not join next government... Read More...