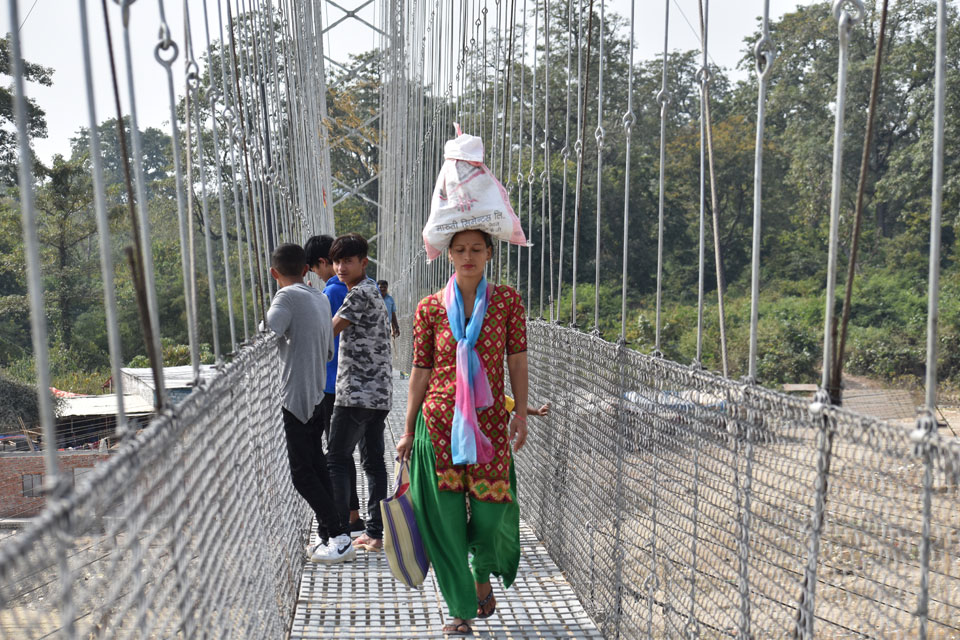 Commuters pass over a suspension bridge constructed over the Kamala River connecting Siraha district with hill settlements of Dhanusha, Sindhuli and Udayapur district in this recent picture. | Photo: Mithilesh Yadav/Republica

SIRAHA, Dec 3: Nanu Dahal has frequented Bandipur of Siraha several times in her life. But it was never easy as it nowadays for the local of Mainbatti of Dhanusha district. She had to walk for hours to reach the destination and return home. However, nowadays only an is enough for the trip, thanks to a new suspension bridge and a newly trekking route.

"Suspension bridge over Kthe amala river and then the new route made it possible to cut down the travel time. Now, it's a matter of just one hour. In two hours, I can go there and get back home," she said.

For the locals of Siraha, frequenting Bandipur is hardly an option. Lack of availability of essential goods around the villages forces them to go elsewhere for shopping. And Bandipur is their choice for several reasons. "We are used to visiting Bandipur for shopping because it is near and we can buy a variety of goods at cheaper rates there. Other markets are even far away," Dahal said.

Earlier, there was a mountain on the way and getting through it was a hassle. Similarly, crossing Kamala River was not another hassle. Kamala herself had on occassions barely survived from being swept away by the river while trying to cross it.

"But there was no other way. We had to cross it to get to Bandipur. And in monsoon, it would pose serious threat. Yet, we made the trips," reminisced Dahal. "Now, we frequent Bandipur even more, as it has become far easier. We feel more connected to the hills."

The bridge has indeed connected Madhes to the hill. The bridge and the new trekking route have relieved people of several villages in Madhes. From Mainbatii to the bridge, it is half an hour of walking distance. Right after crossing the bridge, public vehicles offer rides to Bandipur which takes less than half an hour. Even if one chooses to walk, it is not a very long distance.

"Because vehicles are available, we prefer that. Even if we walk, we can easily reach Bandipur these days," Dahal reported.

There are several villages in Siraha where even basic commodities are not easily available. People share stories of the shortage of salt, sugar, and fuel, among other things.

"If we need to buy clothes, utensils, home appliances, we have to set for Bandipur," Dahal stated.

However, things are changing now. New shops are opening up in their own localities, too and this trend is giving them the option to buy things at home instead of traveling to Bandipur.

"When we didn't have a bridge, there would be short of goods in our local market. As such getting all the commodities at the local shop would be a matter of luck," said Dahal. "Now, it is no more like that. Our local market is expanding and they sell quality products."

Locals state that the bridge and the short-cut route to Bandipur have given a new life to their villages. The bridge connected the people of Dhanusha, Sindhuli and Udaypur with Siraha.

"This bridge has linked Siraha to hilly districts. This has narrowed down the distance between Madhes and the hill," Dahal said. "This has put an end to tough and risky journies that people had to make for traveling. Life has become much easier."

Bhola Mahato, who opened a grocery store near the bridge as soon as it was constructed last year believes that the villages in Siraha are going to develop now.

"I opened this shop last year as soon as this bridge came into existence. In this short span of time, people's life has changed greatly. The mobility, look at this, the crowd here around," he observed. "Earlier, this was a silent, remote location."

Mahato keeps his shop open till late evening. Costumers come and buy one or other thing. He is happy that he is doing brisk business. And he hopes the best time in his life is yet to come. "I have heard that they are making a concrete bridge here. Once that is done, everything will be totally different," he said. "Business will grow manifold as soon as vehicles will start passing from here."

According to Shyam Kumar Manandhar of Damar village, the suspension bridge is a new lifeline of the people of the remote villages. And if the dream of concrete bridge realizes, people will no more remain poor, he noted. "We are poor and deprived of opportunities because of the lack of connectivity with other towns. This suspension bridge is a new gateway for us to connect with the outer world. And when the government builds a new concrete bridge here, we will have all the basic amenities here itself. In such a condition, there won't be a need for us to go to other places"

LAHAN, Nov 20: The diesel tanker which was hijacked on Tuesday was found empty in Dhanusha on Wednesday morning. Police... Read More...

KATHMANDU, April 29: Police in Siraha on Friday have recovered the dead body of a two year old child, who... Read More...