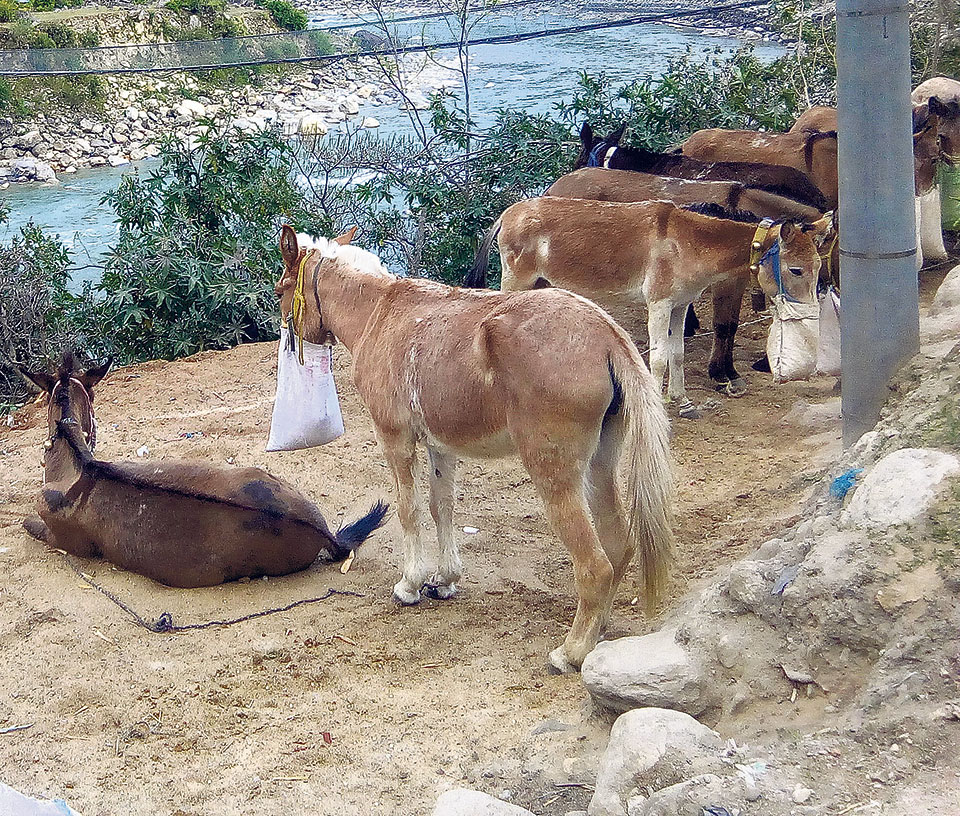 Stranded mules rest on the side of the road that was blocked by Talkot Rural Municipality, Bajhang on Wednesday. Photo: Jagat Khadka/Republica

“They (locals of Saipal Rural Municipality) conspired against us. It is very anarchic,” said Dabal Jethara, former vice chairperson of Melabisauna Rural Municipality. “It has been a decade since we have been picking yarsha in Farali grasslands. But they secretly registered the grasslands as a community forest and prevented us from picking yarsha in that area. How can they reach such a decision unilaterally? This is not fair,” he fumed.

Aggravated locals had reached out to the District Forest Office (DFO), District Administration Office (DAO) and the local administration seeking their intervention. They claim authorities concerned did not show a willingness to intervene and they held a meeting to decide further actions for resolving the situation.

“Nobody paid heed to our complaint. We sought the intervention of the forest, police and the CDO office. But nobody extended assistance on the issue,” informed Jethara. “Then we organized a meeting and decided to block the road to the yarsha pockets. Tit for tat!”

Hence, mules and yarsha pickers on the way to Saipal Rural Municipality got stranded on the way. “Travellers who might not be travelling for yarsha related business have also been stranded because of the blockade. But there is nothing we can do. We have to fight for our rights,” Jethara explained.

According to him, the road was blocked since Tuesday. But formal notice was issued on Wednesday. “We do not have any kind of enmity with the people of the other villages. We actually have a social-cultural bond as marriages are arranged between our community members. But we were forced to take this step,” said Jethara. He informed that all the concerned offices of Saipal and Talkot rural municipalities have also been notified of the move.

Also, according to Manbir Gharti, chairperson of Talkot Rural Municipality – 4, it was a reactionary decision to the block the road as the people of Saipal Rural Municipality ‘used their rights over their community forest’. “They used their rights to restrict access to their forests for others. We used our rights to block the road that is constructed on our land,” he said.

Gharti added that the road would be opened as soon as the people of Saipal Rural Municipality let others visit the Farali grassland to pick yarsha. “Or else, they cannot pass through this road. It will remain blocked.”

When reached out for a comment on the issue, Rajendra Dhami, chairperson of Saipal Rural Municipality, said that they were in favor of resolving the situation. “We do not want any conflict, we want harmony,” he said.

“As local government, we do have some rights and we have used it. In doing so, we have not breached others’ rights. We will seek a legal solution of this matter,” said Dhami. He even added that the grassland in question was turned into a community forest for conserving it. It was registered as a community forest three months ago.

Blockade of the road has deprived people of Saipal Rural Municipality access to essential commodities and medicines and the situation will worse soon if it is not resolved, Dhami said.

Local administration unaware Even though dozens of mules and yarsha pickers have been stranded at Saipal Rural Municipality the local administration has expressed unawareness about it. The CDO office and police stated that the matter has not been reported to them.

According to assistant Chief Administration Officer of Bajhang, Ram Bahadur Sarki, the matter would be taken care of. “The CDO is presently busy attending a seminar. We are not aware of the development. We will reach out to the concerned officials and try to resolve the situation,” said Sarki.

He added that he does not know ‘which two villages clashed for yarshagumba’. “I just heard that people of two villages are confronting each other over yarsha. It is not legal to block a road, no matter the purpose,” he said.

Meanwhile, DSP Surya Bahadur KC stated that he has not been informed of the blockade. “I am not aware of the situation. There is a police post in the area and we are trying to get related information, “he said. He added that a police post at Melbisauna has been ordered to provide security in the area.