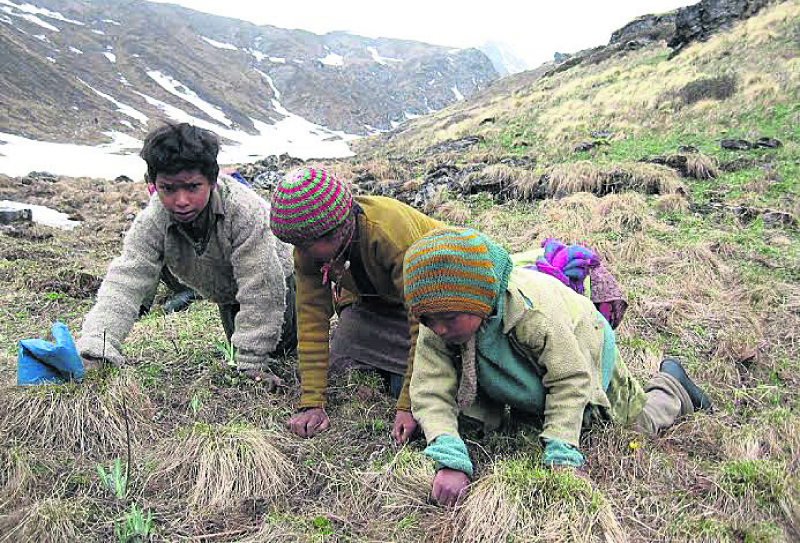 NEPALGUNJ/DARCHULA, April 28 :Sunita Budha of Dhulobheri, Dolpa used to be busy around this time of year in the past making preparations for the family’s journey to collect yarsha. She would find herself in Patan area of Darchula to collect yarsha by first week of May. However, this year she is still at home because of the approaching local elections.

“This year I am equally or busier than the previous years, but this time it is not for yarsha. This is for election,” she said. “We will collect Yarsha later. It’s not as important as the local elections right now,” added Budha, who is also district secretary of inter-party women’s alliance. If the elections are conducted on time, she hopes to collect her share of yarsha.

Budha’s case represents the general mood in Darchula. Though yarsha collection would keep them busy around this time of the year in the past, this year local elections are the talk of the town and has become everyone’s business nowadays. While around 70,000 to 80,000 people annually leave home for the collection of the fungus, this time the figure might be greatly affected by the elections.

“In the past we used to make preparations for our journey to collect yarsha during April and set out by mid-May. By the end of May we would be busy collecting yarsha,” said Ganesh Gurung, a trader from Dunai, Dolpa. “This time, the past routine has not been followed by many. The nearing elections have affected our traditional working schedule as some locals are prioritizing elections over yarsha. Even I am in dilemma whether or not to head out for yarsha,” he added.

He shared that only few are preparing to set out for yarsha collection and added that locals are worried that they might have very less time to collect the fungus if they head out for collection post-elections. “Even if they go right away after casting vote, it will be very challenging for traveling to patan and more in collecting yarsha because of the cold and rain,” he stated.

Pasture lands in higher altitudes of the region, locally known as patan, are thronged by collectors from province number 5, 6 and 7. However, locals of province number 5 and 7 are in dilemma as elections in their area will be conducted in the later phase.

“I have been collecting yarsha for the past seven years. But this year I am going to miss it,” said a local of Sulichuar, Rolpa, Jaiwan Magar. “I have to forsake the income that my family would have made by collecting and selling yarsa because of the elections. The government has given hard choices. And I am still not sure what I should do,” he added.

Locals and political parties have been equally worried with the coinciding of yarsha collection season with the local elections. Parties are concerned that there would be fewer voters because of the yarsha season. And their concerns are well founded. According to Magar, unlike him, many have already set out for yarsha collection. “Some have given priority to election, some have given to yarsha. It’s a personal choice,” he said.

Yarsha collectors live at these high altitude pastures for around a month. There is stiff competition between the collectors for collecting the fungus. This annual event sometimes even has fatalities, Magar said. “Sometimes, people fall sick or get injured. In worst case some even loose their life. The entire journey is full of risk despite safety measures adopted by security forces and the park authorities,” he said.

Yarsha is a major source of income for the most of region’s residents. Basically, the locals of Api-himal, Byas, Marma, Duhu and Naugad village municipalities largely depend on income made by trading their once-in-a-year collection of yarsha.

According to Khadak Badal’s, chief of election campaign department of the CPN - UML, estimates around 40 percent voters would be affected by the yarsha collection season. “We might lose 40 percent voters. The government has not been adequately sensitive towards this grave issue,” he remarked. “If they attend elections, they will miss their family’s major source of income. If they miss election, they won’t be able to exercise their democratic and civil rights,” he added.

Similarly Nepali Congress leader Govardan Kali, said that people must be encouraged for opting to vote in the elections instead of collecting yarsha this year. While making this suggestion, he however conceded that the many residents won’t do so as it would take away their major source of income.

“We have been urging the locals to prioritize elections over yarsha collection. Though they agree, most of them are unwilling to do so. It’s difficult for them to do so as it’s a matter of their family income and more so because most of these families are dependent solely on yarsha to meet their family expenditures.”

KATHMANDU, March 21: A Joint Election Operation Center (JEOC) to be formed under the Election Commission (EC) will mobilize over 200,000... Read More...