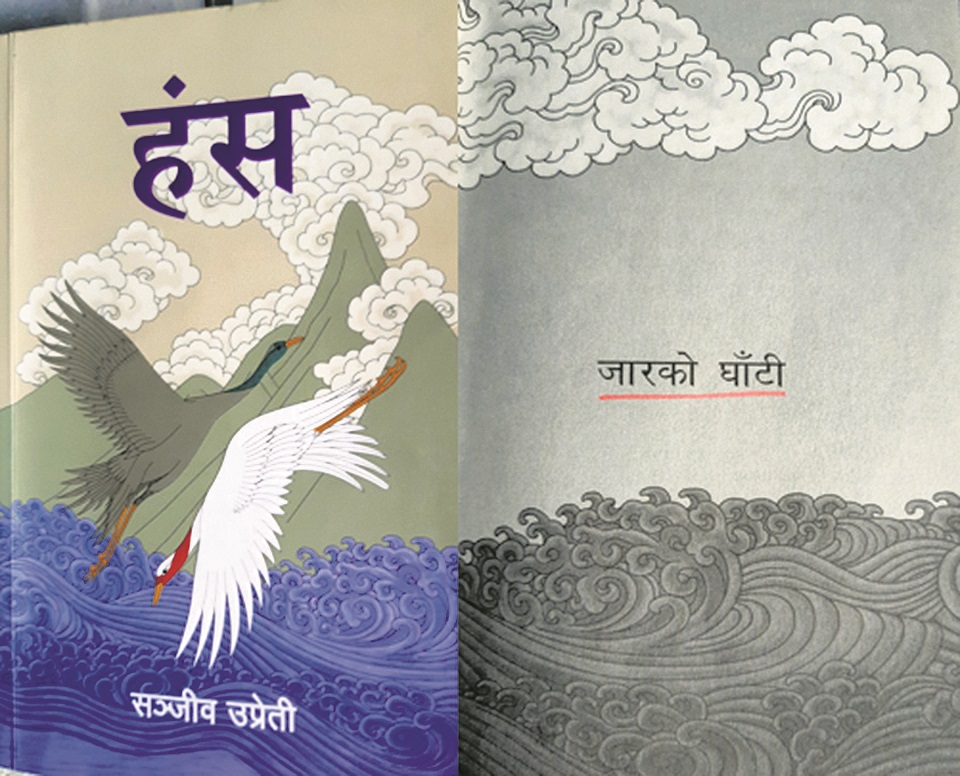 Sanjeev Uprety has rightly depicted the social phenomenon of Nepali people. The narrator’s wife goes to America through DV lottery and finds herself out of the frying pan into the fire

It appears that there is always somebody marketing somebody’s product. ‘Sajeev sir has written a novel called Hansa. Did you read it?’ an assistant professor of a university chirped at a gathering. The way he showed reverence to the writer made me curious about the book and ultimately I went to a bookshop and bought one.

Frankly, I’m a pretty slow reader. Two of the reasons could have been that nominal reading during my school and college life and my habit of going through every detail of texts.

Anyway after looking at the front cover and reading the blurb at the back, I turned pages to the page where twelve titles were listed. Seeing this, I had an impression that the novel looked more like the simple anthology of dozens of stories rather than a whole novel where stories within stories would be woven beautifully by the threads of words, phrases and sentences. After I finished reading, I discovered I was wrong. All the stories were inter-linked and that the story began with ‘Taudah’ and ended with the same. Taudah is the name of a pond which is in Kirtipur, Kathmandu.

In this article, I would like to delve into only the first chapter ‘jaarkoghaanti’ as it will not be possible to include other analyses of the remaining chapters here.

When I first came across this phrase ‘jaarkoghaanti’, it confused me because it could give two meanings. Was the writer going to talk about the ‘neck of a ‘jaar’ (commonly available plastic drinking-water container) or about the neck of a man whose wife eloped? Later, the doubt was dispelled when the narrator began to talk about eleven-inch-long Bhojpurekhukuri with which he wanted to chop-off the head of the man who had taken away his wife, Seema.

Before I get into the analysis, let me present you with a glimpse of the chapter. Narrator himself tells his story which is linked to Taudaha and Anuj Pande who took away his wife, Seema. He recollects his past life moments with Seema. His mood is furious and so he carries a Bhojpure knife in his bag to kill Anuj but he conceals his vulnerable feelings when he is with him. He is jealous at the thought of how Anuj might have enjoyed the carnal pleasure with Seema’s lips and other body parts and how she might have let out the moans of joy and that how Anuj might have laughed at the lack of masculinity of the narrator. The name Anuj always chases him and he is trapped in the chasm—he can neither blot out the name from his heart nor can he forget the ‘torturing name’.

Let me now attempt to get into the business analysis. In the chapter ‘jaarkoghaanti’, the prominent words in terms of frequency of use appeared to be Jaar, Seemaa, and Taudaha which were used ten, eight, and six times respectively. Similarly, Nepali language is very rich in onomatopoeic words and phrases and Uprety has done justice using them abundantly. Though the chapter was just three-and-about a quarter of pages long, the following onomatopoeic words enriched the text: ‘tilikka’ (word used to describe how something is shining), ‘jhaljhali’ (vividly), ‘salakka’ (very fine, without any obstruction), ‘gadyaang-gudung’ (thunder), ‘pichikpichik’ (describes sound that comes out when you walk in your wet shoes), ‘bhalala’ (describes a sound when water flows down in large quantity), ‘gadgad’ (thunder), ‘chwaassa-chwaassa’ (describes the feeling you have when you are pricked by something pointed-sharp), and ‘lutuputu’ (describes the way somebody cuddles himself/herself). Further, another feature of this novel is use of short and crisp sentences. Few of them are as follows: ‘I don’t know myself.’ ‘It was like a war was about to break out.’ ‘The thunder got louder.’ ‘It began to get darker and darker.’ I took a sip’ and ‘I remembered the patriotic’.

From the reader-response point of view, the writer failed to convince me when he describes the qualities of a simple old man with all gray hair. ‘He had encyclopedic knowledge of birds of the air and animals of the land. He could even understand their languages. Furthermore, he could translate and interpret other creature’s languages into human language.’  This was a bit much for me. I grew up in a village which is surrounded by two creeks Jarekhola and Lapsikhola, and jungles. There came so many birds to my house but I never understood their languages. So my experience and the writer’s text didn’t harmonize.  In addition, on page three, there is one comparison which is not used in Nepali. To mean that the narrator was dripping wet, it is written ‘I had become like a fish in the pond’. For something to be wet, first of all, it has to be ‘un-wet’ before it gets wet. For example, we say ‘we are wet’ when we were ‘un-wet’ before and now due to rain or water we are wet. Moreover, we compare with mouse or cat and say ‘I’m wet like a mouse in the rain’ or ‘I’m wet like a cat in the rain’. We never say, ‘I am wet like a fish’ because it is the nature of fish to live in water since it comes to existence. So it wouldn’t give any sense to me if somebody says that the fish is wet.

Looking at the text from metaphorical point of view, it is richly embedded. ‘The cannons of the sky’ represents thunders; ‘the pond of the sky’ refers to the pregnant clouds i.e. the clouds that have contained water; ‘fire’ refers to the effect of strong locally-brewed alcohol; and ‘a knife from Bhojpur’ means a very dangerous weapon. Similarly, ‘geography’ refers to the body (of his previous wife Seema).

Lastly, the writer has rightly depicted the social phenomenon of Nepali people. America is a popular and most-sought after country for majority of Nepalis. Those who cannot make it otherwise, try filling in the form of Diversity Visa Lottery and some get opportunities to go to America. We can call it Nepali dream America. People don’t much bother about knowing what America is, what it offers and what is doesn’t. They are all positive and are ready to go there. But it is only after they get there that they find their ‘American dream’ is not what they had expected. They go through lots of troubles. Not only that, due to migration to America, a lot of families are separated and the age-old social bonds are broken. The narrator’s wife, Seema goes to America through such lottery and for her it’s like ‘out of the frying pan into the fire.’ People have suffered greatly just running after their fantasies.

So all in all, ‘jaarkoghaanti’ has a blended story of reality and fantasy with the icing of nature, animals and birds.

Welcome to 2044 where the world is on the edge of collapse and chaos, suffering from energy crisis and witnessing... Read More...

The captain of the National Debate Team, Apratim Shrivastav, says that it is his reading habit that has boosted his... Read More...

Enough is Enough is a movement for social justice
20 hours ago
‘Diplomatic note’ sent to India seeking action against dissemination of blasphemous material about Nepal, its political leadership
29 minutes ago