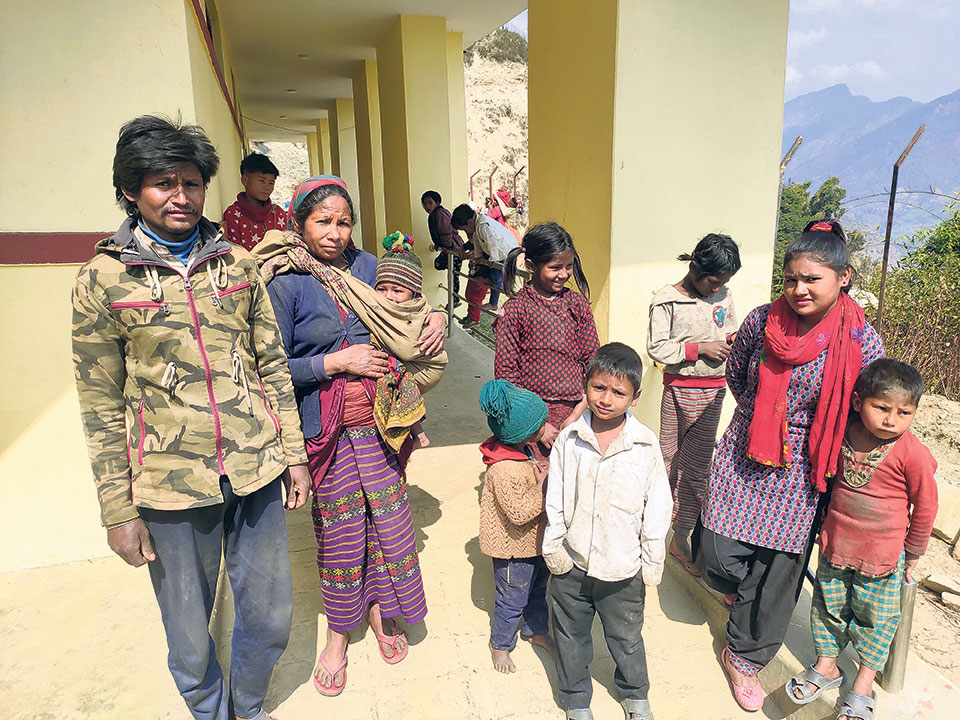 Bhansingh and Mansari Pariyar pose for a photo with some of their children. Photo: Republica

ROLPA, Feb 26: Mansari Pariyar does not know the formal names of her children. She calls them by their pet names such as Kale, Bhunti, Dauri and Dalle, among others. Her husband Bhansingh doesn't remember even the pet names, let alone the formal names which were given to his kids during some rituals. Mansari, 44, and Bhansingh, 38, have 13 children in total. They actually had 14 but one died last year.

"I was 18 when I gave birth to my first baby. After that, I delivered babies one after another. Recalling their formal names is not easy so I call them by whatever names I got used to," said Mansari. "He does not know even the pet names, he gets confused," she added referring to her husband.

In the remote village of Fagam, where this unique family lives, there are not enough schools. Hospitals and proper health facilities are far away. Most of the people are illiterate and child marriage is still quite prevalent.

According to Mansari, she had never heard of family planning until before some eight months. Neither did the couple ever discuss about how many children they wanted in their life.

"I was 18 when I delivered my first baby. Then I became pregnant in a gap of one or two years, I also had some miscarriages," Mansari reported. "I now have six daughters and seven sons. It is very hard to manage food for them," she added.

Proper diet and nutrition value are not familiar terms for Mansari. Nor did she ever go to a health post for checkup during pregnancy. At 44, she looks much older and her backbone pains unbearably. She lamented that she has not been able to provide enough food to her family members.

"My eldest daughter and two sons are already married and live in Pokhara and Baglung. Another son, who is 13 years old, has recently gone to Kathmandu to work in a brick kiln. Others are all here and I need quite a huge amount of food for them every day," said Mansari.

Bhansingh and Mansari's elder children hardly went to school. The youngest ones are not regular to school either. According to the couple, the children have been admitted to a nearby school but they go to school as they please. "They do not go to school every day. Only when they feel like going, they go," said Bhansingh, who thinks it's okay not to go to school. "We never saw a school and we are alive," he said.

"If I were aware of such methods, I would not go through so much of sufferings in life. My husband is still not happy about such family planning ideas, but now I have been injected with some medicines," Mansari stated.

The couple has continued with the ancestral occupation of tailoring and the earning is too little to manage expenses. Poverty continues to trouble the family. However, Bhansingh does not sound that guilty for having over a dozen kids. He shares the story behind it.

"My father had two wives and had 16 children from the two. Among them, 15 have died. The only surviving one is me, and I am the youngest. So it is very important to have as many children as you can make," he said. "I would not mind going for yet another child, but they have implanted something in my wife's arm," he sounds sorry.

Mansari's condition speaks volumes about the rural reproductive health scenario. Child marriage and early motherhood is very common in Rolpa and finding women with a number of children even before they reach 30 is an easy job. Amid this, the government's slogans for development and prosperity look like a farce.

KATHMANDU, Oct 23: Expressing its gratitude toward the notable progress made by Nepal in achieving the International Conference on Population... Read More...

DHADING, May 29: Nutrition, comfort, sanitation and so on are not such familiar terms for Fulmaya Chepang of Brushbang hill... Read More...