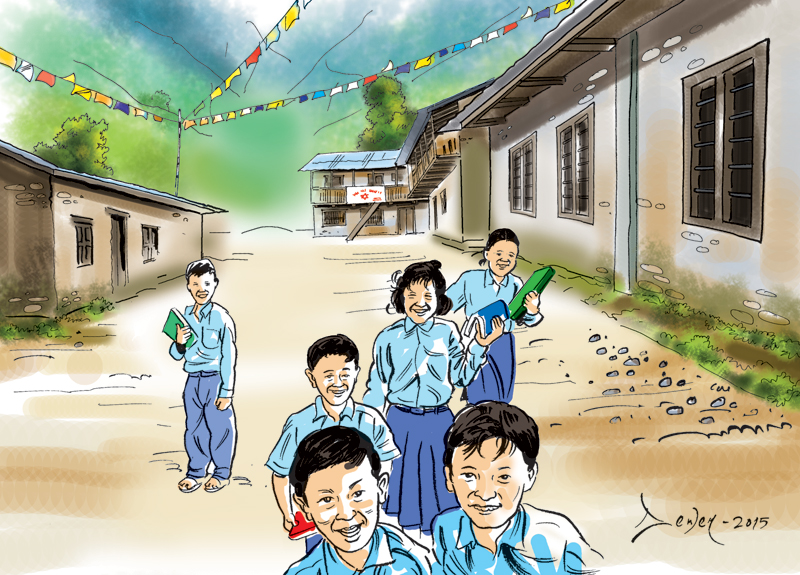 A government school in Waling, Syangja, is still in almost the same state as it was twenty five years back
“What do you feel when you see the sorry state of your first school?” Mr Tikraj Gurung, the host of the talk-show in a local channel in my hometown, asked the question that made me uncomfortable. The image of the dilapidated school ran in my mind. A feeling of nostalgia, regret and sorrow hit me together.

In the show named ‘Vyakti ra Vyaktitva’ in the local channel, Waling TV, we had started talking about my first school. A government school in Waling, in Syangja district, Shree Amilithum Primary School, is still in almost the same state that it was twenty five years back.

Sometimes, I turn a believer in the definition of the intellectual by Julien Benda, an early 20th-century philosopher. His celebrated definition of intellectuals is that they are a tiny band of super-gifted and morally endowed philosopher-kings who constitute the conscience of mankind. And as a columnist, I occasionally take the liberty of considering myself an intellectual.

The question had definitely hit my conscience.

“What is the problem? Why can’t you fix the school?” The very next day, the Philosopher King in me asked the chairman of the School Management Committee.

“Only the children from the under-privileged background study in the government school. No one from a well-to-do family studies in these schools today,” he says, confessing that his own children do not study in that school.

“The children who study in the government schools here are from really poor families, mostly the labors and daily wage workers. Almost all of them are also from the backward castes,” he had hinted at the reasons why the schools are in such a bad state. “And now, after the teachers have become permanent, we don’t have any power over them. They have simply stopped responding,” he added.

Words fall short to describe the condition of the education sector in Nepal today, specially the government schools. In many places, the school buildings were destroyed completely during the earthquake. We haven’t been able to build them all till now. We lack the required hardware. Even the software is not up to the mark. Like every other sector, politics and the work culture have ruined it internally. There is a shortage of good teachers and there is a lack of professionalism.

But the situation is not much better in the private schools either. Mr Chuda Mani Dumre, founder and executive director of Dream Vision School at Pharsatikar, near Butwal, lists six problems in the school education system. Over politicization of the sector and lack of methodical and timely updating of the curriculum are the main problems according to him.

Apart from that, he says, the teachers themselves do not respect their profession.  “Most of the teachers are either busy with politics or are expected to be involved in almost everything else other than teaching in the society. That hampers their professional output.”

Even when the organization invests in capacity building, it hardly transforms into better education for the children. He also adds lack of interest and awareness among the parents as one of the reasons.

The next day, I was at the office of the Managing Director of a private educational institute of Waling, which had begun as a ‘Boarding School’ and has grown today to a graduation level college, and has also incorporated some other technical fields. I was a silent spectator to the discussion there between the Principal and the Managing Director. It wasn’t difficult for me to sense that the only focus was on making profit.

So, that is the problem in nutshell with our school education system.

Our government schools are in hopeless condition. Our poor private schools are run as instruments of pure business.

What can be the solution?

Mr Jeebnath Devkota, from Queensland, Australia, says: “Aggressive use of the latest technology in the education sector, developing a mechanism to link career progression of teachers with performance and shifting the focus from rote learning kind of education to creativity enhancing kind of education should be the way forward.”

There is also another very important issue to be addressed. To improve our schools, we need the best and brightest people in teaching profession.

In South Korea and China, teachers are held in the same esteem as doctors. That certainly is the best way to cure the malaise.
Twitter: @dn_ktm