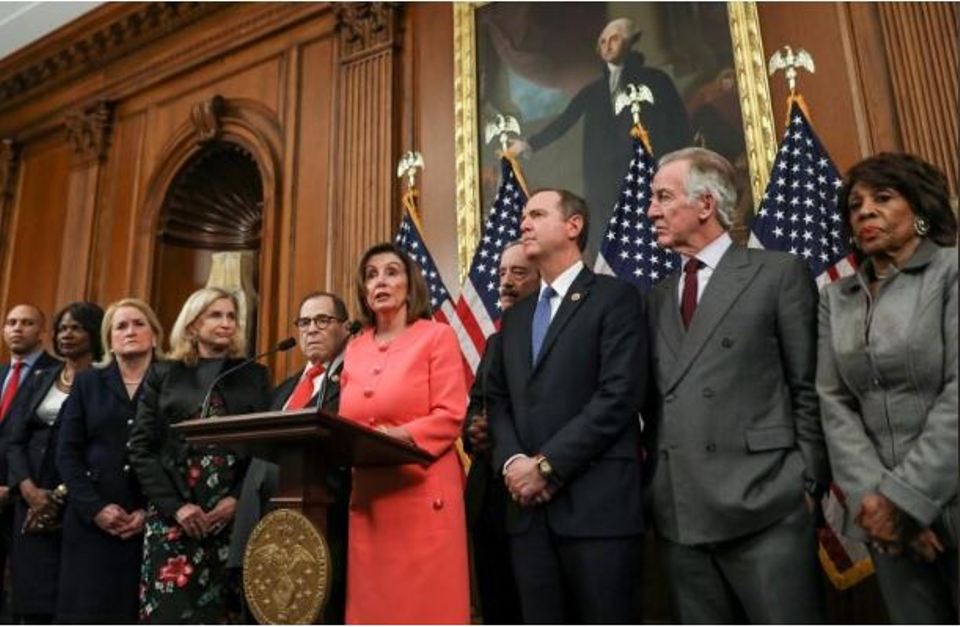 WASHINGTON, Jan 16: After weeks of rhetorical fire and fury, a handful of U.S. House members walked quietly across a hushed Capitol on Wednesday to deliver articles of impeachment to the Senate, paving the way for the trial of President Donald Trump.

Led by the House of Representatives’ sergeant at arms and the House clerk carrying the documents on a tray, seven House managers walked through a nearly empty Statuary Hall and the soaring Capitol rotunda.

More than a dozen Senate Democrats sat silently at their desks when the group arrived at the Senate. They were joined by two Republicans, Majority Leader Mitch McConnell and Senator Kevin Cramer.

A third Republican, Chuck Grassley, presided from the dais.

The House members were politely ushered to a bench at the rear of the Senate chamber, where they sat in silence as the House clerk announced the impeachment resolution had passed, and Grassley responded: “The message will be received.”

The procession took place four weeks after the Democratic-led House voted to impeach the Republican president on charges of abuse of power for asking Ukraine to investigate political rival Joe Biden and obstruction of Congress for blocking information sought by investigators.

Democratic House Speaker Nancy Pelosi and McConnell have since feuded over how to conduct the trial.

Pelosi delayed signing the impeachment articles while she waited for word from McConnell about the trial’s scope. During the delay, Democrats and Republicans squabbled over Trump’s status because he had been impeached, but had not had his trial.

Pelosi used a few dozen pens to sign, at a desk bearing a placard reading #DefendOurDemocracy. Afterward, she handed pens to the impeachment managers and committee chairs involved in the investigation.

“It makes a funny signature,” she said.

Reflecting the deep partisan divide, the House vote to impeach Trump was nearly along party lines. Many of his fellow Republicans in the Senate have made clear they view the impeachment as a political stunt by Democrats as Trump seeks re-election in the November election.

The dispute did not end when the articles were handed over.

Senate Republicans said Democrats would have to repeat the delivery on Thursday. McConnell said he had invited the House managers to exhibit the articles at noon before U.S. Chief Justice John Roberts swears in the senators.

“We will pledge to rise above petty factionalism and do justice for our institutions, for our states, and for the nation,” McConnell said in a statement.

The trial starts on Tuesday after a holiday weekend.

Province 2 named as Madhesh
20 hours ago