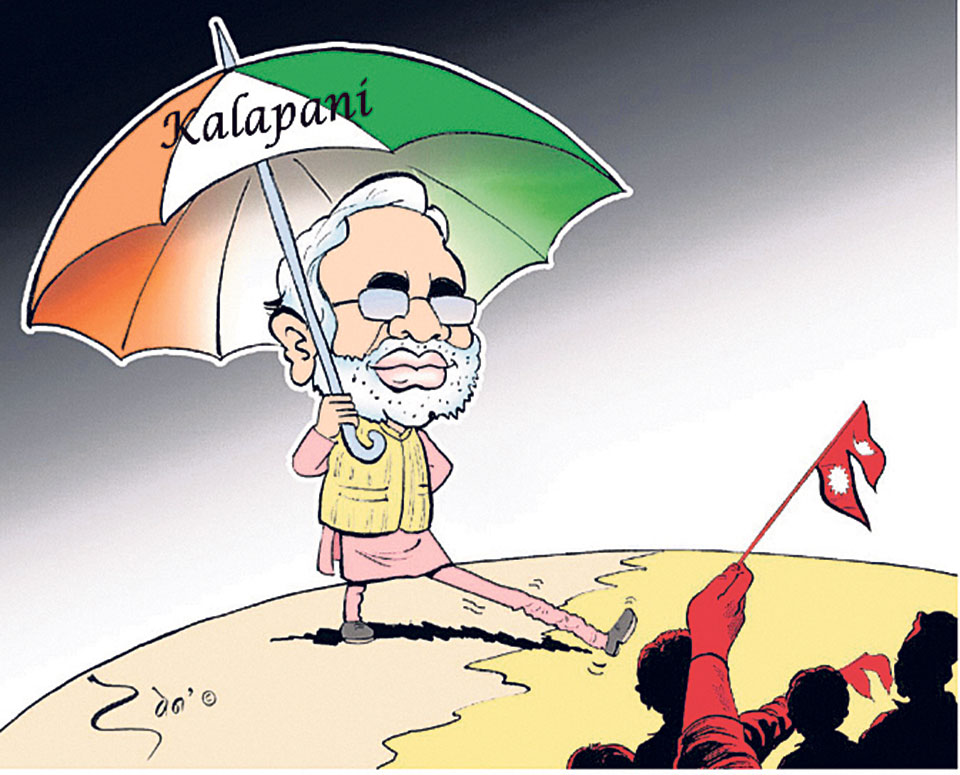 Over the past several weeks we have seen new turn of events. India restructured its internal states and published a new map that evoked widespread criticism and sparked protests all over the country. Integral parts of Nepal like Kalapani, Lipulek and Limpiadhura were shown to be a part of the Indian state of Uttrakhand.

Students, political activists and members of the civil society have been protesting against rampant misuse of our land. But have we considered how such protests will impact people-to-people relations between the two countries?

I organized numerous programs at the Reporters’ Club Nepal regarding this issue. It was overwhelming to see political parties, irrespective of their ideologies and interests, come together united as one in terms of national security and territorial integrity. There has been unanimous support for the government to solve the border dispute.

Current controversy is not new. Border dispute is as old as Nepal-India relations. Historically the original maps of areas of Kalapani were drawn making Mahakali River the main border point between the two countries. Treaty of Sugauli has clearly shown this. But India-Nepal Treaty of Peace and Friendship of 1950 does not consider Sugauli Treaty as the principle to guide Nepal-India relations. Article 8 of the treaty states that “so far as matters dealt with herein are concerned, this Treaty cancels all previous Treaties, agreements, and engagements entered into on behalf of India between the British Government and the Government of Nepal.” Yes, this does mean that Sugauli treaty is null and void, but implies that Kalapani and Lipulek are not parts of Nepal.

In this situation, the government needs to hold talks at the highest political level to resolve this issue. Prime Minister K P Sharma Oli and his Indian counterpart share a good chemistry. Both have a clear majority in the government and extensive support from the people. Mutual understanding has increased, and they have always been communicating with each other.

Modi has assured support for Nepal’s development and prosperity. Nepal must learn to take advantage of this. PM Oli should initiate a high-level diplomatic effort and initiate a dialogue to find a lasting solution to border dispute.

The need of the hour is not to hit the streets or protest outside the embassy.  We have to consider people-to-people relations between India and Nepal. Nepal has direct access to India. India formally became a part of the G8+5 which has Prime Minister Narendra Modi as the official representative. Our ultranationalism should not be a hindrance to the opportunities Nepalis are enjoying in India.

Border problems occur between the two countries but they should not be allowed to damage the cordial relations between the two countries. Effective allies and partners sit down and negotiate, understand sentiments, and provide representation trying to deal with problems from the front. Stoking unnecessary ultranationalism without consideration will have serious consequences.

The current Indian government is extremely efficient. Foreign Minister Subrahmanyam Jaishankar will be positive toward the territorial integrity of Nepal. In his recent interview with a German media Jaishankar said “we would still be investing in Nepal, Bangladesh or Sri Lanka the way we do today. South Asia is lacking regional awareness and I fault India for it, because as the largest country, it shoulders the largest responsibility. For the past five years, we have done our best to correct that mistake. The more connected South Asia is, the better it is for us too.”

Complicating relations with India with which we have unlimited access would be counterproductive. Our partnership and continued friendship which is further strengthened by the people to people relations will bring forward a future that will enable us to grow as a nation.

Let us not serve the vested interests of certain groups. India is home to over 2.9 million Nepali speaking people. Nepalis enjoy the rights to own property, have access to education, and work without prior permission in India. Disrespecting, and unilaterally trying to damage this bilateral relation will be detrimental for the future of Nepal.

There is no point in asking for resignation of Working Committee: CAN President Chand
35 minutes ago

CAN lifts Lamichhane’s suspension
2 hours ago