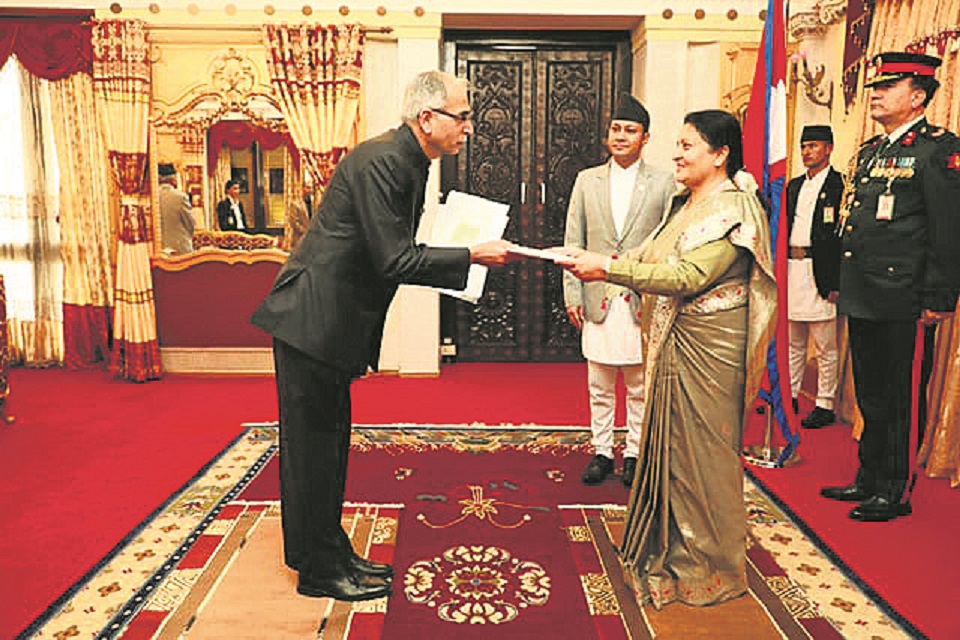 The newly appointed Indian Ambassador to Nepal, Vinay Mohan Kwatra has arrived in Kathmandu. He was leading the Indian diplomatic mission in France when the Indian government handed him the Nepal job. He boasts more than a three decade long experience in the Indian Foreign Service (IFS). He was serving as the head of Americas Division in the Foreign Ministry where he dealt with India’s relations with the United States and Canada when Prime Minister Narendra Modi came to power.

Modi inducted him to the office of the prime minister where he served as a joint secretary before he was appointed as the ambassador to France. Impressed with his profile and personality, Modi even wanted to appoint him as his private secretary.

Kwatra joined IFS in 1988 and served as Secretary in the Permanent Mission of India in Geneva until 1993, where he handled work relating to the UN specialized agencies as well as the Human Rights Commission.  During his stay in Geneva, he obtained a diploma in International Relations from the Graduate School of International Studies.

He then served as desk officer at Headquarters dealing with United Nations, and subsequently in the Diplomatic Missions in South Africa and Uzbekistan until 2003, before serving as Counselor and later as the Deputy Chief of Mission in the Embassy of India, Beijing, China for three years.
Before serving as Minister of Commerce in the Embassy of India, Washington from May 2010 to July 2013, Kwatra represented India at the SAARC Secretariat in Nepal as head of the Trade, Economy and Finance Bureau from 2006 to 2010.

His four-year stay in Nepal has given him much to have a closer look at Nepal through Indian spectacles, and although it is yet to be seen how he handles the Indian mission in Nepal, he will have a host of things to deal with.

The two neighbors have shared a positive diplomatic bond since the ancient times. Modi’s “neighborhood first policy” has prioritized connectivity through the means of transportation such as proposed 113 km Kathmandu-Raxaul Railway link.

Nepal and India need to move forward keeping in attention the need of the 21st century and the sentiments of the people of both countries. Nepal has rich natural resources with immense possibilities and India is a rising global economic powerhouse. If partnership is extended, both countries can benefit from it for a long term.

And Kwatra is the right person for this.

The outstanding contribution of former Ambassador Manjeev Singh Puri cannot be forgotten, for his successful diplomatic skills have given the India-Nepal bilateral relation to a new height.
With arrival of Kwatra, a new level of bilateral ties can be expected.

For example, Nepal is one of the major destinations for Indian tourists. Yet, Nepal has not been able to benefit as much as it should due to poor investment and infrastructure. India can fulfill Nepal’s expectation in investing in these sectors.

Modi has expressed commitment to support Nepal’s goal of Prosperous Nepal, Happy Nepali. And Modi’s one of the most trusted envoys Kwatra can play a crucial and much-needed role in Nepal’s journey toward prosperity.

Yet, some issues remain. Many past agreements are yet to be implemented.
A diplomatic effort and a political appeal is the need of the hour to bring an end to some disputes on Indo-Nepal relations. The delay in resolving some of these long-standing issues has given space to a number of unwanted elements.

Although both countries have opted for a diplomatic solution based on India-Nepal High Level Technical Committee Initiative, the delay in its implementation can be expensive for both neighbors.
Thus new Indian ambassador to Nepal has immense opportunities in terms of taking the bilateral relations to even greater heights.

One simple and cost-effective way to promote our soft power is to establish a competitive Nepal Scholarship Fund under the... Read More...