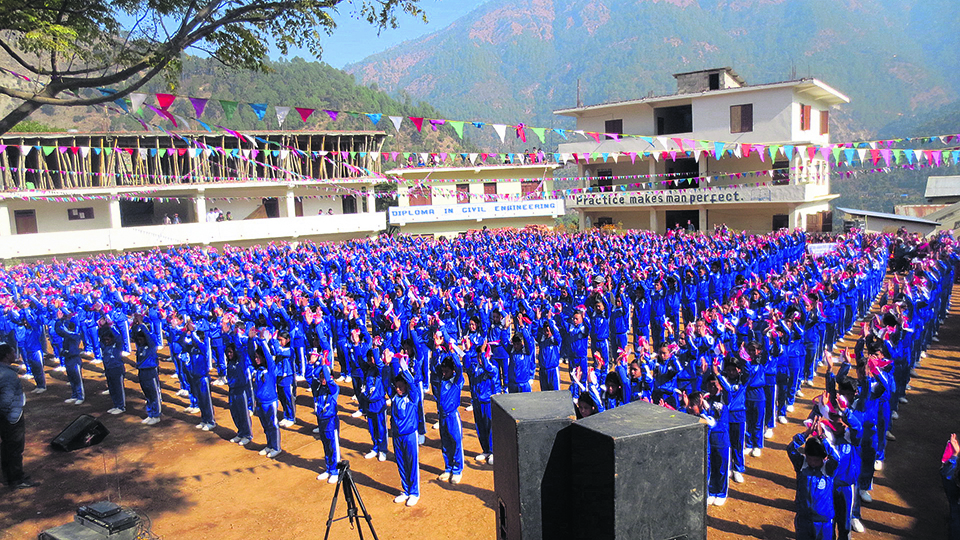 Students of a community school in Rolpa taking part in extra curricular activity in this recent photo.

Academic excellence and extra-curricular activities have helped them attract students

Following the poor performance of community schools and a negligible number of students, the government even initiated merging of many such schools.

Of late, some community schools have however been drawing headlines for a good reason. Academic excellence and extra-curricular activities have helped them attract students.

"Five dozens students came to our school from private school. We already had enough number of students, so many of them were rejected," said Madhusudan Pokharel, principal of Balkalyan Namuna Secondary School. "Our school was not much popular in the past. It's been around four years since we have impressed the locals," he added.

According to Pokharel, parents basically look for good education and extracurricular activities. He added that his school has been trying hard to excel in everything. Even with limited resources, best education and child-friendly environment is being created at the school.

All three schools' secured impressive results in the SEE last year. Even in the previous year, they had drawn the locals' attention for being 'better than the private ones'.

"Now it is the SEE results, earlier it was the SLC results, that determine the standard of any school. When they came to know that we have done quite good in SEE consistently, students started swarming in here," Pokharel said. "Similarly, the English medium is what has drawn them to us. Since the last few years, our teachers teach both in English and Nepali," he added.

The principal of Nepal Secondary School Krishna Pun stated that it is far easier to improve community schools compared to the private ones. "It is because, if we seek the community's support we get ample of it," he noted.

According to Pun, whose school is considered one of the best in the district now, the new perception is the result of the management that is comprised of local members.

"The credit goes to the guardians who have put in their hundred percent to make the school's overall management better," he said.

He then added that the government has not however extended support. If the government also puts in some effort, his school can be one of the best in the entire region, he claimed.

"We can give the best result if the government supports us in infrastructure development. We cannot build modern infrastructures on our own," he said. "Similarly, many community schools in Rolpa face human resource crunch. We are not in a very comfortable position either regarding the number of teachers," he added.

Community schools in Rolpa have long demanded additional quotas for teachers. However, the concerned ministry has not given attention to the demand, according to Mahesh Neupane, president of the management committee of Balkalyan Namuna Secondary School. "Some schools have shown exemplary results and have been successful in drawing students even from private schools. But in general, community schools are still deprived of resources, both human resource and funds," he remarked, adding, "We have not noticed local representatives taking interest in education, the local government is still apathetic towards this sector."

Once underdeveloped, Rolpa on the path to prosperity

ROLPA, April 14: Until a decade ago, access to the road network was a dream for Rolpa residents. The district has... Read More...