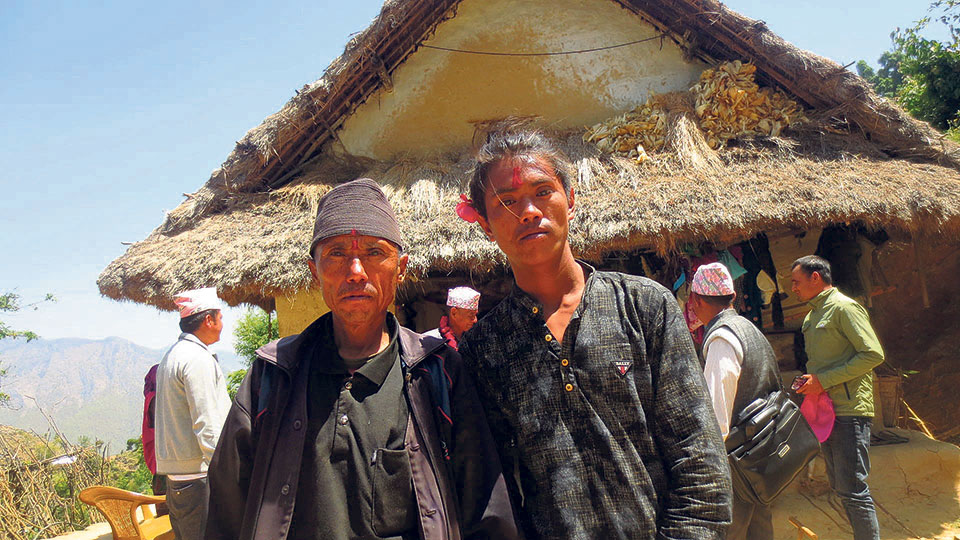 Pratap Singh Gharti (right) and his father Kharbir at their home in Rolpa on Saturday. Dinesh Subedi/Republica

ROLPA, May 1: Pratap Singh Gharti, a seven-year-old in Rolpa, lost his way 17 years ago during the Maoist armed insurgency. He finally made it back home Saturday.

His sister had joined the rebels. At home, there were just the two of them as their father was in the Indian army and the mother had left with another man.

“We were four siblings. But I do not remember where my brothers were,” said Gharti.
One day, the sister took him along, but they soon became separated. “They told me she was killed in action,” he recalled.

After that his days of hardship began. He was too young to take up arms and there was nobody to care for him. Sometimes they would torture him.

He vaguely remembers being called ‘Kale’ by local villagers. But he had little idea about family and identity. “I knew my home was in a place called Rolpa and they would call me Kale. I was too young to remember or understand anything more,” he said.

He was left to his own devices for long. On many days he went hungry and slept in the open. Later, he started washing dishes at tea shops and eateries. “I spent many days sheltering at school buildings or sleeping in the open. I often had nothing to eat.”

He later scrounged some money doing day labor. But he used up that also trying to find his way back home. “They would pay me a pittance, and although I managed to save a little, it wasn’t enough to find my way back,” he said.

When he fell ill, the days felt like decades. There was no one to turn to for help. He also had to undergo surgery for appendicitis. He found work in different places including in towns across the Indian border.

It was when he was working for the Chaudhari Group in Bajhang that he somehow managed to make a homeward connection. With the help of fellow workers, he finally reached the family address.

“I am very happy to find my family,” he exclaims.
After listening to his story, Barka Bahadur Rokaya, chairperson of Khaptad Chhanna Rural Municipality in Bajhang, helped him reach home.

“His friends always noticed how sad he was. They wanted to help,” said Rokaya. “With the cooperation of some local journalists we were able to make his homecoming happen,” he added.

Father overjoyed at son’s return
The family was also overjoyed. According to Kharbir Gharti, Pratap’s father who welcomed him Saturday, it was a miracle.

“I had presumed him to be dead. Many people died in the Maoist armed insurgency and I presumed he had gotten killed also,” said Gharti senior.

Crediting God for the son’s return, Kharbir said he used to pray for this to happen. He observed that his son has become a young man and would probably take care of his ‘old father’.

Kharbir also said his daughter had not gotten killed as reported. “She, however, does not wish to meet us and I have heard she has a husband.”

His other two sons are also doing fine. “One lives abroad, the other is in Pokhara,” Kharbir said.
There are no exact figures on how many in Rolpa had to go through the kind of experience that Pratap underwent. Altogether 33 Rolpa locals are listed as disappeared or missing.

When sick, Gairigaun locals go to church instead of hospital

ROLPA, Aug 24: Bimala Pun, 20, is not celebrating Teej this year. Actually, it’s been five years since the  Garigaun... Read More...

ROLPA, March 27: Doctors in Rolpa are facing a self induced medical crisis that has risked countless lives. ... Read More...

Local administrations in Kathmandu Valley decide to lift odd-even rule for buses, microbuses and tempos
12 hours ago
Govt warns of action against those posting photos, videos in social media platforms without consent
22 hours ago

Govt, ASDP and NACCFL sign deal for capacity building of cooperatives in Karnali
14 hours ago