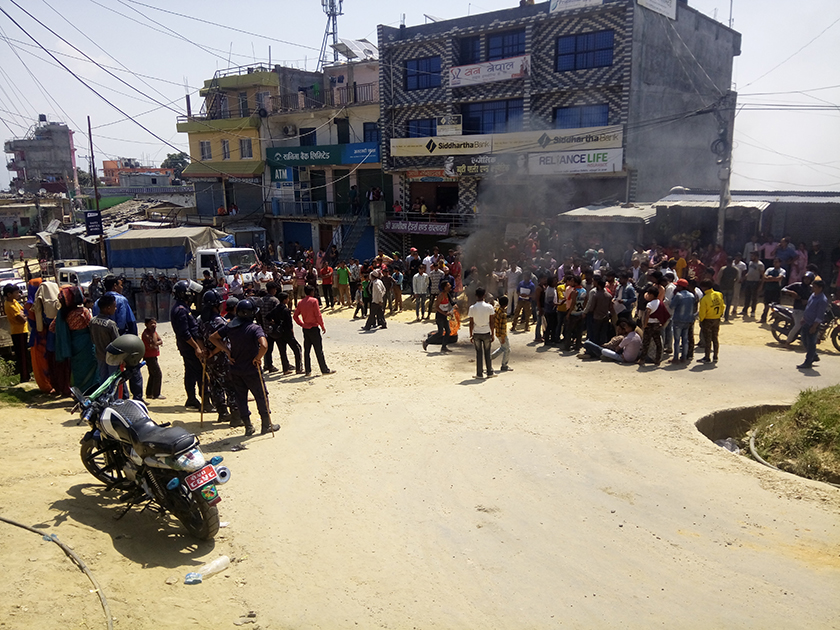 Gita Tamrakar, 26, of Amargadhi municipality, who gave birth to a child at the hospital through surgery 14 days ago, passed away on Friday.

The enraged family members, relatives, and locals picketed the hospital and chanted slogans arguing that Gita died due to sheer negligence on the part of doctors of the hospital. However, the hospital administration has denied the charge saying that she was given 12 pints of blood during the treatment.

"Unexpectedly, we failed to save her life despite our sincere efforts," a source at the hospital said.

The source said that she was referred to other hospitals as her situation was worsening. Gita was admitted to hospital following excessive bleeding on Friday.

The protestors picketed the District Administration Office while blocked the main road of the district headquarters. As part of their protest, local youths burnt tyres at Tufandanda Chowk.

Deputy Superintendent of Police, Dambar Bahadur KC said that the District Police Office has launched an investigation into the case. "Those found guilty in this incident will face action in line with existing laws," he said.

Local authorities held a meeting with the victim's family members on Friday night over the incident. A three-point agreement was reached on Saturday morning.

Chairman of the District Coordination Committee Ganesh Bhatta said that a ministerial-level committee will be formed to probe the incident, provide relief and compensation to the victim family, save the life of the minor.

The situation has not been normalized even after the agreement with the victim family.

Foot only the bills of VIPs who can't afford treatment, govt told

KATHMANDU, Sept 15: Following widespread criticisms over the trend of VVIPs and VIPs going to foreign countries for medical treatment on... Read More...