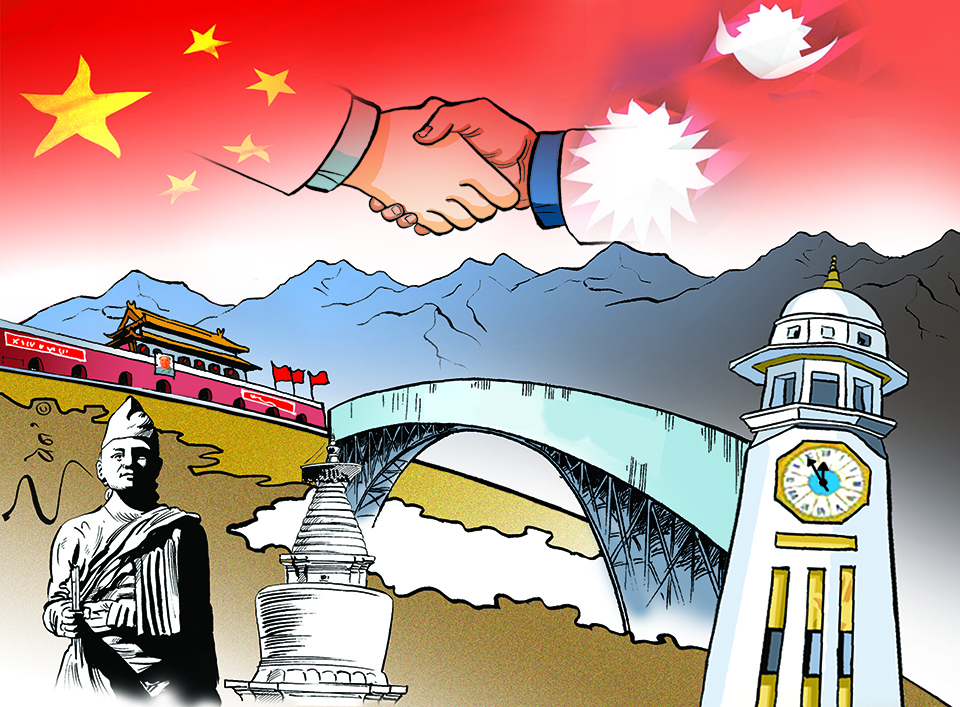 It would not be pragmatic for Nepal to expect BRI projects to be built entirely on Chinese grants. Nepal can expect more grants and less loans but not absolute grants

All is not so well with the world and Asia at the moment. Current US-China trade war is raising questions about China-US relation, Asia’s relation with China and vice-versa and future of Belt and Road Initiative (BRI). And attempts are being made to show China responsible for what is happening. It’s not so. The trade dispute is not making of China. It all started in 2017 with administration of Donald Trump deciding to go for dispute with China. China never described this dispute as ‘trade war.’ It was America which called it so and China started to react only after America started taking one after other step against China.

Trade deficit with China has been cited as one of the major reasons for trade war. But that’s not the whole story. It is normal for countries to have trade deficit with each other because even though China has surplus over US with nearly 350 billion in terms of trade it is the result of international division of labor.  Trump administration claimed this is not fair and that the US is losing and China is gaining so much. But they ignored the fact that current imbalance is result of division of labor—in which China stands at the low end and the US at the high end.

Every country has some comparative advantages. China has these advantages in manufacturing industries, availability of labors and resources.  And we produce valuable goods at reasonable prices. The US is getting to benefit from it too but it is ignoring even this simple fact.

As the trade war is escalating, it is surely going to impact global economy but China will have no role to play in this because China did not start the trade war. It was the US which initiated it and which is hardening the position. China is only responding to US highhandedness. At the heart of this trade war is the question of equality. China wants the US to regard it as equal partner with dignity. Business partners should be treated with equality and respect. But the US does not seem willing to do so.

We see that countries are also asking if the trade war will have its bearing on BRI and its partner countries.  It is surely going to impact but not to a large degree. For one, BRI is basically a cooperation agreement between China and developing and least developing countries.  And the US is not involved in BRI.  But as things stand, the US and its allies are very much into this process of discrediting BRI through false stories of debt trap.  They have been repeatedly travelling to BRI countries like Nepal and trying to persuade them not to proceed with BRI projects. We see this happening in Nepal with frequency.  Even top US officials visiting Kathmandu have started to spread this propaganda.

They cite the case of Sri Lanka’s Hambantota port to prove their point. But Sri Lanka is absolutely a wrong story. According to the 2018 data, the total debt of Sri Lanka is about 57 billion US dollars and Chinese debt accounts for only eight billion of this, which means only 14 percent. As a matter of fact, Sri Lanka has the largest debt with Japan, which is the largest investor in some of BRI countries.  Let facts tell the truth. Let us not be guided by fiction. The debt trap is an over-exaggerated story they are using as a weapon to discredit China. Some Western countries established their dominance in African and Asian continents by colonizing many of the countries for years. Now that China is reaching out to these countries with package of development—mark that China’s is no political mission—some Western countries feel nervous about it.  When China is investing in developing and least developed countries, the US and some Western countries are trying to prevent it by evoking false narrative of debt trap. The trade war is going to affect these countries too because it will restrict import and export and erode people’s purchasing power.

The US dominated Indian and Pacific oceans after the Second World War.   It has remained one of the top priorities of the US defense policy to protect its strategic interests in Asia and Pacific. But Indo-Pacific Strategy is clearly seen directed toward checking the rise of China and, to some extent, India.  So far, India has not shown much interest in Indo-Pacific Strategy though it has not officially rejected it. Thus countries like Nepal might be taking a big risk, if they officially jump into Indo-Pacific bandwagon without considering possible repercussions.

China would not be alarmed if Indo-Pacific Strategy was about commerce, business and connectivity (like BRI is), but this is evidently a containment policy. If India rises to the position of power, the US might do the same to India as it is trying to do to China at the moment. Countries in Indo-Pacific region need to watch American move carefully.

China, as the second largest economy, contains nearly 63 percent of US GDP capacity. Most Chinese companies have capacities and willingness to go abroad for investment and doing business. But through Indo-Pacific Strategy the US wants to build an alliance with Japan, India and Australia to contain increasing presence of China in Indo-Pacific region.  China won’t just stay back and watch. As the second largest economy, China also has so many overseas interests to protect along the Indo-Pacific route, just like the US has its own overseas interests to protect.  America is clearly showing a double standard here. It wants its overseas interests to be protected but it does not want to see China doing the same.  As the largest economy, the US has more than 500 overseas military bases, big or small.  As the second largest economy, China could also have around 300 military bases. But so far, China has only one logistic base in Djibouti in South Africa to protect its overseas projects. Yet the US is making hue and cry about it.

Despite trade war and efforts from various sides to undermine China, Nepal and China have found ways to expand their cooperation in multiple areas.  Nepali President Bidya Devi Bhandari visited China to participate in the Second BRI Forum in April and during her visit important deals on BRI projects and trade and transit protocols have been signed. This is the milestone development in Nepal-China relations.

At the same time, Nepal-China exchanges have increased over the last few years. There have been official visits from both sides and academic and people-to-people exchanges are increasing. So many Nepali students are studying in China. More than 400 Nepali students have graduated from our university so far.  And we still have more than 100 Nepali students pursuing degrees in our university. It is so with many universities in China. The number of Chinese tourists visiting Nepal has sharply increased.  This is the proof of growing engagement between China and Nepal.

Apparently, the debate in Nepal is not whether railway and roadway under BRI should be built but whether they should be built on Chinese loan or grants.  This debate seems to be a bit misguided.   According to the common practice observed in international projects—including those sponsored and funded by World Bank, IMF, ADB or AIIB—projects are run based on the principle of market.  Though BRI is a China-proposed initiative, it has found international consensus (that US has not acceded to it does not mean it has not found international recognition for more than 150 countries of the world have joined the BRI bandwagon). The BRI is very much a market-driven project and there are certain principles, mainly related to investment and returns, which guide BRI projects. Investors, wherever they invest, expect reasonable returns.  Without expectations for returns, there would be no incentive to invest. China and Nepal should also consider investment and return factors.

It would not be pragmatic for Nepal to expect BRI projects to be built entirely on Chinese grants. Nepal can expect more grants and less loans but not absolute grants.  The key point is how the two countries can mutually benefit from BRI projects.

The cross-border railway is very important for Nepal for diversifying its trade and transit to third countries.  Trade diversification is always good for any country. BRI projects provide this opportunity for Nepal.  Economically weak Nepal can become the golden link between two rising economies of China and India.  Nepal should be able to see the best benefits it can have from China and India.  These are the favorable times for Nepal to work in this direction.

China and Nepal have remained friends in need and friends indeed for years. As China is reaching out to the world through BRI, Nepal has the opportunity to capitalize on it and become prosperous, together with China.

There is no garbage in Dharan: Mayor Sampang
16 hours ago

Deepak Raj Giri's satire on Balen-Sampang war of words: ‘If you break your sticks, what will you get support from?’
14 hours ago
Nepal requests Indians investors to invest in Nepal
17 hours ago

The story of a road track which could not be opened even in four decades !
12 hours ago

JSP makes massive changes in responsibilities of leaders
13 hours ago

Deepak Raj Giri's satire on Balen-Sampang war of words: ‘If you break your sticks, what will you get support from?’
14 hours ago