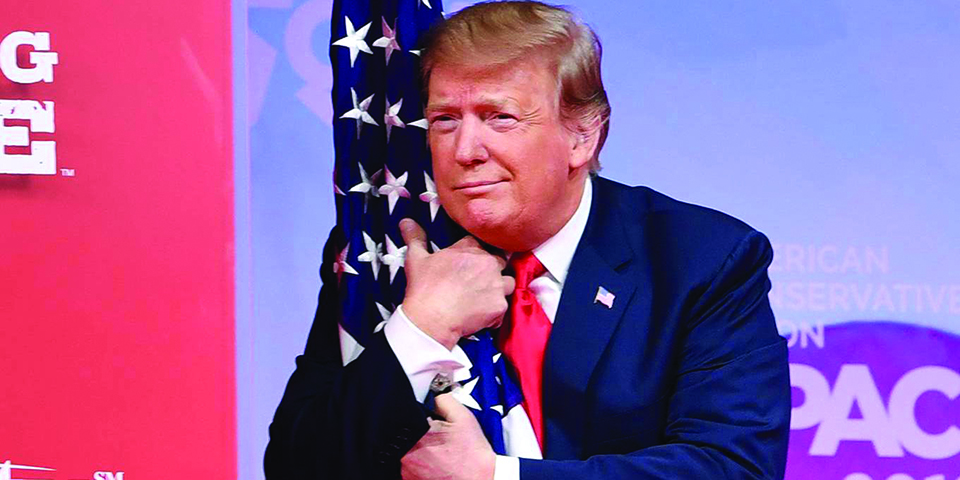 In 2016, Trump promised Americans that he would negotiate so many great deals on their behalf that they would get “tired of winning.” Now Americans are probably growing quite tired

WASHINGTON, DC – Not content with its trade war against China, US President Donald Trump’s administration has also opened bilateral trade negotiations with Japan. Yet whatever Trump hopes to achieve with Japan, it will be far less than what he threw away when he abandoned the Trans-Pacific Partnership (TPP) in early 2017.

During the 2016 US presidential campaign, Trump promised Americans that he would negotiate so many great deals on their behalf that they would get “tired of winning.” Now that he has imposed heavy costs on US farmers, consumers, and the overall economy through tariffs on Chinese imports, Americans are probably growing quite tired indeed.

Trump’s withdrawal from the TPP is the canonical example of his trade-policy recklessness. Signed in 2016 by the United States and 11 other Pacific Rim countries, the treaty would have governed around 40 percent of all trade covered by World Trade Organization rules. It was a “twenty-first-century agreement” that included not just tariff reductions, but also provisions to liberalize retail, communications, entertainment, and financial services. It would have strengthened labor and environmental standards, established a new dispute-resolution mechanism, and created a framework for managing e-commerce, cyber security, intellectual-property rights, data mobility, and more.

When the US withdrew from the TPP, many assumed the agreement was dead. But the remaining signatories, led by Japanese Prime Minister Shinzo Abe, quickly agreed on a replacement, the Comprehensive and Progressive Agreement for Trans-Pacific Partnership (CPTPP), which retains around 200 of the TPP’s 220-odd provisions. The 20 that were left out were those for which the US pushed, and can be reinstated should the country wish to join the pact at a later date.

Now that the CPTPP has entered into force, Australia, Brunei, Canada, Chile, Japan, Malaysia, Mexico, New Zealand, Peru, Singapore, and Vietnam enjoy preferential access to each other’s markets. As tariffs are phased out, US suppliers in those markets are finding themselves at a growing disadvantage. While the Japanese tariff on American beef imports has remained at 38.5 percent, the levy on beef from fellow CPTPP countries has fallen to 27.5 percent and eventually will reach just nine percent. As a result, American beef (and wheat) entering Japan (or any other CPTPP country) now face a higher tariff than beef and wheat from Australia, Canada, or New Zealand.

Still, Abe has worked hard to maintain good relations with the US, taking much political heat at home for it. Japan was one of the few US trading partners not to retaliate when the Trump administration imposed tariffs on steel and aluminum. And while affirming Japan’s preference for regional and multilateral arrangements, Abe has nonetheless agreed to bilateral bargaining with the US.

With a Japanese parliamentary election coming this summer, bilateral talks aren’t likely to go anywhere until later in the year. When they do happen, Japan will benefit from having already entered into a free-trade agreement (FTA) with the European Union. As of this past February, more than 90 percent (soon to be 97 percent) of EU exports to Japan are duty-free; and, after a brief phase-out period, the same will apply to 85 percent of agri-food products. While wine from the US faces a 15 percent tariff, wine from the EU—as well as from CPTPP countries such as Chile—now enters Japan duty-free, as do European cars, which are subject to common safety standards. Not for nothing did Abe tout the EU deal as proof of “the unshaken political will of Japan and the EU to lead the world as the champions of free trade at a time when protectionism has spread.”

For its part, the Trump administration wants Japan to remove barriers to US agricultural and auto exports and reduce its bilateral trade surplus, which stood at $58 billion (in goods) in 2018. But while Trump often complains that US goods face trade discrimination in Japan, he has only himself to blame. It is only natural that US exporters would lose market share to their counterparts in Europe and the CPTPP countries. With Japan’s new FTAs in place, the US trade deficit with Japan is likely to grow even wider.

So much for Trump’s “art of the deal.” The supposedly brilliant negotiator has left US exporters at a severe disadvantage in markets spanning the Pacific Rim and Europe. Worse, China is now pushing for a mega-FTA among 16 countries under the Regional Comprehensive Economic Partnership (RCEP), negotiations for which are ongoing (although many China experts do not expect an agreement to be reached anytime soon).

Here, it is worth remembering that the TPP would have excluded China and locked in a US-led trade bloc in Asia for the long term. No deal that the Trump administration makes with Japan can possibly make up for what the US would have had under the TPP. At best, the US will salvage the TPP terms concerning Japan alone, rather than all 11 original signatories. Though Abe has declared his willingness to negotiate bilaterally with Trump, he cannot possibly grant the US better terms than those given to Japan’s CPTPP partners.

We’ve seen this movie before. With each Trumpian “negotiation,” the US issues its demands, offers little in return, and threatens “punishment” through tariffs if it doesn’t get its way. Like the thief who says “your money or your life,” there is no actual negotiation to speak of. By acting like an insecure bully, Trump has left the US increasingly isolated in the global economy. American producers and consumers are already paying the price. The only question is how much more “winning” they are willing to bear.