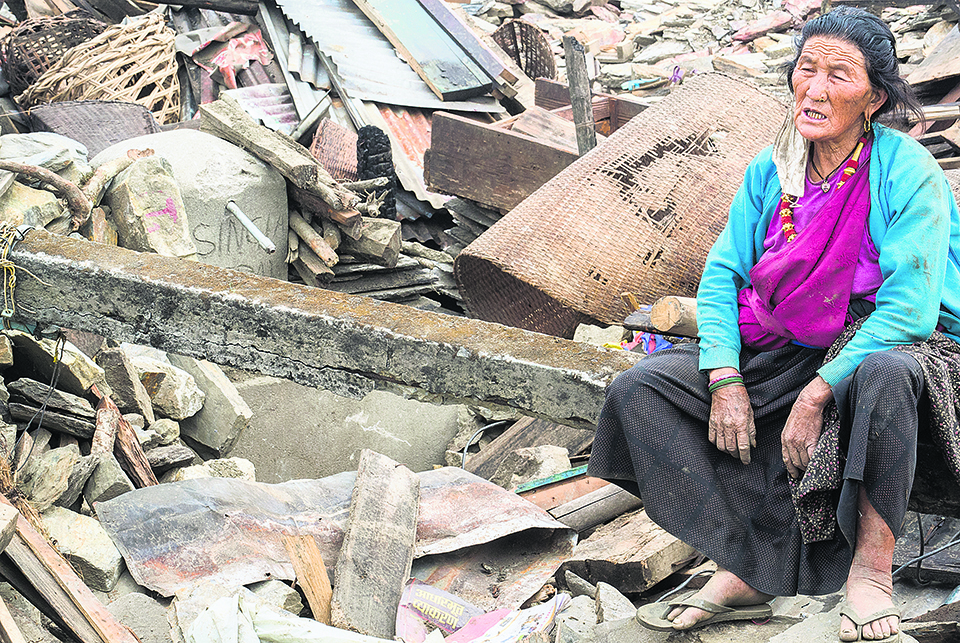 Barpak, in the northern part of Gorkha, was a once quaint little place. The roofs of the 1200 odd houses were built from the same stones that were used to construct pavements across the village. The houses matched the traditional stone taps that dotted the landscape. It was the largest integrated settlement in Nepal, complete with access to good roads and electricity. In the year 2000, it was even given the status of a model village by the government.

Because the houses were similar in structure, there was no discrimination and disparity among the rich and the poor. The villagers lived in peace and harmony. The Gurungs and Ghales lived in their own world while the Dalits lived in the low-lying areas of the village. The Kot Danda at the top of the village served as the place where people gathered for Dashain. During various other festivals too, people came in thousands for there was a temple there. Ask a villager something and you were in for a surprise – they often responded by singing.

In 2007 when musician Shalil Subedi asked nonagenarian Manasubi Ghale how the village was during her childhood, she had answered, “There were no windows in our spiralling houses and there was certainty in a Laure’s word.” Ghale said that there were small houses built of stones in the village 90 years ago. Barpak had been compared to Darjeeling since then as dozens of boys from the village were enlisted in the British Gurkha. When the soldiers returned home, they built their own houses that were different from the traditional settlement.

Ghale claimed that the originality of the houses has been affected by the reconstruction following the 1933 mega earthquake. “No one built spiralling houses after the earthquake,” she said, “Rich people and the ex-British Gurkhas built houses with stone roofs instead.” This, apparently, gave rise to the trend of building pavements, courtyards, and roofs from stones. And it was this tradition that was followed by generations until Barpak became the largest integrated settlement in the nation.

As a result, nobody wanted to actually cut ties with Barpak even though they relocated to other places. Yam Bahadur Ghale had moved to Manang for work in 1990 but he held on to his ancestral home. The house served as a venue where his family and extended relatives would gather during various festivals.

Similarly, Durga Ghale started living in Barpak after retiring from the British Gurkha and started his own sheep farming business in the village. “The number of people returning to the village with new experiences and the desire to do something in their own hometown was astounding,” he reminisced.

Today, except the Bauda Himal that looks over the village, nothing is the same. When the earthquakes struck in Barpak in 2015, all the stone houses in the village were reduced to rubbles. Along with the massive destruction, the disaster claimed the lives of 72 people and crushed the spirit of those left behind.

Kyurakali Ghale remembers showing her grandsons the pile of rubble that was once her home. She told them, “This is where you were born. This is where you played.” Her grandsons had returned from Japan and so shaken and moved there were by this incident that they decided to stay back.
Pur Bahadur Ghale, who had pledged to conserve the traditional game of Fusre, died in the earthquake. His corpse was found 11 days after the earthquake. Tragedy befell the families and there was death and destruction at every turn. Manasubi Ghale says that, in addition to the lives lost, the villagers lost their pride too when they received sub standard relief materials and donations from various parts of the country, through various groups and organizations. They had never felt so inferior and looked down upon, says Ghale.

Then, to add insult to injury, President Bidya Devi Bhandari reached Barpak on the occasion of the first National Earthquake Day. She, however, returned without a word to the villagers after inaugurating a newly reconstructed house. This came as another blow to Barpak inhabitants who were looking for some form of comfort from their head of state. “That incident taught us to never place our hopes on others,” said Jit Bahadur Ghale.

And it is so that the residents of Barpak have now learnt to give one another hope. On the same day as the president’s visit, a radio station was set up in Barpak. A cultural program was held in the evening. The villagers sang and recited traditional and touching songs and poems during the program. The songs and poems were about loss but they were also about strength and resurrection.

Today, there are tins roofs instead of stone ones and the houses don’t hold stories or remind the residents of anything and bring back fond memories. Suffice to say, nothing is the same but the spirit with which the people of Barpak have been taking things in their stride is nothing short of exemplary. Fours year after the earthquake, they are still rebuilding their lives and even though tremors continue to remind them of the calamity that changed everything, one thing is for sure: They sure aren’t losing hope.

KATHMANDU, April 25: The sixth memorial day of the Gorkha Earthquake that occurred six years ago is being observed on... Read More...