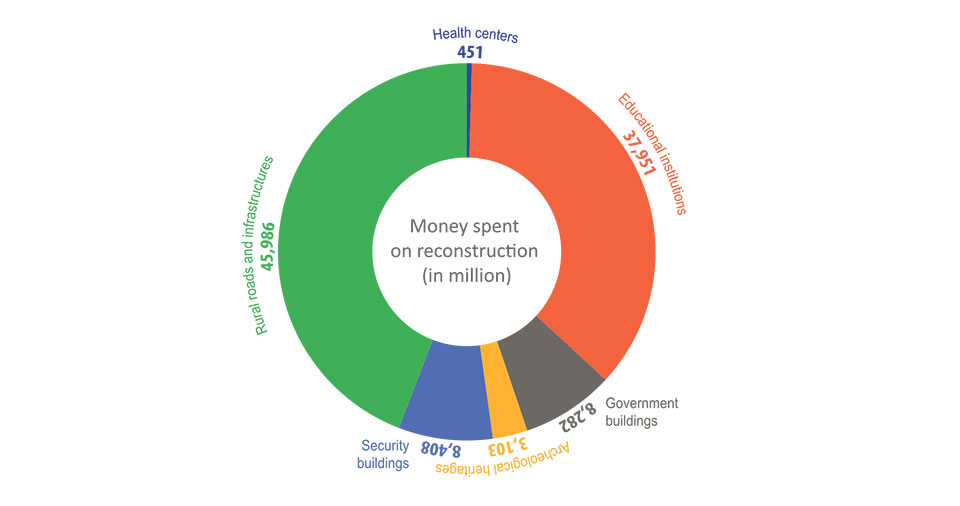 KATHMANDU, Aug 5: A total of Rs 276.3 billion has been spent on post-earthquake reconstruction that includes government buildings, educational institutions, health centers and archeological heritages, among others.

Of which, Rs 175.52 billion has been sourced from the government whereas Rs 100.78 billion and Rs 40.23 billion have been sourced from bilateral spending as loans and from donor agencies and other different non-governmental organizations, respectively, said Manohar Ghimire, deputy spokesperson at the National Reconstruction Authority (NRA).

The NRA has completed the reconstruction of 70 government/public buildings—30 with government funds and 40 from the assistance of the Asian Development Bank (ADB). According to the authority, work on the remaining 21 government buildings that are being restored with government assistance and 29 through financial assistance from the ADB will be complete by December.

Similarly, the NRA has completed reconstruction of 165 security buildings and work on 52 is ongoing.

The NRA is doing its homework for the reconstruction of prisons in Gorkha, Sindhupalchowk, Lamjung, Rasuwa, Okhaldhunga and Solukhumbu districts with loan assistance from the Export-Import Bank of India. The retrofitting of SAARC Secretariat has been completed.

Likewise, the NRA has published a tender notice for the reconstruction of buildings of Nepal Children’s Organization, Keshar Mahal and the Central Library, Kirtipur. The office of the president (Shital Niwas), Bahadur Bhawan and Tri-Chandra Campus buildings are in the phase of retrofitting, according to the NRA.

A total of Rs 156 billion budget has been allocated by the authority for the fiscal year- 2019/20 to expedite reconstruction and rehabilitation of the displaced and damaged structures across Nepal.

The devastating earthquake in 2015 killed around 9,000 people.

Meanwhile, the NRA issuing a separate statement on Sunday, has said that reconstruction of over 424,000 houses that were destroyed by the 2015 earthquakes has been completed while other 214,000 houses are under construction.

“The number of completed and under-construction buildings combined comprises 83 percent of the total buildings that needed reconstruction,” it said.

A total of 773,447 house owners had signed up the grant agreement with the NRA to reconstruct their houses.

The landless squatters are yet to begin reconstructing their houses owing to financial crunch ... Read More...

Sindhupalchowk to wrap up reconstruction soon

SINDHUPALCHOWK, Feb 12: With the reconstruction of almost 57,000 houses and many more in the process, Sindhupalchowk, one of the most-affected... Read More...

Taleju Bhavani Temple opened for a day
52 minutes ago