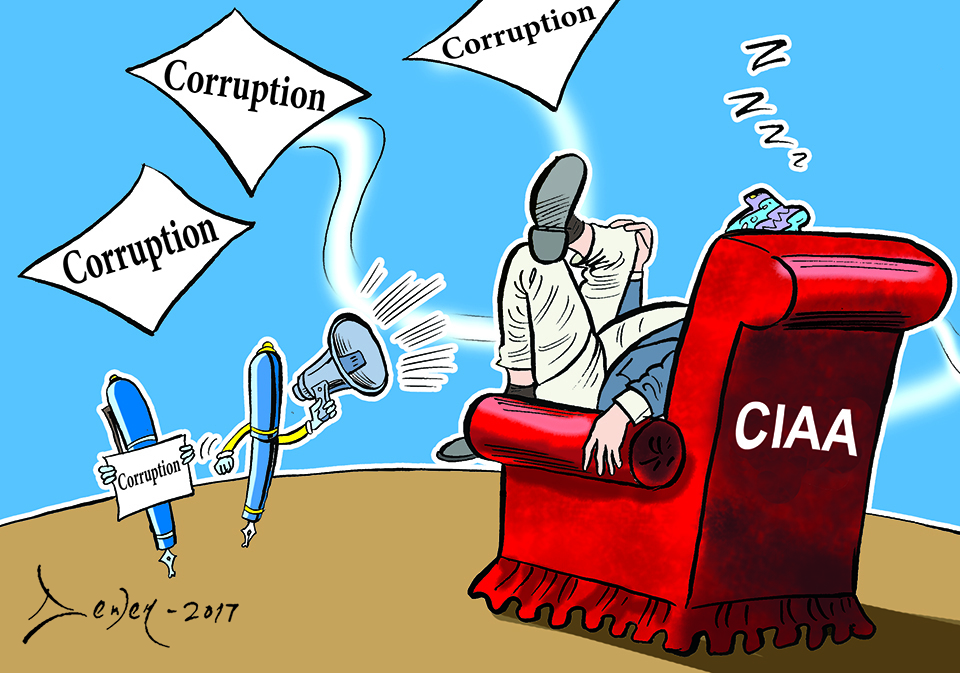 If Prime Minister Oli wants to make the country prosperous on the foundation of corruption and misrule, he will surely fail

An eminent British historian Lord Acton once said “Power corrupts; but absolute power corrupts absolutely” in response to the absolute power held by the contemporary politicians. This theory leads to extreme pessimism and a radical scepticism in politics. An Irish dramatist, critic and political activist, George Bernard Shah, came up with different thought. He said “Power does not corrupt; fools, however, if they get into a position of power, corrupt power.” This holds true to power and corruption in Nepal.

American sociologist C Wright Mills introduced the concept of ‘power elite’ in 1956 to understand the structure and distribution of power in American society. He asserted three firmly interlocked prongs of power: the military, corporate, and political elite to rule over the masses of people who are unorganised and virtually powerless and controlled and manipulated by the groups.  Control and manipulation create a gap between powerful and powerless. The basic characteristic of this theory is that power is concentrated, the elites are unified and the non-elites are diverse and powerless. Sixty three years after Mills formulated this theory its echoes are still reverberating in our society.

Restoration of multiparty democratic system in 1990 and declaration federal republic in 2015 brought scope of expectations. But key political affairs of the country remain the same or even worse than during Panchayat—which was run by few power elite who control, influence and manipulate political affairs for private gains.

If we look at every single party’s manifesto, we can find that their prime concern is to put an end to corruption to create a just and free society. But when the leaders of these parties reach public position they start to plunder public resources for personal ends. It is dismaying that even the officials of anti-corruption body are involved in this plunder. All the parties maintain a mysterious silence on corruption cases. The recent wide-body Airbus scam is a case in point. No one is ready to book the culprits of this case. Instead of making the corrupt accountable, the leaders are trying their best to proving the minister innocent and putting the onus only on bureaucracy. How could it be possible without the involvement of ministers in such a high-profile corruption case? The corruption on leasing of the Boeing 767 Lauda aircraft was one of the heated issues associated with the late Prime Minister Girija Prasad Koirala. Tarani Dutta Chataut, then minister of Tourism and Civil Aviation in the Koirala cabinet, resigned to pave the way for fair investigation. But nothing came out of it.

The investigation of 33-kilogram gold smuggling and murder has ended up with no result. Now, it is almost forgotten. Neither the ruling coalition nor opposition parties have taken up this case seriously. They are all silent. From Sajha Prakashan irregularity of Rs 300 million to Nepal Oil Corporation’s land purchase deal or Nepal Telecom’s 4G expansion plan, leaders have tried to protect the corrupt. The ever-biggest corruption scandal in Tax Settlement Commission (TAC) brought fort connection among corporates, bureaucrats and leaders. Another high profile MBBS question paper leak scam surfaced but KP Sharma Oli (then Chairperson of CPN-UML) and Nepali Congress president Sher Bahadur Deuba allegedly pressured the CIAA not to take up the case. It shows the horrendous nexus between educational mafias and political leaders.

Commission culture is rampant. Commission between 15 to 50 percent is common on purchasing supplies, payments of bills, passing bills, issuing cheques, settlements of disputes and so on. People say that out of total cost sanctioned for the project, only 30 percent goes to the contractor and the big chunk of 40 percent goes into the pocket of various ministers and police officers. This is how corruption is getting institutionalised in Nepal. Prime Minister of Malta, Joseph Muscat rightly said “who does not fight corruption when in power, will himself be corrupt”.

Nepotism and cronyism are chronic disease of Nepali politics. It has crippled Nepali culture in such a way that merit and qualifications have largely been abandoned. Nowadays, it is very hard to get a job unless you have someone powerful in politics. Many qualified people, who are away from money, power and politics are forced to leave the country to earn subsistence for their family. Political leaders and ministers appoint their nominees in various public councils, committees and without due consideration to merit and qualifications. We all hoped that government of K P Oli government would overthrow culture of nepotism. But it has continued with it.

Some months ago, while addressing the 73rd plenary session of the United Nations General Assembly in New York, Prime Minister KP Sharma Oli stressed that Nepal is moving towards an egalitarian and just society. He has also adopted a motto of ‘Prosperous Country, Happy Nepali.’ As he was delivering this speech, back home thousands of Nepalis were lining up to take flight to Malaysia, Qatar or Saudi Arabia and some were returning home in coffins.

Thousands of girls and women are entrapped in vicious cycle of abuse and prostitution. When he was claiming “nobody will die of hunger and cold in the country” on the occasion of 297th Prithvi Jayanti, nearly a dozen of poor people died on that very day because of hunger and severe cold.  Shamefully, security officials and leaders have failed to book the rapists and murderers of Nirmala Panta.

When Oli took stand against 2015 blockade, we cheered him. We thought he would be the person to change the face of Nepal. Now that he is power, we have realized those hopes were misplaced.  If he wants to make our country prosperous on the foundation of corruption and misrule, he will surely fail.

NEA earns profits of Rs 8.50 billion in Q1, leakage reduction and energy export are the main contributing factors
9 minutes ago